Cooper University Hospital is a provider of health services, medical education, and clinical research in southern New Jersey and the Delaware Valley, in the United States. The hospital is a clinical campus of the University of Medicine and Dentistry of New Jersey – Robert Wood Johnson Medical School at Camden, New Jersey and offers training programs for medical students, residents, fellows, nurses, and allied health professionals in a variety of specialties.

The Trauma Center at Cooper University Hospital was established in 1982 and is one of only three New Jersey State-Designated Level I Trauma Centers. It is certified by the American College of Surgeons[1] and serves as the regional trauma center for southern New Jersey including Atlantic, Burlington, Camden, Cape May, Cumberland, Gloucester, Mercer, Ocean and Salem counties and acts as a resource for the Level II Trauma Centers in the South Jersey region. A Level I Trauma Center cares for severely injured patients including persons involved in motor vehicle crashes, falls, and assaults with guns, knives, or other blunt objects. On average, Cooper treats more than 2,700 trauma patients each year, making it the busiest center in New Jersey.

The hospital launched the only medical evacuation helicopter service in Cumberland County during December 2010. [2] 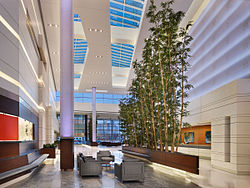 Cooper University Hospital's pavilion project is part of the hospital's efforts to create a regional health science campus in Camden, which will also include a new $130 million Academic and Research Building, as well as a stem cell institute, cancer institute, clinical research building, clinical office building and additional off-street parking.

Designed by EwingCole of Philadelphia, the patient pavilion opened in December 2008 and the hospital's orientation was shifted from Haddon Avenue to Martin Luther King Boulevard, as visitors began entering the hospital through the new lobby and utilizing the Camden County Improvement Authority parking, which connects to the hospital via an enclosed walkway.

The origins of Cooper University Hospital can be traced to 1887, when a prominent Quaker family named Cooper opened a hospital to provide medical care for the population of Camden. Richard M. Cooper, M.D., four of his brothers and sisters and one nephew donated money and land for the hospital to be built between Sixth and Seventh Streets, from Mickle to Benson Streets. Though the four-story, stone building was completed in 1877, the original 30-bed hospital stood empty for 10 years until enough money was available to open for patients in August 1887.

In the first 100 years of the hospital's existence, additions to the original building and the construction of freestanding structures on the surrounding 5 acres (20,000 m2) of land further anchored the Cooper Hospital campus in Camden. Eventually the small community hospital turned into a 540-bed regional tertiary care center that cared for the population's most critically ill patients.

In April 2007, Cooper University Hospital treated New Jersey Governor Jon S. Corzine who had suffered an open femur fracture and severe chest injuries due to a car accident on the Garden State Parkway.