The Conestoga Parkway is a freeway in the Regional Municipality of Waterloo, in the Canadian province of Ontario. It runs northeast/southwest through the cities of Kitchener and Waterloo, and is connected to Highway 401 via the Highway 8 Freeport Diversion and King Street East.

The multiplex of Highway 7 and Highway 8 enters the city of Kitchener as a controlled-access freeway from the west; it takes on the name Conestoga Parkway at the Trussler Road exit at the western edge of the city. The Parkway (and the multiplex) continues east until Highway 8 (as the Freeport Diversion) branches off toward the southeast via an interchange. At this point, the Conestoga Parkway turns northward and becomes Highway 7. 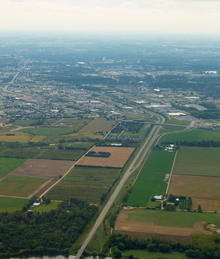 At the Victoria Street exit, the Parkway sheds its Highway 7 designation and becomes Highway 85 (which had been known as Highway 86 until May 1, 2003). It continues through the city of Waterloo towards St. Jacobs, where the freeway alignment ends and becomes Regional Road 85, or Arthur Street South.

While it is officially known as the Conestoga Parkway, it is often referred to by locals as the Conestoga Expressway or simply The Expressway. The name no longer appears on signage, however, and is little known outside the immediate area.

Note that the Parkway is merely a controlled-access portion of the various numbered highways, all of which continue for some distance as open-access highways beyond the freeway section. Thus, the freeway has the distinction of being one of the few Ontario-maintained freeways not numbered according to the 400-Series Highway network, even though it is busier and wider than many rural 400-series highways, because the freeway upgrade has put together only parts of existing routes. The 400-series highways are intended to be full freeways for their entire length.

The speed limit on the Conestoga Parkway is 90 km/h (55 mph). It was previously 100 km/h, but was lowered due to collisions across the median. Highway 7/8 between Courtland Avenue and Fischer-Hallman Road has an abnormally narrow median, and overpasses are single structures with simple curbs as median dividers instead of the usual Jersey barrier or Ontario tall-wall. The portion of Highway 7/8 (from Trussler Road to Wilmot Centre Road/Foundry Street) converted into a freeway in the 1990s does not have this deficiency, nor do the portions of the Parkway signed as Highways 7 and 85.

The Conestoga Parkway facing northbound at the Kitchener–Waterloo boundary

The parkway is one of the busiest roads in the region. It was completed as a four-lane freeway in the late 1960s, with the exception of the short eight-lane collector-express system serving Highway 7/Victoria Street and Wellington Street. The interchange between Highway 8 and the Conestoga Parkway was opened in 1970. Mainline traffic on Highway 8 could continue under the Conestoga, where the route defaults to King Street, to enter downtown Kitchener. The Conestoga east/north of this junction serves as a bypass of King Street.

In 1993, a four-lane extension to Baden was opened, linking up with an existing undivided four-lane expressway at New Hamburg.

Since the late 1990s, the Conestoga has undergone extensive reconstruction between Courtland Avenue and Lancaster Street, with the addition of an Ontario "tall-wall" concrete median barrier and high-mast lighting replacing the conventional mercury truss lights. The widening project resulted that stretch of the Parkway being expanded to at least six lanes by using the grass median, and eight lanes between Highway 8 and Victoria Street/Frederick Street by using the right-of-way afforded by the shoulders. In 2004, extensive improvements were completed around the former obsolete and bottlenecked "half-cloverleaf" junction with the freeway section of Highway 8, that links it to the 401. This included a new flyover semi-directional ramp from Conestoga westbound to Highway 8 eastbound, while the ramp in the opposite direction was realigned to allow it to carry two lanes of traffic at a higher speed. 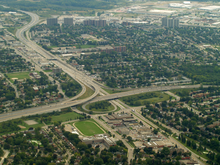 An observation which may seem odd for those new to the highway is the stark difference in the congested, inefficient exit for Highway 7/Victoria Street, when compared with the high-capacity but underused Wellington Street exit just north of it. Both exits are served by a collector-express system. This is due to the 'foresight' that Highway 7 would be redirected as a controlled-access highway and attached to the existing Wellington Street interchange; these plans have languished for over 30 years and are still in the planning stages.

Opposition has arisen due to the new alignment of Highway 7 passing through environmentally sensitive lands. The new Highway 7 freeway proposal linking up the Conestoga in Waterloo and the Hanlon Parkway in Guelph bypasses the existing Highway 7/Victoria Street. The plans also call for a complex 4-level interchange with the Conestoga Parkway and Wellington Street, a rarity outside of the Greater Toronto Area. Its $25 million cost represents a quarter of the $100 million budget for the total project, with the high cost partly due to the difficulty in land acquisition to accommodate the flyover ramps.

In addition to the proposed Highway 7 freeway between Waterloo and Guelph, the MTO has long term plans to widen and reroute Highway 7/8 westward to Stratford. How this will affect the village of Shakespeare, which the open highway currently bisects, is a particular sticking point.

The Conestoga Parkway interchanges with the Freeport Diversion. The flyover was constructed to remedy a partial cloverleaf infamous for weaving.

The following is a list of exits along the parkway. The exits on Conestoga Parkway are not numbered, and likely never will be due to the multiple designations used, which would make it impossible to have consistent kilometre posts.

At this point, the divided freeway and Highway 85 (formerly Highway 86 until 2003) ends, and Arthur Street S. (Waterloo Regional Road 85) begins to St.Jacobs and Elmira.