North Greenwich is a station on London Underground's Jubilee Line, opened on 14 May 1999.[3]

Despite its name, North Greenwich is not in the area historically known as North Greenwich, on the Isle of Dogs, north of the river; an entirely different North Greenwich station used to be there, between 1872 and 1926. It is adjacent to The O2 (formerly the Millennium Dome) at the northern end of the Greenwich peninsula, on the south bank of the River Thames. The tube station is actually closer to Charlton than to Maritime Greenwich. However it is at the northernmost tip of the London Borough of Greenwich, which perhaps provides the best explanation of the name.

North Greenwich is one of the largest stations on the Jubilee Line, capable of handling around 20,000 passengers an hour, having been designed to cope with the large number of visitors expected at the Millennium Dome (now The O2) during 2000, between Canary Wharf and Canning Town on the Jubilee Line, in Travelcard Zones 2 and 3.

The track around North Greenwich was designed to facilitate an extension of the line from this station. A tentatively-planned second extension would most probably head towards Thamesmead; this proposal, however, is of lower priority than Crossrail and may not proceed in the foreseeable future. 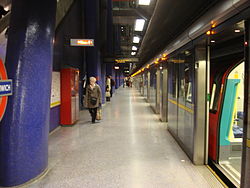 The striking blue-tiled and glazed interior, with raking concrete columns rearing up inside the huge underground space, was designed by the architectural practice Alsop, Lyall and Störmer. Images are available from the Commission for Architecture and the Built Environment (CABE) case study.[4]

A cable car over the River Thames is currently under construction, running from a station close to North Greenwich tube station to the Royal Victoria Dock.[5]

Next to the tube station is the North Greenwich bus station—with services to the following destinations: