The U.S. Virgin Islands consist of the main islands of Saint Croix, Saint John, and Saint Thomas, along with the much smaller but historically distinct Water Island, and many other surrounding minor islands. The total land area of the territory is 133.73 square miles (346.4 km2).

As of the 2000 census the population was 108,612,[3] mostly composed by those of Afro-Caribbean descent. Tourism is the primary economic activity, although there is a significant manufacturing sector.

Formerly the Danish West Indies, they were sold to the United States by Denmark in the Treaty of the Danish West Indies of 1916. They are classified by the UN as a Non-Self-Governing Territory, and are currently an organized, unincorporated United States territory. The U.S. Virgin Islands are organized under the Revised Organic Act of 1954, and have since held five constitutional conventions. The last proposed Virgin Islands Constitution of 2009 was addressed by Congress in 2010 and sent back to the territory, where the convention will reconvene in the near future to address the concerns Congress has had with the proposed document.

The Virgin Islands were originally settled by the Ciboney, Carib, and Arawaks. The islands were named by Christopher Columbus on his second voyage in 1493 for Saint Ursula and her virgin followers. Over the next two hundred years, the islands were held by many European powers, including Spain, the United Kingdom, the Netherlands, France, and Denmark-Norway.

The Danish West India Company settled on Saint Thomas in 1672, on Saint John in 1694, and purchased Saint Croix from France in 1733.[citation needed] The islands became royal Danish colonies in 1754, named the Danish-Westindian islands (Danish: De dansk-vestindiske øer).[4] Sugarcane, produced by slave labor, drove the islands' economy during the 18th and early 19th centuries, until the abolition of slavery by Governor Peter von Scholten on July 3, 1848.

For the remainder of the period of Danish rule, the islands were not economically viable and significant transfers were made from the Danish state budgets to the authorities in the islands. In 1867 a treaty to sell Saint Thomas and Saint John to the United States was agreed, but the sale was never effected.[5] A number of reforms aimed at reviving the islands' economy were attempted, but none had great success. A second draft treaty to sell the islands to the United States was negotiated in 1902 but was narrowly defeated in the Danish parliament.[5]

The onset of World War I brought the reforms to a close and again left the islands isolated and exposed. During the submarine warfare phases of the First World War, the United States, fearing that the islands might be seized by Germany as a submarine base, again approached Denmark with a view to buying them. After a few months of negotiations, a selling price of $25 million (This is equivalent to $428,000,000 in 2010 dollars[6]) was agreed.[citation needed] At the same time the economics of continued possession weighed heavily on the minds of Danish decision makers, and a bipartisan consensus in favor of selling emerged in the Danish parliament.

The Treaty of the Danish West Indies was signed in August 1916,[7] with a Danish referendum held in December 1916 to confirm the decision. The deal was finalized on January 17, 1917, when the United States and Denmark exchanged their respective treaty ratifications. The US took possession of the islands on March 31, 1917 and the territory was renamed the Virgin Islands of the United States.[citation needed] US citizenship was granted to the inhabitants of the islands in 1927.

Water Island, a small island to the south of Saint Thomas, was initially administered by the US federal government and did not become a part of the U.S. Virgin Islands territory until 1996, when 50 acres (200,000 m2) of land was transferred to the territorial government. The remaining 200 acres (81 ha) of the island were purchased from the U.S. Department of the Interior in May 2005 for $10, a transaction which marked the official change in jurisdiction.[8] 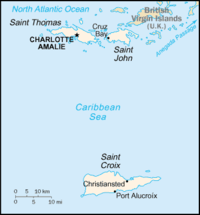 Map of the US Virgin Islands

The US Virgin Islands are in the Caribbean Sea and the Atlantic Ocean, about 40 miles (64 km) east of Puerto Rico and immediately west of the British Virgin Islands. The territory consists of four main islands: Saint Thomas, Saint John, Saint Croix, and Water Island, as well as several dozen smaller islands. The main islands have nicknames often used by locals: "Twin City" (St. Croix), "Rock City" (St. Thomas) and "Love City" (St. John).[9] The combined land area of the islands is roughly twice the size of Washington, D.C.

The US Virgin Islands are known for their white sand beaches, including Magens Bay and Trunk Bay, and strategic harbors, including Charlotte Amalie and Christiansted. Most of the islands, including Saint Thomas, are volcanic in origin and hilly. The highest point is Crown Mountain, Saint Thomas (1,555 ft/474 m). Saint Croix, the largest of the US Virgin Islands, lies to the south and has a flatter terrain. The National Park Service owns more than half of Saint John, nearly all of Hassel Island, and many acres of coral reef. (See also Virgin Islands National Park, Virgin Islands Coral Reef National Monument, Buck Island Reef National Monument, Christiansted National Historic Site, and Salt River Bay National Historical Park and Ecological Preserve.)

The Virgin Islands lie on the boundary of the North American plate and the Caribbean Plate. Natural hazards include earthquakes and tropical cyclones (including hurricanes). 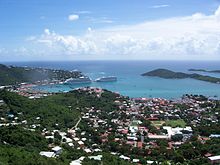 At the national level, the U.S. Virgin Islands elect a delegate to Congress from their at-large congressional district. However, the elected delegate, while able to vote in committee, cannot participate in floor votes. The current House of Representatives delegate is Donna Christensen (D).

The U.S. Virgin Islands have elected a territorial governor every four years since 1970. Previous governors were appointed by the President of the United States.

The U.S. Virgin Islands are on the United Nations list of Non-Self-Governing Territories. A 1993 referendum on status attracted only 31.4% turnout, and so its results (in favor of the status quo) were considered void. No further referenda have been scheduled since.

In 2004, the 25th legislature established the Fifth Constitutional Convention. In June 2009, Governor John deJongh, Jr. rejected the resulting draft constitution, saying that the document "violates federal law, fails to defer to federal sovereignty and disregards basic civil rights".[11] However, a lawsuit filed by members of the Fifth Constitutional Convention to force Governor deJongh to forward the document to President Barack Obama was ultimately successful. The president forwarded the proposal to Congress—which then had 60 days to approve or reject the document—in May 2010, along with a report noting concerns raised by the Justice Department and restating the issues noted by Governor deJongh. A Congressional resolution disapproving of the proposed constitution and requesting that the Fifth Constitutional Convention reconvene to consider changes to address these issues was signed into law by President Obama on June 30, 2010.[12][13]

There is a bill pending Senate approval in the United States Congress that would lift the ban[clarification needed] and thus authorize the United States Secretary of the Interior to extend technical assistance grants and other assistance to facilitate a political status public education program in the US Virgin Islands, Guam and American Samoa.[14]

A federal lawsuit in the District Court of the Virgin Islands is currently pending to provide Virgin Islanders with the fundamental right to be represented in Congress and vote for U.S. President. The case is Civil No. 3:11-cv-110, Charles v. U.S. Federal Elections Commission. The case alleges it was racial discrimination present in a all white and segregated Congress of 1917 that was the impetus to deny the right to vote to a majority non-white constituency. 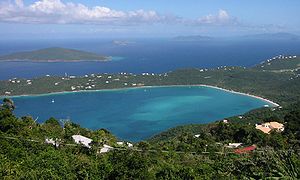 Tourism is the primary economic activity. The islands normally host 2 million visitors a year, many of whom visit on cruise ships.

The manufacturing sector consists of petroleum refining, textiles, electronics, rum distilling, pharmaceuticals, and watch assembly. The agricultural sector is small, with most food being imported. International business and financial services are a small but growing component of the economy. Hovensa, one of the world's largest petroleum refineries, is located on Saint Croix. 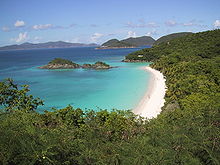 There were 40,648 households out of which 34.7% had children under the age of 18 living with them, 33.2% were married couples living together, 24.9% had a female householder with no husband present, and 34.5% were non-families. 30.2% of all households were made up of individuals and 6.3% had someone living alone who was 65 years of age or older. The average household size was 2.64 and the average family size was 3.34.

Most US Virgin Islanders descend from Africans, who were enslaved and brought to the Caribbean by Europeans to labor on sugar plantations. Most of the residents were born in the islands, although many migrated to the U.S. Virgin Islands from other islands in the West Indies, the United States and other countries.[citation needed]

The official language is English, although Virgin Islands Creole, an English-based dialect, is spoken in informal situations. The Virgin Islands Creole spoken on St. Croix, known as Crucian, is slightly different from that spoken on St. Thomas and St. John. Because the U.S. Virgin Islands are home to thousands of immigrants from across the Caribbean, Spanish and various French creole languages are also widely spoken. As of the 2000 census, 25.3% of persons over the age of five speak a language other than English at home.[17]

As in most Caribbean countries, Christianity is the dominant religion in the Virgin Islands. In a reflection of the territory's Danish colonial heritage, Protestantism is most prevalent.[citation needed] There is also a strong Roman Catholic presence.[citation needed] 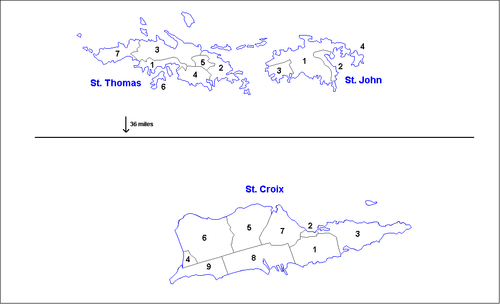 Districts and sub-districts of the United States Virgin Islands

The US Virgin Islands are administratively divided into three districts and subdivided into 20 sub-districts.

The Henry E. Rohlsen International Airport serves St. Croix and the Cyril E. King International Airport serves St. Thomas and St. John. The U.S. Virgin Islands are the only United States territory which drives on the left. This was inherited from what was then-current Danish practice at the time of annexation, to limit losses of livestock. However, as most cars being imported from the mainland United States are left-hand drive, the driver sits to the outside of the road, raising traffic safety issues.

The University of the Virgin Islands provides higher education leading to associate's, bachelor's, and master's degrees, with campuses on St. Thomas and St. Croix.