Mignet Pou-du-Ciel
This article is about the aircraft. For the Flying Flea motorcycle, see Royal Enfield WD/RE.

The Flying Flea (Pou du Ciel literally "Louse of the Sky" in French) is a large family of light homebuilt aircraft first flown in 1933.

The Flying Flea family of aircraft was designed by Frenchman Henri Mignet.[2]

Between 1920 and 1928, Mignet built various prototypes from the HM.1 to the HM.8, a monoplane that was the first of his designs that really flew. Between 1929 and 1933, he continued building prototypes, and testing them in a large field near Soissons.[3]

In 1933, Mignet successfully flew for the first time in his HM.14, the original flying flea, and publicly demonstrated it. In 1934, he published the plans and building instructions in his book Le Sport de l'Air. In 1935, it was translated into English and serialised in Practical Mechanics, prompting hundreds of people to build their own Flying Fleas.[4]

Mignet made the aircraft intentionally simple. The Flying Flea is essentially a highly staggered biplane, which almost could be considered to be a tandem wing aircraft, built of wood and fabric. The original design was a single-seater, and had two-axis flying controls. The aircraft had a standard control stick. Fore-and-aft movement controlled the front wing's angle of attack, increasing and decreasing the lift of the wing. Because the front wing was located forward of the center of gravity, that would pitch the nose up and down.[5]

Side-to-side movement of the stick controlled the large rudder. This produced a rolling motion because the wings both had substantial dihedral, through yaw-roll coupling. The rudder had to be quite large not only to produce adequate roll but also because the fuselage was very short, reducing the leverage of the rudder. The Flying Flea, being a two axis aircraft, could not be landed or taken off in substantial crosswinds. This was not a big issue when the aircraft was designed because at that time aircraft were usually flown from large open fields allowing all take-offs and landings into wind.[5][3]

Mignet claimed that anyone who could build a packing case and drive a car could fly a Flying Flea. 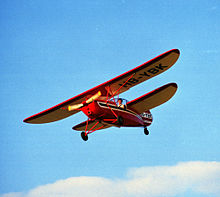 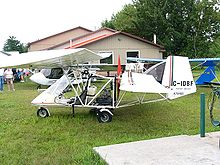 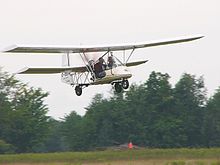 In the 1930s, many Fleas crashed when pilots could not recover from shallow dives, resulting in some deaths. As a result, Flying Fleas were grounded and even banned from flight permanently in some countries.[5] In the United Kingdom, restrictions were placed on Flying Fleas, following a fatal crash on 4 May 1936 at an air display at Penshurst Airfield, Kent.[11]

Mignet had not encountered this problem during his testing of his prototype, because he could not afford a large horsepower engine. When builders started putting larger engines on them and expanding the flight envelope, the wing interference problem surfaced.[5]

The Royal Aircraft Establishment in the United Kingdom and the French Air Ministry conducted full-scale wind tunnel tests, and discovered the problem. Their investigations resulted in changes to the airfoil used and the spacing of the wings to prevent aerodynamic interference. Later Mignet Flea designs incorporated these changes.[5]

By 1939, there were many improved Flying Fleas in the air, but the aircraft never completely overcame its dangerous reputation.[5]

Shortly after the plans appeared in 1934, many enthusiasts in Europe and the USA began to build their own aircraft. In France there were at least 500 completed. The average cost of materials was then $350.

Modern aircraft enthusiasts have continued to build their own aircraft, and vary the original HM.14 design and its derivatives over the years, and outside the UK, they are successfully flown in countries like Australia. French enthusiasts, for example, hold an annual meeting every June. 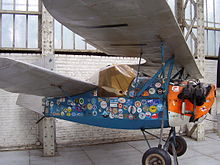