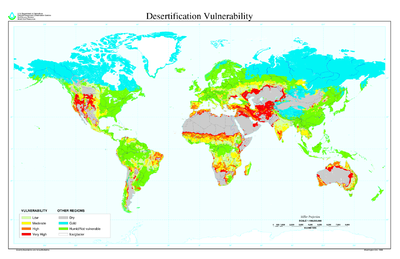 The United Nations Convention to Combat Desertification in Those Countries Experiencing Serious Drought and/or Desertification, Particularly in Africa is a Convention to combat desertification and mitigate the effects of drought through national action programs that incorporate long-term strategies supported by international cooperation and partnership arrangements.

The Convention, the only convention stemming from a direct recommendation of the Conference's Agenda 21, was adopted in Paris on 17 June 1994 and entered into force in December 1996. It is the first and only internationally legally binding framework set up to address the problem of desertification. The Convention is based on the principles of participation, partnership and decentralization - the backbone of Good Governance and Sustainable Development. It now has 194 country Parties to the Convention, making it truly global in reach.

Non-parties are Iraq, Montenegro, Vatican City and the states with limited recognition.

The permanent Secretariat of the UNCCD was established during the first Conference of the Parties (COP 1) held in Rome in 1997. It has been located in Bonn, Germany since January 1999, and moved from its first Bonn address in Haus Carstanjen to the new UN campus in July 2006.

The functions of the secretariat are to make arrangements for sessions of the Conference of the Parties (COP) and its subsidiary bodies established under the Convention and to provide them with services as required. One key task of the secretariat is to compile and transmit reports submitted to it.

The secretariat also provides assistance to affected developing country Parties, particularly those in Africa. This is important when compiling information and reports required under the Convention. UNCCD activities are coordinated with the secretariats of other relevant international bodies and conventions, like those of the UN Framework Convention on Climate Change (UNFCCC) and the Convention on Biological Diversity (CBD).

The Conference of the Parties (COP)

The Conference of the Parties (COP) oversees the implementation of the Convention. It is established by the Convention as the supreme decision-making body, and it comprises all ratifying governments. The first five sessions of the COP were held annually from 1997 to 2001.

Starting 2001 sessions are held on a biennial basis interchanging with the sessions of the Committee for the Review of the Implementation of the Convention (CRIC), whose first session was held in 2002.

The tenth session of the COP (COP 10) is going to take place at Gyeongnam (South Korea).[3]

Committee on Science and Technology (CST)

The UN Convention to Combat Desertification has established a Committee on Science and Technology (CST). The CST was established under Article 24 of the Convention as a subsidiary body of the COP, and its mandate and terms of reference were defined and adopted during the first session of the Conference of the Parties in 1997. It is composed of government representatives competent in the fields of expertise relevant to combating desertification and mitigating the effects of drought. The committee identifies priorities for research, and recommends ways of strengthening cooperation among researchers. It is multi-disciplinary and open to the participation of all Parties. It meets in conjunction with the ordinary sessions of the COP.

The CST collects, analyses and reviews relevant data. It also promotes cooperation in the field of combating desertification and mitigating the effects of drought through appropriate sub-regional, regional and national institutions, and in particular by its activities in research and development, which contribute to increased knowledge of the processes leading to desertification and drought as well as their impact.

The Bureau of the CST is composed of the Chairperson and the four Vice Chairpersons. The chairman is elected by the Conference of the Parties at each of its sessions with due regard to ensure geographical distribution and adequate representation of affected Country Parties, particularly those in Africa, who shall not serve for more than two consecutive terms. The Bureau of the CST is responsible for the follow-up of the work of the Committee between sessions of the COP and may benefit from assistance of ad hoc panels established by the COP.

The CST also contributes to distinguishing causal factors, both natural and human, with a view to combating desertification and achieving improved productivity as well as the sustainable use and management of resources.

The Group of Experts plays an important institutional role, providing the CST with information on the current knowledge, the extent and the impact, the possible scenarios and the policy implications on various themes assigned in its work programme. The results of the work performed by the GoE are widely recognized and include dissemination of its results on ongoing activities (benchmarks and indicators, traditional knowledge, early warning systems).

The Group of Experts develops and makes available to all interested people information on appropriate mechanisms for scientific and technological cooperation and articulates research projects, which promote awareness about desertification and drought between countries and stakeholders at the international, regional and national level.

The Group of Experts seeks to build on and use existing work and evidence to produce pertinent synthesis and outputs for the use of the Parties to the Convention and for the broader dissemination to the scientific community. The programme of work and its mandate is pluri-annual in nature, for a maximum of four years.