Henipavirus is a genus of the family Paramyxoviridae, order Mononegavirales containing two established species, Hendra virus and Nipah virus. The henipaviruses are naturally harboured by Pteropid fruit bats (flying foxes), and some microbat species.[1] Henipavirus is characterised by a large genome, a wide host range, and their recent emergence as zoonotic pathogens capable of causing illness and death in domestic animals and humans.[2]

In 2009, RNA sequences of three novel viruses in phylogenetic relationship to known Henipaviruses were detected in Eidolon helvum (the African Straw-coloured fruit bat) in Ghana. The finding of these novel putative Henipaviruses outside Australia and Asia indicates that the region of potential endemicity of Henipaviruses extends to Africa.[3]

Henipaviruses are pleomorphic (variably shaped), ranging in size from 40 to 600 nm in diameter.[4] They possess a lipid membrane overlying a shell of viral matrix protein. At the core is a single helical strand of genomic RNA tightly bound to N (nucleocapsid) protein and associated with the L (large) and P (phosphoprotein) proteins which provide RNA polymerase activity during replication.

Embedded within the lipid membrane are spikes of F (fusion) protein trimers and G (attachment) protein tetramers. The function of the G protein is to attach the virus to the surface of a host cell via EFNB2, a highly conserved protein present in many mammals.[5][6] The F protein fuses the viral membrane with the host cell membrane, releasing the virion contents into the cell. It also causes infected cells to fuse with neighbouring cells to form large, multinucleated syncytia.

As with all viruses in the Mononegavirales order, the Hendra virus and Nipah virus genomes are non-segmented, single-stranded negative-sense RNA. Both genomes are 18.2 kb in size and contain six genes corresponding to six structural proteins.[7]

In common with other members of the Paramyxovirinae subfamily, the number of nucleotides in the henipavirus genome is a multiple of six, consistent with what is known as the 'rule of six'. Deviation from the rule of six, through mutation or incomplete genome synthesis, leads to inefficient viral replication, probably due to structural constraints imposed by the binding between the RNA and the N protein.

Henipaviruses employ an unusual process called RNA editing to generate multiple proteins from a single gene. The specific process in henipaviruses involves the insertion of extra guanosine residues into the P gene mRNA prior to translation. The number of residues added determines whether the P, V or W proteins are synthesised. The functions of the V and W proteins are unknown, but they may be involved in disrupting host antiviral mechanisms.

Hendra virus (originally Equine morbillivirus) was discovered in September 1994 when it caused the deaths of thirteen horses, and a trainer at a training complex in Hendra, a suburb of Brisbane in Queensland, Australia.[8]

The index case, a mare, was housed with 19 other horses after falling ill, and died two days later. Subsequently, all of the horses became ill, with 13 dying. The remaining 6 animals were subsequently euthanised as a way of preventing relapsing infection and possible further transmission.[9] Both the trainer, Victory ('Vic') Rail, and a stable hand were involved in nursing the index case and both fell ill within one week of the horse’s death with an influenza-like illness. The stable hand recovered while Mr Rail died of respiratory and renal failure. The source of the virus was most likely frothy nasal discharge from the index case.

A second outbreak occurred in August 1994 (chronologically preceding the first outbreak) in Mackay 1,000 km north of Brisbane resulting in the deaths of two horses and their owner.[10] The owner, Mark Preston, assisted in necropsies of the horses and within three weeks was admitted to hospital suffering from meningitis. Mr Preston recovered, but 14 months later developed neurologic signs and died. This outbreak was diagnosed retrospectively by the presence of Hendra virus in the brain of the patient.[11]

A survey of wildlife in the outbreak areas was conducted, and identified pteropid fruit bats as the most likely source of Hendra virus, with a seroprevalence of 47%. All of the other 46 species sampled were negative. Virus isolations from the reproductive tract and urine of wild bats indicated that transmission to horses may have occurred via exposure to bat urine or birthing fluids.[12]

Four of these outbreaks have spread to humans as a result of direct contact with infected horses. On 26 July 2011 a dog living on the Mt Alford property was reported to have HeV antibodies, the first time an animal other than a flying fox, horse, or human has tested positive outside an experimental situation.[13]

The timing of incidents indicates a seasonal pattern of outbreaks, possibly related to the breeding cycle of the little red flying-foxes. These species typically give birth between April and May.[14][15] As there is no evidence of transmission to humans directly from bats, it is thought that human infection only occurs via an intermediate host, a horse.

It's not clear why there has been a sudden increase in the number of spillover events between June and August 2011. Typically HeV spillover events are more common between May and October. This time is sometimes called "Hendra Season". This is a time when there are large number of fruit bat of all species congregated in SE Queensland as this area contains valuable winter foraging habitat. The weather (warm and humid) is favourable to the survival of henipavirus in the environment.[54]

Other suggestions include that an increase in testing has led to an increase in detection. As the actual mode of transmission between bats and horses has not been determined, it is not clear what, if any, factors can increase the chance of infection in horses.[57]

Following the confirmation of a dog with HeV antibodies, on 27 July 2011, the Queensland and NSW governments will boost research funding into the Hendra virus by $6 million to be spent by 2014/2015. This money will be used for research into ecological drivers of infection in the bats and the mechanism of virus transmission between bats and other species.[58][59] A further 6 million dollars was allocated by the federal government with the funds being split, half for human health investigations and half for animal health and biodiversity research.[60]

The vaccine is intended to be used in horses as stopping the virus at this point should protect both horses and humans.

Flying foxes experimentally infected with the Hendra virus develop a viraemia then excrete the virus in their urine, faeces and saliva for approximately one week. Although they excrete live virus during this time there is no other indication of an illness.[64] Symptoms of Hendra virus infection of humans may be respiratory, including hemorrhage and edema of the lungs, or encephalitic, resulting in meningitis. In horses, infection usually causes pulmonary oedema, congestion and / or neurological signs.[65]

Ephrin B2 has been identified as the main receptor for the heniparviruses. 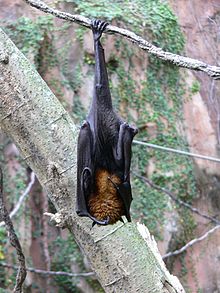 Pteropus vampyrus (Large flying fox), one of the natural reservoirs of Nipah virus

Nipah virus was identified in April 1999, when it caused an outbreak of neurological and respiratory disease on pig farms in peninsular Malaysia, resulting in 257 human cases, including 105 human deaths and the culling of one million pigs.[10][66] In Singapore, 11 cases, including one death, occurred in abattoir workers exposed to pigs imported from the affected Malaysian farms. The Nipah virus has been classified by the Centers for Disease Control and Prevention as a Category C agent.[67] The name "Nipah" is taken after the place, Kampung Nipah in Negeri Sembilan, Malaysia, the source of the human case from which Nipah virus was first isolated.[68]

The outbreak was originally mistaken for Japanese encephalitis (JE), however, physicians in the area noted that persons who had been vaccinated against JE were not protected, and the number of cases among adults was unusual [69] Despite the fact that these observations were recorded in the first month of the outbreak, the Ministry of Health failed to react accordingly, and instead launched a nationwide campaign to educate people on the dangers of JE and its vector, Culex mosquitoes.

Symptoms of infection from the Malaysian outbreak were primarily encephalitic in humans and respiratory in pigs. Later outbreaks have caused respiratory illness in humans, increasing the likelihood of human-to-human transmission and indicating the existence of more dangerous strains of the virus.

Based on seroprevalence data and virus isolations, the primary reservoir for Nipah virus was identified as Pteropid fruit bats, including Pteropus vampyrus (Large Flying Fox), and Pteropus hypomelanus (Small Flying-fox), both of which occur in Malaysia.

The transmission of Nipah virus from flying foxes to pigs is thought to be due to an increasing overlap between bat habitats and piggeries in peninsular Malaysia. At the index farm, fruit orchards were in close proximity to the piggery, allowing the spillage of urine, faeces and partially eaten fruit onto the pigs.[70] Retrospective studies demonstrate that viral spillover into pigs may have been occurring in Malaysia since 1996 without detection.[10] During 1998, viral spread was aided by the transfer of infected pigs to other farms, where new outbreaks occurred.

Eight more outbreaks of Nipah virus have occurred since 1998, all within Bangladesh and neighbouring parts of India. The outbreak sites lie within the range of Pteropus species (Pteropus giganteus). As with Hendra virus, the timing of the outbreaks indicates a seasonal effect. Cases occurring in Bangladesh during the winters of 2001, 2003, and 2004, were determined to have been caused by the Nipah virus.[71] In February, 2011, a Nipah outbreak began at Hatibandha Upazila in the Lalmonirhat district of northern Bangladesh. To date (7 February 2011), there have been 24 cases and 17 deaths in this outbreak.[72]

Nipah virus has been isolated from Lyle's flying fox (Pteropus lylei) in Cambodia[82] and viral RNA found in urine and saliva from P. lylei and Horsfield's roundleaf bat (Hipposideros larvatus) in Thailand.[83] Infective virus has also been isolated from environmental samples of bat urine and partially-eaten fruit in Malaysia.[84] Antibodies to henipaviruses have also been found in fruit bats in Madagascar (Pteropus rufus, Eidolon dupreanum)[85] and Ghana (Eidolon helvum)[86] indicating a wide geographic distribution of the viruses. No infection of humans or other species have been observed in Cambodia, Thailand or Africa thus far.

In humans, the infection presents as fever, headache and drowsiness. Cough, abdominal pain, nausea, vomiting, weakness, problems with swallowing and blurred vision are relatively common. About a quarter of the patients have seizures and about 60% become comatose and might need mechanical ventilation. In patients with severe disease, their conscious state may deteriorate and they may develop severe hypertension, fast heart rate, and very high temperature.

Nipah virus is also known to cause relapse encephalitis. In the initial Malaysian outbreak, a patient presented with relapse encephalitis some 53 months after his initial infection. There is no definitive treatment for Nipah encephalitis, apart from supportive measures, such as mechanical ventilation and prevention of secondary infection. Ribavirin, an antiviral drug, was tested in the Malaysian outbreak, and the results were encouraging, though further studies are still needed.

In animals, especially in pigs, the virus causes a porcine respiratory and neurologic syndrome, locally known as "barking pig syndrome" or "one mile cough."

Nipah virus was the inspiration for the MEV-1 virus in the film Contagion.[87]

The emergence of henipaviruses parallels the emergence of other zoonotic viruses in recent decades. SARS coronavirus, Australian bat lyssavirus, Menangle virus and probably Ebola virus and Marburg virus are also harbored by bats and are capable of infecting a variety of other species. The emergence of each of these viruses has been linked to an increase in contact between bats and humans, sometimes involving an intermediate domestic animal host. The increased contact is driven both by human encroachment into the bats’ territory (in the case of Nipah, specifically pigpens in said territory) and by movement of bats towards human populations due to changes in food distribution and loss of habitat.

There is evidence that habitat loss for flying-foxes, both in South Asia and Australia (particularly along the east coast) as well as encroachment of human dwellings and agriculture into the remaining habitats, is creating greater overlap of human and flying fox distributions.