Ralph Edmond Stanley was born, grew up, and lives today in rural southwestern Virginia—"in a little town called McClure at a place called Big Spraddle, just up the holler" from where he moved in 1936 and has lived ever since in Dickenson County.[1] The son of Lee and Lucy Stanley, Ralph did not grow up around a lot of music in his home. As he says, his "daddy didn't play an instrument, but sometimes he would sing church music. And I'd hear him sing songs like 'Man of Constant Sorrow,' 'Pretty Polly' and 'Omie Wise.'"[1]

He learned to play the banjo, clawhammer style, from his mother:

"She had 11 brothers and sisters, and all of them could play the five-string banjo. She played gatherings around the neighborhood, like bean stringin's. She tuned it up for me and played this tune, 'Shout Little Luly,' and I tried to play it like she did. But I think I developed my own style of the banjo."[1]

He graduated from high school on May 2, 1945 and was inducted into the Army on May 16, serving "little more than a year." He immediately began performing when he got home:

". . . my daddy and Carter picked me up from the (station), and Carter was playing with another group, Roy Sykes and the Blue Ridge Mountain Boys, and they had a personal appearance that night. So I sung a song with Carter on the radio before I even got home."[2]

After initially considering a course in "veterinary," he decided to throw in with his older guitar-playing brother, Carter, and form the Clinch Mountain Boys, in 1946. Drawing heavily on the musical traditions of the area, which included the unique minor-key singing style of the Primitive Baptist Universalist church and the sweet down-home family harmonies of the Carter Family, the Stanleys began playing on local radio stations. They first performed at Norton, Virginia's WNVA, but didn't stay long there, moving on instead to Bristol, Virginia and WCYB to start the show Farm and Fun Time where they stayed "off and on for 12 years."[2]

Initially covering "a lot of Bill Monroe music", they soon "found out that didn't pay off—we needed something of our own. So we started writing songs in 1947, 1948. I guess I wrote 20 or so banjo tunes, but Carter was a better writer than me."[2] When Columbia Records signed the Stanley Brothers, Bill Monroe left in protest and joined Decca. Later, the Stanleys split up and Carter went to sing for the "Father of Bluegrass." Asked how Monroe could be mad at the Stanley Brothers at one point and then hire Carter for his band, Ralph explained: "He knew Carter would make him a good singer. . . Bill Monroe loved our music and loved our singing."[2]

The Stanley Brothers joined King Records in the late '50s, a record company so eclectic it included James Brown at the time. In fact he and his band were in the studio when the brothers recorded "Finger Poppin' Time." "James and his band were poppin' their fingers on that" according to Ralph.[2] It was at King Records that they "went to a more 'Stanley style,' the sound that people most know today."[2]

Ralph and Carter performed as The Stanley Brothers with their band, the Clinch Mountain Boys from 1946 to 1966.

After Carter died of complications of cirrhosis in 1966, after failing for "a year or so,"[2] Ralph faced a hard decision on whether to continue performing on his own. "I was worried, I didn't know if I could do it by myself. But boy, I got letters, 3,000 of 'em, and phone calls . . . I went to Syd Nathan at King and asked him if he wanted me to go on, and he said, 'Hell yes! You might be better than both of them.'"[3] 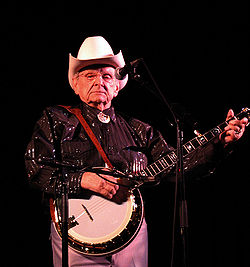 He decided to go it alone, eventually reviving the Clinch Mountain Boys. Larry Sparks, Roy Lee Centers, and Charlie Sizemore were among those with whom he played in the revived band. He encountered Ricky Skaggs and Keith Whitley arriving late to his own show: "They were about 16 or 17, and they were holding the crowd 'til we got there. . . They sounded just exactly like (the Stanley Brothers)."[4] Seeing their potential, he hired them "to give 'em a chance", even though that meant a seven-member band.[2] Eventually, his son Ralph Stanley II, took over as lead singer and rhythm guitarist for the Clinch Mountain Boys.[5]

Around 1970, he ran for Clerk of Court and Commissioner of Revenue in Dickenson County only to state this:

"What happened is, somebody traded me off--they used my popularity and money to elect somebody else. I was done dirty. And I'm so proud that I was done dirty, because if I had been elected . . . I woulda had a job to do . . . maybe woulda finally quit (music). So that's one time I was done dirty and I want to thank them for it now."[4]

O Brother, Where Art Thou?

Stanley's work was featured in the 2000 film O Brother, Where Art Thou?, in which he sings the Appalachian dirge "O Death." The soundtrack's producer was T-Bone Burnett. Stanley said the following about working with Burnett:

"T-Bone Burnett had several auditions for that song. He wanted it in the Dock Boggs style. So I got my banjo and learned it the way he did it. You see, I had recorded 'O Death' three times, done it with Carter. So I went down with my banjo to Nashville and I said, 'T-Bone, let me sing it the way I want to sing it,' and I laid my banjo down and sung it a cappella. After two or three verses, he stopped me and said, 'That's it.'"[4]

With that song, Stanley won a 2002 Grammy Award in the category of Best Male Country Vocal Performance. "That put the icing on the cake for me," he says. "It put me in a different category."[4]

Known in the world of bluegrass music by the popular title, "Dr. Ralph Stanley" (after being awarded an honorary Doctorate of Music from Lincoln Memorial University in Harrogate, Tennessee in 1976), Stanley was inducted into the International Bluegrass Music Hall of Honor in 1992 and in 2000, and became the first person to be inducted into the Grand Ole Opry in the third millennium.

He joined producers Randall Franks and Alan Autry for the In the Heat of the Night (TV Series) cast CD “Christmas Time’s A Comin’” performing "Christmas Time's A Comin'" with the cast on the CD released on Sonlite and MGM/UA for one of the most popular Christmas releases of 1991 and 1992 with Southern retailers.

He is featured in the Josh Turner hit song "Me and God," released in 2006. 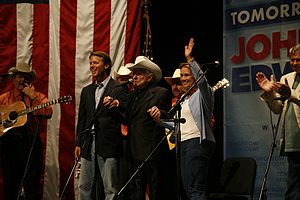 In 2006 he was awarded the National Medal of Arts. On November 10, 2007, Stanley and the Clinch Mountain Boys performed at a rally for presidential candidate John Edwards in Des Moines, Iowa, just prior to the Democratic Party's annual Jefferson-Jackson Day Dinner. Between renditions of "Man of Constant Sorrow" and "Orange Blossom Special," Stanley told the crowd that he had cast his first vote for Harry S. Truman in 1948 and would cast his next for John Edwards in 2008—but after Edwards fell by the wayside, Stanley endorsed Barack Obama on September 9, 2008.[6] In October 2008, the Obama campaign aired a radio ad in Virginia featuring Stanley.[7]

Country singer Dwight Yoakam has stated that Ralph Stanley is one of his "musical heroes."[8]

Stanley's autobiography, Man of Constant Sorrow, coauthored with the music journalist Eddie Dean, was released by Gotham Books on October 15, 2009.[9]

Ralph created a unique style of banjo playing, sometimes called "Stanley Style". It evolved from Scruggs style, which is a three finger technique. "Stanley style" is distinguished by incredibly fast "forward rolls," led by the index finger, sometimes in the higher registers utilizing a capo. In "Stanley Style", the rolls of the banjo are continuous, while being picked fairly close the bridge on the banjo, giving the tone of the instrument a very crisp, articulate snap to the strings as the player would strike them.