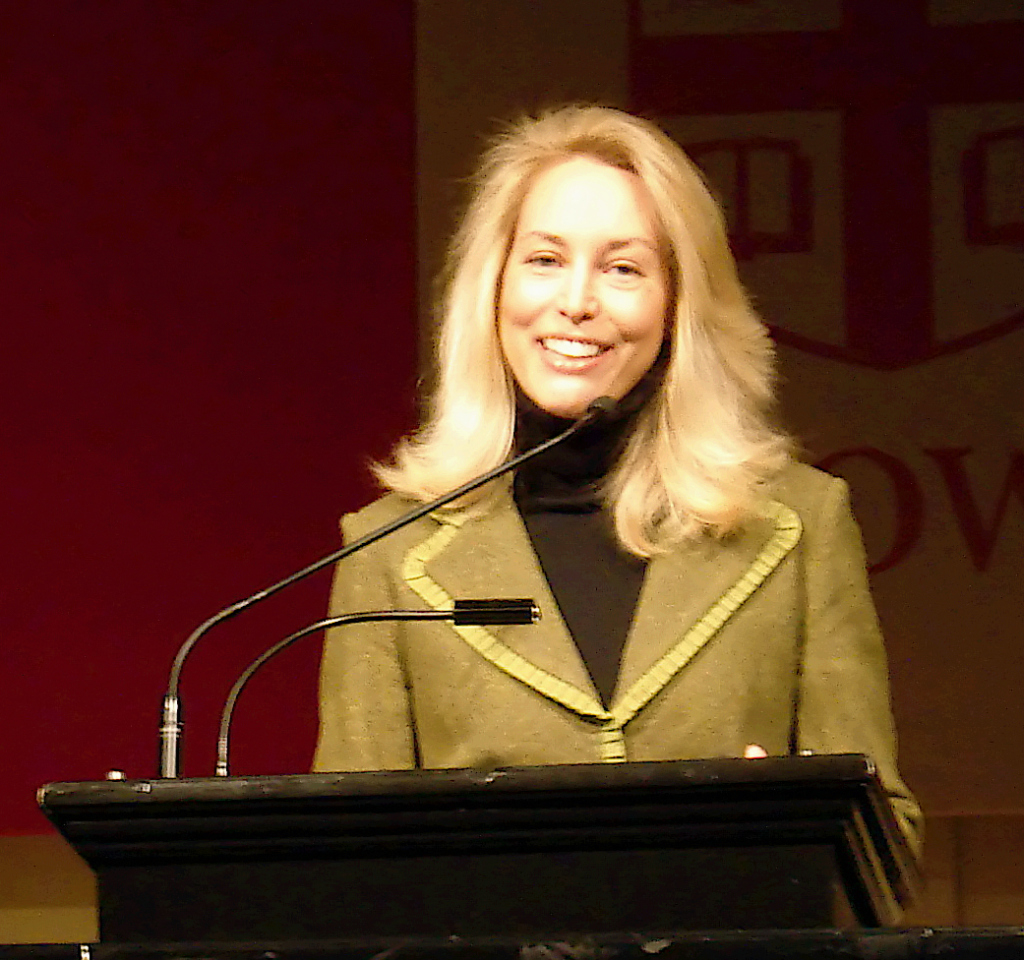 On , identified "Wilson's wife" publicly as "an agency operative on " named "Valerie Plame" in his syndicated column in "".

Novak's public disclosure of Mrs. Wilson's then-still-classified covert CIA identity as "Valerie Plame" precipitated what is known as the , leading to the , which resulted in the , and commuted sentence by President Bush of I. Lewis "Scooter" Libby in "" on charges of , , and making false statements to federal investigators.

Valerie Elise Plame was born on , , on , in , to Diane and Samuel Plame.

Growing up in "a military family ... imbued her with a sense of public duty"; her father was a lieutenant colonel in the , who worked for the for three years, and, according to her "close friend Janet Angstadt," her parents "are the type who are still volunteering for the Red Cross and in the Philadelphia suburb where they live," having moved to that area while Plame was still in school.

She graduated in 1981 from Lower Moreland High School, in ,

By 1991, Plame earned two s, from the London School of Economics and Political Science and the (Collège d'Europe), in , .

After graduating from Penn State in 1985, Plame was briefly married to Todd Sesler, her college boyfriend.

Professionally and socially, she has used variants of her name. Professionally, while a covert CIA officer, she used her given first name and her maiden surname, "Valerie Plame." Since leaving the CIA, as a speaker, she has used the name "Valerie Plame Wilson," and she is referred to by that name in the that the Wilsons brought against former and current government officials, "Plame v. Cheney".

At the time that they met, Wilson relates in his memoir, he was separated from his second wife Jacqueline, a former French diplomat; they d after 12 years of marriage so that he could marry Plame. His divorce had been "delayed because I was never in one place long enough to complete the process," though he and she had already been living separate lives since the mid-90s.

Prior to the disclosure of her classified CIA identity, Valerie and Joe Wilson and their twins lived in the Palisades, an affluent neighborhood of , on the fringe of Georgetown.

Once graduating from college, moving to , and marrying Sesler, she worked at a clothing store while awaiting results of her application to the CIA.

Plame served the CIA as a non-official cover (or NOC), operating undercover in (at least) two positions in and .

A former senior diplomat in Athens remembered Plame in her dual role and also recalled that she served as one of the 'control officers' coordinating the visit of President to and in July 1991.

Part of her work during this time was concerned with determining the use of aluminum tubes purchased by Iraq.

Novak's disclosures in his column, which resulted in Plame's public outing on , , ended her career with the CIA, from which she later resigned in .

Although court s of the Special Counsel and exhibits pursuant to later U.S. Congressional investigations ascertain otherwise, some in the media (Jeff Gannon - White House reporter) questioned whether or not the CIA still considered Plame a covert officer &mdash; that is, the precise nature of her "classified" status or the type of "cover" that she had and whether or not it was "official" or "non-official" &mdash; at the time she was outed in the Novak column of , .

In his press conference of , , Fitzgerald explained in considerable detail the necessity of "secrecy" about his investigation that began in the fall of 2003 &mdash; "when it was clear that Valerie Wilson's cover had been blown" &mdash; and the background and consequences of the of Lewis Libby as it pertains to Valerie E. Wilson.

Fitzgerald's subsequent replies to reporters' questions shed further light on the parameters of the "leak investigation" and what, as its lead prosecutor, bound by "the rules of grand jury secrecy," he could and could not reveal legally at the time. Official court documents released later, on , , reveal that Libby testified that "he was specifically authorized in advance" of his meeting with "" reporter Judith Miller to disclose the "key judgments" of the October 2002 (NIE). According to Libby's testimony, "the Vice President later advised him that the President had authorized defendant to disclose the relevant portions of the NIE [to Judith Miller] ."

A court filing by Libby's defense team argued that Plame was not foremost on the minds of administration officials as they sought to rebut charges made by her husband, that the White House manipulated intelligence to make a case for invasion. The filing indicated that Libby's lawyers did not intend to say he was told to reveal Plame's identity. [ [http://www.nypost.com/news/nationalnews/62399.htm "'Scooter' Won't Play Plame Blame Game"] , "", , , accessed , .] The court filing also stated that "Mr. Libby plans to demonstrate that the indictment is wrong when it suggests that he and other government officials viewed Ms. Wilson's role in sending her husband to as important," indicating that Libby's lawyers planned to call to the stand. According to Rove's lawyer, Fitzgerald has decided against pressing charges against Rove.

On , , Libby was convicted of obstruction of justice, making false statements, and two counts of perjury. He was acquitted on one count of making false statements. He was not charged for revealing Wilson's CIA status. His sentence included a $250,000 fine, 30 months in prison and two years of probation. On , , President commuted Libby's sentence, removing the jail term but leaving in place the fine and , calling the sentence "excessive." [ [http://www.whitehouse.gov/news/releases/2007/07/20070702-4.html Grant of Executive Clemency] ] [ [http://www.whitehouse.gov/news/releases/2007/07/20070702-3.html Statement by the President on Executive Clemency for Lewis Libby] ] In a subsequent press conference, on , , Bush noted, "...the Scooter Libby decision was, I thought, a fair and balanced decision." [ [http://www.whitehouse.gov/news/releases/2007/07/20070712-5.html Press Conference by the President] , , , accessed , .] The Wilsons responded to the commutation in statements posted by their legal counsel, , executive director of (CREW), and on their own legal support website.See also|Joseph C. Wilson#Wilson's reactions to the Libby trial and commutation

On , , Joseph and Valerie Wilson filed a civil lawsuit against Rove, Libby, Vice President , and other unnamed senior White House officials (among whom they later added

On , , two days after the verdict in the Libby trial, Congressman , chair of the , announced that his committee would ask Plame to testify on March 16, in an effort by his committee to look into "whether White House officials followed appropriate procedures for safeguarding Plame's identity." [, [http://www.washingtonpost.com/wp-dyn/content/article/2007/03/09/AR2007030900549.html "Plame to Testify to Congress on Leak"] , "", , , accessed , .]

On , , at these hearings about the disclosure, Waxman read a statement about Plame's CIA career that had been cleared by CIA director Gen. and the CIA, stating that she was undercover and that her employment status with the CIA was classified information prohibited from disclosure under . Wilson served in senior management positions at the CIA, in which she oversaw the work of other CIA employees, and in her various positions at the CIA, had faced significant risks to her personal safety and her life.

Subsequent reports in various news accounts focused on the following parts of her testimony:
*"My name and identity were carelessly and recklessly abused by senior government officials in the White House and state department"; this abuse occurred for "purely political reasons." [ [http://www.guardian.co.uk/usa/story/0,,2035981,00.html "Outed CIA Agent Criticises White House Officials"] , "" , , accessed , .]
*After her identity was exposed by officials in the Bush administration, she had to leave the CIA: "I could no longer perform the work for which I had been highly trained."

Joseph Wilson announced on , that he and his wife had "signed a deal with Warner Bros of Hollywood to offer their consulting services - or maybe more - in the making of the forthcoming movie about the Libby trial," their lives and the CIA leak scandal.

In , the "New York Times" reported that Valerie Wilson agreed to a $2.5 million book deal with , a division of . Steve Ross, senior vice president and publisher of Crown, told the Times that the book would be her "first airing of her actual role in the American intelligence community, as well as the prominence of her role in the lead-up to the war."

On , , various news media reported that Simon and Schuster and Valerie Wilson were suing J. Michael McConnell, Director of National Intelligence, and , Director of the CIA, arguing that the CIA "is unconstitutionally interfering with the publication of her memoir, "", ... set to be published in October [2007] , by not allowing Plame to mention the dates she served in the CIA, even though those dates are public information."

On , , in her "conversation" with broadcast on "" (recorded on , ), she discussed many aspects relating to her memoir: the , "United States v. Libby," the civil suit which she and her husband are still pursuing against Libby, Cheney, Rove, and Armitage, and other matters presented in her memoir relating to her covert work with the CIA.