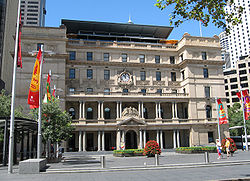 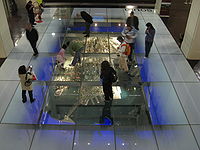 The Customs House is an historic Sydney landmark located in the city's Circular Quay area. Constructed initially in 1844-1845, the building served as the headquarters of the Customs Service until 1990. Ownership was then transferred from the Commonwealth Government of Australia to the City of Sydney Council in 1994, when it became a venue for exhibitions and private functions. After being refurbished in 2003, it has also become the new home of the City of Sydney Library.

The ground floor of the building houses a 4.2m x 9.5m scale model of Sydney's CBD, viewed through a glass floor. The model was built by Modelcraft in 1998 and weighs one tonne. Images of the various versions of the building across its history are also displayed.

People of the Eora tribe are said to have witnessed from the site, in 1788, the landing of the First Fleet. Convict David O'Connor was hanged on the site in 1790 and it is said that his ghost haunts the Customs House to this day, offering people rum.[citation needed]

The driving force behind the construction of the original sandstone edifice on Circular Quay was Colonel John George Nathaniel Gibbes (1787-1873), the Collector of Customs for New South Wales for a record term of 25 years from 1834 to 1859. Colonel Gibbes persuaded the Governor of NSW, Sir George Gipps, to begin construction of the Customs House in 1844 in response to Sydney's growing volume of maritime trade. The building project also doubled as an unemployment relief measure for stonemasons and laborers during an economic depression which was afflicting the colony at the time.

The two-storey Georgian structure was designed by Mortimer Lewis and featured 13 large and expensive windows in the facade to afford a clear view of shipping activity in Sydney Cove. Colonel Gibbes, who dwelt opposite Circular Quay on Kirribilli Point, was able to watch progress on the Customs House's construction from the verandah of his private residence, Wotonga House (now Admiralty House).

The Customs House opened for business in 1845 and replaced cramped premises at The Rocks. It was partially dismantled and expanded to three levels under the supervision of the then Colonial Architect, James Barnet, in 1887. Various additions were made over the next century, particularly during the period of the First World War, but some significant vestiges of the original Gibbes-Lewis building remain.