The Blue Hens are recognized as a perennial power in FCS football and are the only FCS program to average more than 20,000 fans per regular-season home game for each of the past twelve years. Delaware football has consistently outdrawn all college football programs in the Philadelphia metropolitan area, with one exception: Penn State at Temple University in 2007. (Attendance was more than double the normal average.)[1]

The program's long history began in the late 1800s, but the tradition did not truly begin to take shape until the arrival of Bill Murray in 1940. During his 11 seasons at the helm, the Fightin' Blue Hens compiled a record of 49–16–2 with one National Championship in 1946 which culminated in a win over Rollins in the now defunct Cigar Bowl. That was good for an impressive .747 winning percentage. After Murray departed to take over at Duke University in 1950, David M. Nelson came on board as head coach.

During his years at UD, Nelson developed the Delaware Wing-T offensive system. This system, strongly rooted in running the football and deceptive fake hand-offs, became the identity of Delaware football for nearly 50 years. Nelson also brought with him another icon of Delaware football: the "winged" helmet. The iconic "Michigan" style helmet was developed by Nelson's coach at Michigan, Fritz Crisler (who first used the helmet design when he was head coach at Princeton (albeit in black and orange)). Nelson played for Crisler when Crisler was head coach at Michigan, and Nelson brought the helmet design with him where ever he coached (Hillsdale College, Harvard, Maine and Delaware).[2] Nelson stepped down as football coach in 1965, and in his 15 years (1951–1965), the Hens compiled an 84–42–2 (.664) record with one National Championship in 1963 and a bowl win over Kent State in the now defunct Refrigerator Bowl.

In 1966, an assistant football and baseball coach named Harold "Tubby" Raymond took over, and after a rocky start (the team recorded a 2–7 record in his second season) became the face of Delaware football for 36 seasons. While David Nelson developed the Delaware Wing-T, Tubby perfected it. In 36 seasons, the Fightin' Blue Hens were always sure to provide an excitement filled game day experience for their fans. When he retired in 2001, Tubby had racked up 300 wins against 119 losses and three ties, good for a .714 win percentage. His teams earned 14 Lambert Cup Trophies (as the best team in the east in a particular division), four national semi-finals, and three National Championships in 1971, 1972, and 1979. His 300 wins account for nearly half of the 613 football victories in school history. These three men (Murray, Nelson and Raymond) are all enshrined in the College Football Hall of Fame in South Bend, Indiana. Georgia Tech is the only other school to place three consecutive coaches into the College Football Hall of Fame. 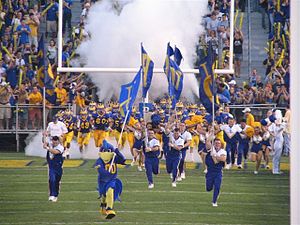 The team has had much success on the field. In addition to the national championships listed above, notable program victories include multiple wins over Navy (including a win at Navy's Homecoming game during a year when they went to a bowl game), Maryland, Rutgers, and Temple. Speculation regularly exists regarding whether the Blue Hens will "move up" to the Football Bowl Subdivision at some point, joining a league such as the Big East Conference. The University of Delaware has more than 60 wins against opponents playing at the highest level, whether that was FBS (since 2006), 1A, or the University level (prior to 1978). However, whereas most I-AA schools move up because of the perception of increased money and prestige, UD has an extremely profitable football program, and it is already well-regarded academically and athletically.

"We're the LSU; we're the Georgia, the Florida of Division I-AA," UD Coach Keeler said in American Football Monthly. "We have every resource. There's some people who have better resources than we do, but in general, the college campus we have is in one of the greatest college towns in America, and the academics ... we led the nation last year in out-of-state applications, more than Michigan or Texas. But that's what this school has become – everybody wants to come to school here."

UD football has a fan following that is just as loyal as many major FBS programs. While most schools at the FCS level can expect 8,000–10,000 fans for a football game on a good day, the Fightin' Blue Hens can expect sellout crowds of over 22,000 at every home contest; they have been among the top programs in attendance for over thirty years. Since Delaware Stadium opened in 1952, it has undergone four major expansions to come to its current capacity of 22,000. (In the 1970s it actually seated over 23,000, but subsequent modifications have reduced the capacity to the current number.) The home attendance record was set in 1973 on October 27 against Temple University with 23,619 fans, and attendance has exceeded 22,000 fans frequently. When the Fightin' Blue Hens have a home game, the stadium population becomes the fourth largest city in Delaware—behind Wilmington, Dover, and Newark itself. Delaware's fan support is so impressive that opposing coaches have said that playing Delaware at Delaware Stadium is the highlight of many of their players collegiate careers. In 2008, based largely on the performance of the Fightin' Blue Hens play in the 2007 season, Sporting News ranked Newark 186 in its list of the 400 Best Sports Cities.[3]

Prior to the 2009 season, the University of Delaware had not scheduled a regular season game versus Delaware State University, the state's other Football Championship Subdivision team. A 2007 guest editorial at ESPN.com's Page 2 claimed that this has to do with the fact that Delaware State is a Historically Black College.[4] Delaware has scheduled and played regular season games against several other Historically Black Colleges and Universities such as Morgan State University and North Carolina A&T.

Delaware and Delaware State did play against each other on November 23, 2007 in Newark, Delaware in the first round of the NCAA Division I National Championship Tournament. The Blue Hens defeated the Hornets 44–7 in front of 19,765 people, the largest playoff crowd in Delaware Stadium history.[5]

On February 25, 2009 Coach K.C. Keeler joined Delaware State University Coach Al Lavan along with school officials and state politicians in Dover, Delaware to announce that their schools had signed on to play the first regular season game in their history. The game was played on September 19, 2009 at the University of Delaware's Delaware Stadium, with the winning Blue Hens receiving the new traveling trophy, the First State Cup. Additionally, a three game series has been scheduled for September 2012, 2013, and 2014. All games in the series will be held at Delaware Stadium in Newark, because its seating capacity of 22,000 is much larger than that of Delaware State's Alumni Stadium. The schools had been engaged in talks to play a game as early as 2009, but Furman University, who had previously signed a contract to play a home and away series with UD, backed out of game two which was scheduled to be played at UD in order to play University of Missouri and garner a larger payday. This left the University of Delaware with an open date to fill with only a few months before the season started and the two sides quickly completed the deal.

On June 19, 2008, Keeler was granted a 10-year contract extension that will keep him on as head coach of the Blue Hens through the 2017 season. The Homecoming Game versus William & Mary on October 18, 2008 marked the first time in 18 years that the Fightin' Blue Hens did not score a touchdown in a home game. The final score of 27–3 also made Delaware's third straight loss scoring ten points or fewer for the first time since the end of the 1983 season.[6] Delaware's eighth loss, to Villanova in the final game of the season, ended a season that saw it lose eight games for the first time in 117 seasons. The Fightin' Blue Hens were one of only four teams in the NCAA to never lose eight games in a season, the others being Michigan (which lost its 8th game a week before the Hens), Tennessee, and Ohio State.