The Tribe of Dan, also sometimes spelled as "Dann", (Hebrew: דָּן, Modern Dan Tiberian Dān ; "Judge") was one of the Tribes of Israel. Though known mostly from biblical sources, they were possibly descendants of the Denyen Sea Peoples who joined with Hebrews. Eventually they were excluded from list of sealed tribes for pagan practices. 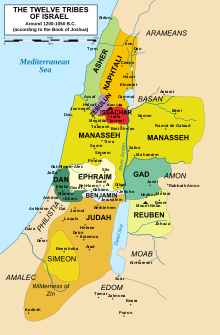 The territory of Judah appears in orange at the south on this map of the tribes.

According to the Torah, the tribe consisted of descendants of Dan, a son of Jacob and Bilhah, Rachel's maidservant (Genesis 30:4). In the Biblical account, Dan is one of the two children of Bilhah, Rachel's handmaid and one of Jacob's wives, the other child of Bilhah being Naphtali. Scholars see this as indicating that the authors saw Dan and Naphtali as being not of entirely Israelite origin (hence descendants of handmaids rather than of full wives).[1] Some have noted that the territory of the handmaid tribes happens to be the territory closest to the north and eastern borders of Canaan, thus exposing them to Assyria and Aram.[2] However, other tribes born to wives, including the firstborn Reuben, were also included on the eastern outskirts, and immediately adjacent to Israel's more traditional enemies at the time of their entry to Canaan, the Moabites and Ammonites (wars with Aram and Assyria did not begin until over 500 years after the entry to Canaan- I Kings 11:25, II Kings 15:19).

The tribe was the last to be receive its territorial inheritance.[3][4] According to the biblical narrative, the tribe had originally tried to settle in the central coastal area of Canaan, but due to enmity with the Philistines who had already settled there, were only able to camp in the hill country overlooking the Sorek Valley, the camp location becoming known as Mahaneh Dan ("Camps of Dan"). (Joshua 19) The region they were trying to settle included the area as far north as Joppa, and extending south into the Shephelah in the area of Timnah; as a result, the modern state of Israel refers to the region as Gush Dan (the Dan area). However, as a consequence of the pressure from the Philistines, the tribe abandoned hopes of settling near the central coast, instead migrating to the north of the country, and after conquering Laish, refounded it as their capital (renaming it Dan). (Judges 18)

The tribe was subjected to historical negativism and suppression by Deuteronomistic historicans.[5] According to the Hebrew Bible, following the completion of the conquest of Canaan by the Israelite tribes after about 1200 BCE,[6] Joshua allocated the land among the twelve tribes. Dan was allocated the most northerly region, to the north of the Galilee, and west of the Jordan, stretching north as far as Laish, Dan's main city (which became known as Dan). (Joshua 19:40-48)

In the Biblical census of the Book of Numbers, the tribe of Dan is portrayed as the second largest Israelite tribe (after Judah).[7] Some textual scholars regard the census as being from the Priestly Source, dating it to around the 7th century BC, and more likely to reflect the biases of its authors, though this still implies that Dan was one of the largest tribes at a point fresh to the memories of the 7th century BC.[8][9] In the Blessing of Moses, which some textual scholars regard as dating from only slightly earlier than the deuteronomist,[10] Dan is seemingly prophesied to leap from Bashan; scholars are uncertain why this should be since the tribe are not recorded as having ever been resident in the Bashan plain, which lies to the east of the Jordan.[11]

From after the conquest of the land by Joshua until the formation of the first Kingdom of Israel in c. 1050 BC, the Tribe of Dan was a part of a loose confederation of Israelite tribes. No central government existed, and in times of crisis the people were led by ad hoc leaders known as Judges. (see the Book of Judges) With the growth of the threat from Philistine incursions, the Israelite tribes decided to form a strong centralised monarchy to meet the challenge, and the Tribe of Dan joined the new kingdom with Saul as the first king. After the death of Saul, all the tribes other than Judah remained loyal to the House of Saul, but after the death of Ish-bosheth, Saul's son and successor to the throne of Israel, the Tribe of Dan joined the other northern Israelite tribes in making David, who was then the king of Judah, king of a re-united Kingdom of Israel. However, on the accession of Rehoboam, David's grandson, in c. 930 BC the northern tribes split from the House of David to reform a Kingdom of Israel as the Northern Kingdom.

The most celebrated Danite was Samson, whom some suggest is derived from Denyen tribal legends.[12] 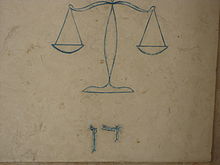 Scales of justice emblem of the tribe

The sapphire represented the tribe religiously on the ephod of the high priest,[14][15][16] situated between the Tribe of Judah's emerald[17] and the Tribe of Naphtali's diamond.[18]

The towers of Ailon, Selebi, and Emmaus Nicopolis were notable landmarks of the tribe.[19]

Their primary trade characteristic was seafaring, unusual for the Israeli tribes, and they engaged in fishing and commerce.[20][13] In the Song of Deborah the tribe is said to have stayed on their ships with their belongings.[21][22][23]

They were artisans and craftsmen,[24] the tribe including Hiram Abiff and Aholiab as descendants.[5][25][26]

They relied on stratagems and were warlike,[5][27] evident during their conquest of Laish recounted in the story of Micah's Idol.

Excavations have unearthed a large number of collared-rim jars, crucibles, pits, tuyeres, furnaces, and metal objects at Tel Dan dated from the 11th and 12th century BC, which have been ascribed to the tribe, indicating an industrial nature.[28][29]

As part of the Kingdom of Israel, the territory of Dan was conquered by the Assyrians, and exiled; the manner of their exile led to their further history being lost.

Ethiopian Jews, also known as Beta Israel, claim descent from the Tribe of Dan, whose members migrated south along with members of the Tribes of Gad, Asher, and Naphtali, into the Kingdom of Kush, now Ethiopia and Sudan,[30] during the destruction of the First Temple. This position is supported by former Sephardic Chief Rabbi Ovadia Yosef.[31] They are said to have fought with the natives.[32] Religious writers have tried to attach the serpent voodoo God Danbhala to this group, as the practice they suggest was a heterodox form of Ethiopian Judaism.[33]

According to the Book of Revelation (7:4-8), the tribe of Dan is the only original tribe of Israel which is not included in the list of tribes which are sealed. No mention is made of why they are excluded. It could be because of their pagan practices.[34] This made Hippolytus of Rome and a few Millennialists apparently claim that the Antichrist will come from the tribe of Dan.[35][36]

The tribes of Joseph and of Levi are mentioned in Revelation 7:5-8, while they were not commonly counted as tribes elsewhere. In most listings of the twelve tribes Levi is omitted, since the inheritance of Levi are the sacrifices of Israel and not an allotment of territory. Ordinarily Ephraim and the Tribe of Manasseh take the place of Joseph to keep the number of tribes at twelve once Levi is excluded. If Dan were excluded from Revelation 7:5-8 due to its being a seat of idolatry in the Northern Kingdom, perhaps the same reasoning might account for the exclusion of Ephraim since the other seat of idolatry in the Northern Kingdom was Bethel, situated in the territory of Ephraim. However, in Numbers 1:32, the tribe of Ephraim is clearly referenced as representing the "children of Joseph," thus, Ephraim appears to be a euphemism for Joseph, explaining Ephraim's apparent omission in Revelation chapter 7.