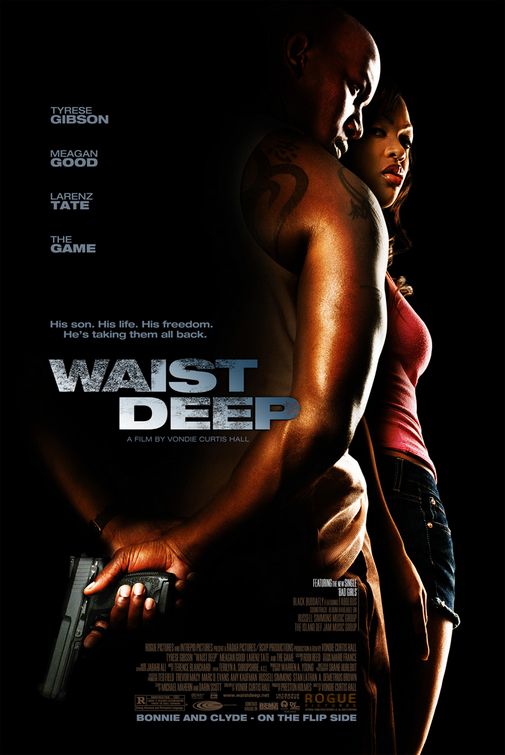 
and The Game
music =

"Waist Deep" is a 2006 - directed by , starring and . This is loosely based of the 1967 movie Bonnie and Clyde, including some similar subplots including the two main characters on the road, trying to avoid police, and committing bank robberies.

Ex-con Otis (), or "O2" as he was once known on account of his ability to vanish from a crime scene like oxygen, has done his time and is now determined to stay out of trouble and never leave his young son, Otis, Jr. (), ever again.

When O2 shows up late to pick Junior up from school one afternoon, he even pinky-swears that he'll always come back for Junior. That promise is put to the test just moments later when O2's cherry vintage Chevy convertible is stolen from him at gunpoint in the middle of a crowded Southland intersection -- with Junior in the back seat.

O2 chases the car and gets into a nasty gun battle with the carjackers -- circumstances that then make it impossible for O2 go to the police -- but to no avail.

O2 does, however, catch up with Coco (), a woman who sells stolen suits on the streets for a thug known as P Money (Julius Denem). O2 knows she's the one who marked him for the carjacking, and he forces her to help him get Junior back.

After a few hours on the street, Lucky comes back with some bad news: Junior has fallen into Meat's hands, and Meat is demanding that O2 deliver $100,000 by midnight the following night, or Junior will die.

Otis claims that that he's broke, but Meat thinks otherwise: Meat was once O2's partner in crime, and he thinks O2 is still holding onto the $100,000 they made off their last job together -- the job that got O2 sent up for six years.

Desperate to raise the cash, O2 comes up with a plan: He and Coco will rip off P Money's and Meat's own operations, staging it to look like the one is ripping off the other, and thereby triggering a gang war that will hopefully take them both down, and help O2 and Coco rescue Junior.

Differences from "Bonnie and Clyde"

*The main characters weren't killed by the police.
*The story didn't involve a child.
*Bonnie and Clyde was set in during the , "Waist Deep" was set in Los Angeles in the 2000s.