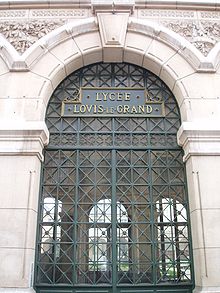 Front entrance of the Lycée Louis-le-Grand, in Paris, one of the most famous lycées providing preparatory classes for grandes écoles. 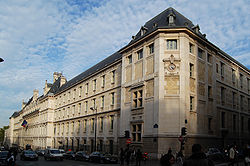 Exterior of the Lycée Louis-le-Grand, facing the rue St Jacques

The Lycée Louis-le-Grand (French pronunciation: [lise lwi lə ɡʁɑ̃]) is a public secondary school located in Paris, widely regarded as one of the most demanding in France. Formerly known as the Collège de Clermont, it was named in king Louis XIV of France's honor after he visited the school and offered his patronage.

It offers both a sixth-form college curriculum (as a lycée with 800 pupils), and a post-secondary-level curriculum (classes préparatoires with 900 students), preparing students for entrance to the elite Grandes Écoles. Students at the Lycée Louis-le-Grand are called magnoludoviciens.

Louis-le-Grand, founded in 1563, is located in the heart of the Quartier Latin, the traditional student's area of Paris. Rich in history, architecture, culture, this area is home to some of the oldest and most prestigious educational establishments in France including the Sorbonne and the Collège de France.

Louis-le-Grand plays an important role in the education of French elites. Many of its former pupils have become statesmen, diplomats, prelates, marshals of France, members of the Académie française, and men and women of letters. "The Jesuit College of Paris", wrote Élie de Beaumont in 1862, "has for a long time been a state nursery, the most fertile in great men". Indeed Molière, Voltaire, and Victor Hugo are former students who became famous writers, and Georges Pompidou, Valéry Giscard d'Estaing, and Jacques Chirac, all presidents of the French Fifth Republic, spent time on the benches of Louis-le-Grand. Renowned foreign students of the Lycée include King Nicholas I of Montenegro and Léopold Sédar Senghor, the first president of Senegal.

There are several courtyards at the school:

(These pages are in French)