Keld is a hamlet in the English county of North Yorkshire. It is situated on Swaledale, in the Yorkshire Dales. The name derives from the Viking word Kelda meaning a spring, and the village was once called Appletre Kelde - the spring near the apple trees.[1]

Keld is the crossing point of the Coast to Coast Walk and the Pennine Way long distance footpaths at the head of Swaledale. At the height of the lead-mining boom in Swaledale in the late 19th century, the village had a population of around 6,000. During this period, a series of remarkable buildings - now Grade II listed - were erected: these include the Congregational and Methodist chapels, the school and the Literary Institute.

Unfortunately Keld does not contain a shop. There was a Youth Hostel but this closed in October 2006; the building has since reopened as Keld Lodge, a hotel with bar and restaurant. There is a series of four waterfalls close to Keld at a limestone gorge on the River Swale. These are Kisdon Force, East Gill Force, Catrake Force and Wain Wath Force. 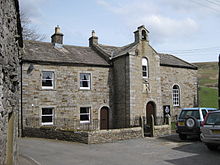 The Keld Resource Centre, a local charity linked to the faith sector,[2] is restoring a series of listed buildings in the village centre and returning them to community use. The first phase involved restoration of the Manse, the Minister's house attached to the United Reformed Church, which was completed in 2009 and is now in use as a holiday cottage, proceeds from which support the Centre's work.

In 2010, the Centre created the Keld Well-being Garden in the chapel churchyard. It provides a quiet spot for visitors to contemplate their well-being in the beautiful natural environment of Upper Swaledale.

The Centre's latest project is the Keld Countryside and Heritage Centre. Opened on 14 May 2011, the centre provides interpretation of the countryside, built and social history of Keld, and a small display of artefacts relevant to Upper Swaledale prepared by the Swaledale Museum in Reeth. It is open throughout the year.

The ruins of Crackpot Hall lie about a mile east of Keld on the northern slope of the dale at grid reference NY906008. There may have been a building on this site since the 16th century[3] when a hunting lodge was maintained for Thomas, the first Baron Wharton, who visited the Dale occasionally to shoot the red deer. Survey work by the Yorkshire Dales National Park Authority has shown that the building has changed many times over the years. At one time it even had a heather or "ling" thatched roof. 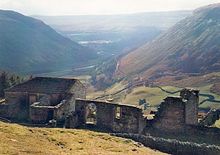 Crackpot Hall and view of Swaledale

The current ruin is of a farmhouse dating from the mid 18th century. It was an impressive two-storey building with a slate roof and matching "shippons" or cow sheds at each end for animals. The building may also have been used as mine offices, as intensive lead mining was carried out in the area, and there were violent disputes over mine boundaries in the 18th century.

In the 1930s Ella Pontefract and Marie Hartley wrote of a wild 4-year-old child living here by the name of Alice.[4]

The current building was abandoned in the 1950s because of subsidence. Crackpot Hall has been saved from further decay by Gunnerside Estate with the aid of grants from the Millennium Commission and European Union through the Yorkshire Dales Millennium Trust.

The name Crackpot is said to be Viking for "a deep hole or chasm that is a haunt of crows".