The Lahu (Chinese: 拉祜族; pinyin: Lāhùzú; own names: Ladhulsi or Kawzhawd; Vietnamese: La Hủ) are an ethnic group of Southeast Asia and China.

The Lahu population outside of Asia is extremely small. In the United States, the Lahu populace is most likely found in the states of Minnesota, California and North Carolina. 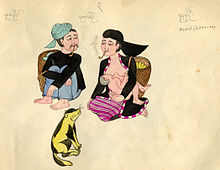 A Burmese depiction of the Lahu Na (Black Lahu)

The Lahu divide themselves into a number of subgroups, such as the Lahu Na (Black Lahu), Lahu Nyi (Red Lahu), Lahu Hpu (White Lahu), Lahu Shi (Yellow Lahu) and the Lahu Shehleh. Where a subgroup name refers to a color, it refers to the traditional color of their dress. These groups do not function as tribes or clans - there are no kin groups above that of the family. Lahu trace descent bilaterally, and typically practice matrilocal residence.

The Lahu language is part of the Loloish branch of the Lolo–Burmese subgroup of the Tibeto-Burman family (itself a member of the Sino-Tibetan language family). Like most of its relatives, it is a heavily isolating language with subject–object–verb word order, and a set of numeral classifiers. There are seven tones, and consonants cannot close syllables. The language spoken by the Lahu Shi is notably divergent from that spoken by the other groups. In Thailand, Lahu Na often serves as a lingua franca among the various hill tribes. Written Lahu uses the Latin alphabet. Among Christian villages, the language has been enriched by loanwords from English, Latin and Greek via Bible translation, plus neologisms in the areas of hygiene, music and education.[1]

An elderly Lahu woman at a refugee camp in Thailand.

The traditional Lahu religion is polytheistic. Buddhism was introduced in the late 17th century and became widespread. Many Lahu in China are Christians. Christianity became established in Burma in the 19th century and has been spreading since.

The Lahu of Northeastern Thailand had encounters with Theravada Buddhist forest monks (tudong monks) around the years 1930-1940. The leader of such a group of monks, ajahn Man (or Mun), spent some time in Lahu territory. These Lahu asked him for a "gatha that would protect them from ghosts and demons." ([2]) The word "gatha", song or verse, is most used in Mahayana Buddhism. Hence this episode shows that Mahayana Buddhist monks preceded the Theravada monks in this particular area.