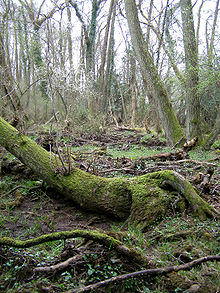 Matley Bog is an ancient woodland bog in the New Forest, Hampshire, England.

It is notable for the presence of the rare ant, Formica candida, sometimes called the shining bog ant, which was discovered there in the early 20th century by Horace Donisthorpe.the wetter areas contain the rare and diminutive bog orchid

The stream that runs axially through the bog drains at its eastern end into the infant Beaulieu River.