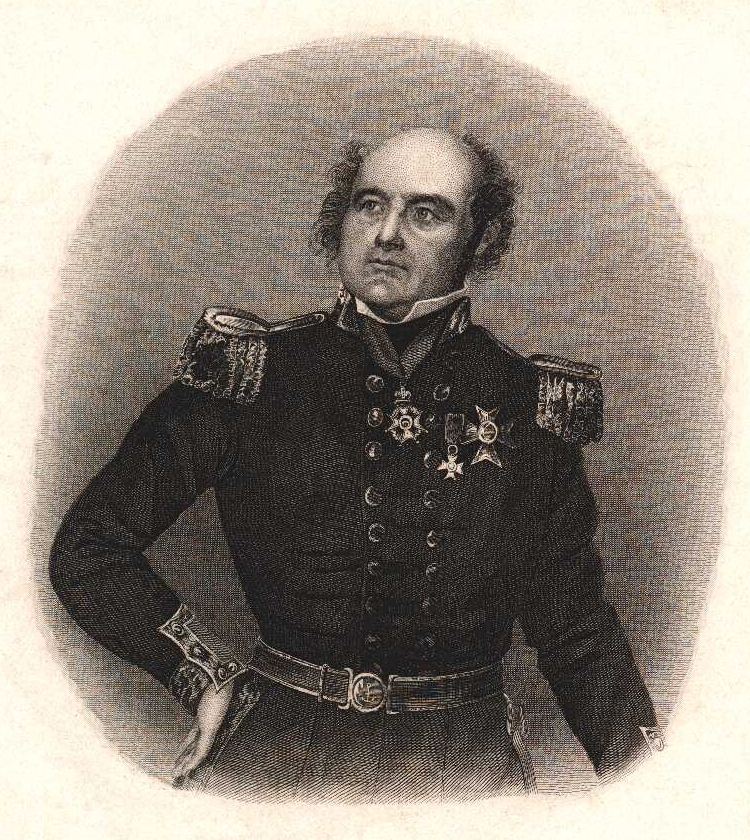 birth_date =birth date|1786|4|16|df=y
birth_place =Spilsby, ,
death_date =death date and age|1847|6|11|1786|4|16|df=y
death_place =near ,
spouse = & (nee Griffin)
order =5th Lieutenant Governor of Van Diemen's Land
term_start =,
term_end =,
successor =
predecessor =|Sir John Franklin, FRGS (, &ndash; , ) was a British officer and explorer who mapped almost two thirds of the northern coastline of . Franklin also served as governor of for several years. In his last expedition, he disappeared while attempting to chart and navigate a section of the in the . The entire crew perished from , , and before and after Franklin died and the expedition's icebound ships were abandoned in desperation.

Franklin was born in , , in 1786 and educated at . John Franklin was the ninth of 12 children. One of his sisters was the mother of . Franklin's father initially opposed his son's interest in a career at sea. However, Franklin was determined and his father reluctantly allowed him to go on a trial voyage with a . This hardened young Franklin's resolve, so at the age of 14 his father secured him a appointment on HMS "Polyphemus". Franklin was later present at a number of historic voyages and naval battles. These included the Battle of Copenhagen in 1801, an expedition to explore the coast of on HMS "Investigator" with his uncle, Captain , a return to the , serving aboard HMS "Bellerophon" at the in 1805, and he was at the .

John Franklin first travelled to the in 1818 because of a command from and became fascinated by it. He led a disastrous overland expedition into the of along the in 1819&ndash;22, losing 11 of the 20 men in his party. Most died of , but there was also at least one and suggestions of . The survivors were forced to eat and even attempted to eat their own leather boots. This gained Franklin the nickname of "the man who ate his boots" in America.

In 1823, after returning to England, Franklin married the . Their daughter, Eleanor Isabella, was born the following year. Eleanor (senior) died of in 1825, shortly after persuading her husband not to let her ill-health prevent him from setting off on another expedition to the . This expedition, a trip down the to explore the shores of the , was better supplied and more successful than his last.

In 1828, he was by George IV and in the same year married Jane Griffin, a friend of his first wife and a seasoned traveler who proved indomitable in the course of their life together.

Franklin was appointed Lieutenant-Governor of Van Diemen's Land in 1836, but was removed from office in 1843. He did not endear himself with the local s, who particularly disliked his ideals and his attempts to reform the Tasmanian . His wife, Lady Jane, was quite liberated for a woman of her day, known for "roughing it" to the extent that an expedition had to be mounted after she and Franklin became lost in the wild. Such exploits further distanced the couple from "proper" society, and may have contributed to Franklin's recall. Nevertheless, he was popular among the people of Tasmania. He is remembered by a significant landmark in the centre of &mdash;a statue of him dominates the park known as Franklin Square, which was the site of the original Government House. His wife worked to set up a , a and s. The village of Franklin, on the , is named in his honour, as is the on the West Coast of Tasmania, one of the better known Tasmanian rivers due to the controversy.

thumb|right|Map of the probable routes taken by "Erebus" and "Terror" during Franklin's lost expedition.">legend|blue|Disko Bay (5) to Beechey Island, in 1845.legend|purple|Around Cornwallis Island (1), in 1845.legend|red|Beechey Island down Peel Sound between Prince of Wales Island (2) and Somerset Island (3) and the Boothia Peninsula (4) to near King William Island in 1846.Disko Bay (5) is about 3,200 kilometres (2,000 mi) from the mouth of the Mackenzie River (6).

Exploration of the Arctic coastal mainland after Franklin's second Arctic expedition had left less than convert|500|km|mi|0 of unexplored Arctic coastline. The British decided to send a well-equipped Arctic expedition to complete the charting of the Northwest Passage. After declined an offer to command the expedition, an invitation was extended to Franklin, who accepted despite his age, 59. A younger man, Captain James Fitzjames, was given command of HMS "Erebus" and Franklin was named the expedition commander. Captain Francis Rawdon Moira Crozier, who had commanded HMS "Terror" during the Ross 1841&ndash;44 Antarctic expedition, was appointed executive officer and commander of HMS "Terror". Franklin was given command on , , and received official instructions on , . [cite journal | last = Gibson, F.R.G.S.| first = William
title = Sir John Franklin's Last Voyage: A brief history of the Franklin expedition and the outline of the researches which established the facts of its tragic outcome | journal = The Beaver | pages = 48 | date = ]

HMS "Erebus" at convert|370|LT|MT|lk=on and HMS "Terror" at convert|340|LT|MT were sturdily built and were outfitted with recent inventions. These included s from the that enabled the ships to make convert|4|kn|km/h|lk=on on their own power, a unique combined steam-based heating and distillation system for the comfort of the crew and to provide large quantities of fresh water for the engine's boilers, a mechanism that enabled the iron and to be drawn into iron wells to protect them from damage, ships' libraries of more than 1,000 books, and three years' worth of conventionally preserved or tinned preserved food supplies. Unfortunately, the latter was supplied from a cut-rate provisioner who was awarded the contract only a few months before the ships were to sail. Though his "patent process" was sound, the haste with which he had prepared thousands of cans of food led to sloppily-applied beads of solder on the cans' interior edges and allowed lead to leach into the food. Chosen by the Admiralty, most of the crew were Englishmen, many from the with a small number of Irishmen and Scotsmen.

The Franklin Expedition set sail from , England, on the morning of , , with a crew of 24 officers and 110 men. The ships traveled north to for supplies. From Scotland, the ships sailed to with HMS "Rattler" and a transport ship, "Barretto Junior". After misjudging the location of Whitefish Bay, , , the expedition backtracked and finally harboured in that far north outpost to prepare for the rest of their voyage. Five crew members were discharged and sent home on the "Rattler" and "Barretto Junior", reducing the ships' final crew size to 129. The expedition was last seen by Europeans on , , when Captain Dannett of the "Prince of Wales" encountered "Terror" and "Erebus" moored to an in .

After two years and no word from the expedition, Franklin's wife urged the Admiralty to send a search party. Because the crew carried supplies for three years, the Admiralty waited another year before launching a search and offering a £20,000 reward for finding the expedition. The money and Franklin's fame led to many searches. At one point, ten British and two American ships, USS "Advance" and USS "Rescue", headed for the Arctic. Eventually, more ships and men were lost looking for Franklin than in the expedition itself. Ballads such as "", commemorating Lady Franklin's search for her lost husband, became popular. [cite book | last = M'Clintock | first = Francis L. | title = The Voyage of the 'Fox' in the Arctic Seas. A Narrative of the Discovery of the Fate of Sir John Franklin and His Companions | publisher = Boston: Ticknor and Fields | date = 1860 | pages = 336] In the summer of 1850, expeditions including three from England as well as one from the joined in the search. They converged off the east coast of , where the first relics of the Franklin expedition were found, including the gravesites of three Franklin Expedition crewmen.

For years after the loss of the Franklin party, the media portrayed Franklin as a who led his men in the quest for the Northwest Passage. A statue of Franklin in his home town bears the inscription "Sir John Franklin — Discoverer of the North West Passage". Statues of Franklin outside the Athenaeum in and in bear similar inscriptions. Although the expedition's fate, including the possibility of cannibalism, was widely reported and debated, Franklin's standing with the public was not diminished. The mystery surrounding Franklin's last expedition was the subject of a 2006 episode of the "" television series "" and a 2007 documentary on . The expedition has inspired many artistic works including a famous ballad, , a verse play by Canadian poet , a children's book, a short story and essays by Canadian author , and several novels, and is referenced in Canadian musician ' ballad "Northwest Passage". There is also a direct reference to John Franklin's ill-fated expedition in the Irish-American group 's album , specifically in a track titled "The Erebus and the Terror". Additionally in 2007, a fictional account of the expedition was authored by Dan Simmons titled "The Terror", ISBN 978-0-316-01744-2.

* [http://www.pbs.org/wgbh/nova/arctic/ NOVA's companion website for ]
* [http://www.biographi.ca/009004-119.01-e.php?&id_nbr=3394 Biography at the "Dictionary of Canadian Biography Online"]
* [http://www.ric.edu/rpotter/SJFranklin.html The Fate of Franklin (Russell Potter)]
* [http://ink.news.com.au/mercury/franklin/history.htm The Life and Times of Sir John Franklin]
* [http://www.nmm.ac.uk/server/show/conWebDoc.600/viewPage/1 List] of artifacts recovered from the Franklin Expedition
* [http://pubs.aina.ucalgary.ca/arctic/Arctic50-1-36.pdf Paper] from the Universary of Calgary about the discovery of skeletal remains in 1992
*
* [http://www.thestar.com/News/Canada/article/478150 Ottawa plans search for Franklin ships] , "", 14 August 2008.