Uzbekistan's armed forces form the state organisation charged with the defence of Uzbekistan. They are reported to be the largest in Central Asia.[2] According to the 1992 Law on Defence, Uzbekistan's military is for defensive purposes only.[citation needed]

Uzbekistan and Russia signed a mutual defence pact in 2005, what will also result in closer military cooperation. This marked a stark contrast to a few years earlier, when the US appeared to be Uzbekistan's favoured foreign friend, and relations with Russia were cooler.[4]

'The country [has] also began professionalizing its military, an effort that has only limited success and erratic government support. But even in Uzbekistan, these changes represent merely a modest beginning and most of the benefits are concentrated in a few elite, higher readiness formations rather than uniformly applied to the entire force. The Uzbek military is woefully inadequate, but it is far superior to its neighbours.'[5]

The government maintains a command and staff college for the military in Tashkent, based on the former Soviet TVOKU higher command college.

After the September 11, 2001 attacks, the United States leased the Karshi-Khanabad airbase in southern Uzbekistan, which borders Afghanistan. The American base there was called "Camp Stronghold Freedom," yet was more often referred to as "K2 Airbase" by the personnel in theater.

In May 2005, the military was involved in suppressing unrest in the Ferghana Valley city of Andijan, which became known as the Andijan massacre. Consequently, the EU banned arms sales and imposed a one-year visa ban on 12 senior officials, including the security chief and interior and defence ministers, accusing them of bearing responsibility for the killings.[6]

In the aftermath of the incident, President Karimov dismissed several senior military figures: Defense Minister Kadyr Gulyamov, Head of the Joint Headquarters of the Armed Forces Ismail Ergashev, and Commander of the Eastern military district Kosimali Akhmedov. Burnashev and Chernykh said that '..although these dismissals did not change the formal system of administration in the security and military structures, they reflected serious shifts in power relations among regional elites representing their clans.'[7]

A joint statement of the member countries of the Shanghai Co-operation Organisation issued in early July, 2005 on a conference in Astana (Kazakstan) called for a withdrawal of US troops from military bases in Central Asia. On July 29, 2005, Uzbekistan invoked a provision asking the U.S. to leave within 180 days. On November 21, 2005, the withdrawal of US troops from Karshi-Khanabad and any other bases was completed.[8]

The European Union lifted the arms sales ban in 2009.

The government has accepted the arms control obligations of the former Soviet Union, and acceded to the Nuclear Non-Proliferation Treaty as a non-nuclear state. It has also supported an active program by the U.S. Department of Defense Defense Threat Reduction Agency in western Uzbekistan (Nukus and the biological warfare test laboratory on Vozrozhdeniye Island).

There are four motor rifle brigades whose designations are not known,[11] and the 17th Air Assault Brigade at Fergana, the former Soviet Airborne Forces' 387th Airborne Training Regiment. Motorized brigades are located around Bukhara, Samarqand, Termez, Nukus, and Andijan.[12] 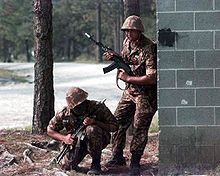 In September 2004, the (then) Royal Welsh Regiment (now 3rd Bn The Royal Welsh) of the British Army participated with the Uzbek Army Peacekeeping Battalion in "Exercise Timurlane Express" in the Farish Mountain Training Area.[citation needed] This was a 3-week NATO sponsored Partnership for Peace training exercise. 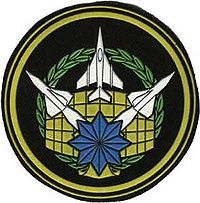 The Uzbek air forces consist of units formerly part of the 49th Air Army of the Turkestan Military District headquartered at Tashkent. There are two remaining combat units, brigades at Karshi-Khanabad and Dzhizak.[11]