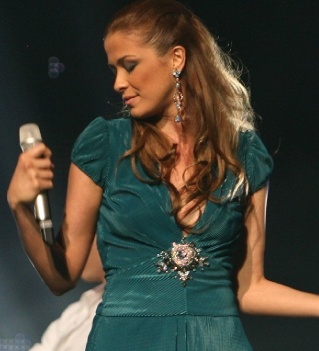 Karolina Gočeva ( _mk. Каролина Гочева, audio-IPA|Mk-Karolina Gocheva.ogg| [karɔˈlina ˈgɔtʃɛva] ) (born , , in , , present-day ) is a Macedonian . She represented the FYR of Macedonia [ [http://www.ebu.ch/en/ebu_members/actives/index.php Participating member] of as Former Yugoslav Republic of Macedonia.] [ Commonly abbreviated in [http://www.eurovision.tv/event/artistdetail?song=24511&event=1470 Eurovision.tv] as F.Y.R of Macedonia.] in the 2002 and 2007 s , ranking 19th and 14th, respectively. She became the first Macedonian artist to represent Republic of Macedonia twice at Eurovision.

Karolina Gočeva got her first break at the age of 10 when she performed at the children's festival "" in and the annual festival "Makfest 91" in with the song "Mamo, pušti me" ("Mum, let me go"). Her career was just starting, so she used the national festivals to promote her voice and talent. She became a regular participant in SkopjeFest, debuting in 1994 with a performance of the song "Koj da ti kaže" ("Who to tell you"). In the following years she participated successfully, especially at SkopjeFest where a song is chosen for . In 1996, Karolina participated with "Ma, ajde kaži mi" ("Come on, tell me") and reached 9th place. In 1998, she participated with "Ukradeni noќi" ("Stolen nights") and was more successful, reaching 4th place with 10,454 televotes. In 2000, Karolina joined the record label Avalon Productions, on which her debut album "Jas imam pesna" (I've got a song) was released. Karolina released several singles off her first album, including "Sakaj me" ("Love me"), "Bez ogled na se"("No matter what") and "Nemir" ("Restless"), the latter of which she sang in a duet with . With her first album released, Karolina took part in the SkopjeFest Eurovision song selection. Karolina nearly won, but missed out coming in 2nd place with the song "Za nas" ("For us") from , which managed to receive 916 points.

After promotion through concerts and festivals, Karolina released her second album "Zošto sonot ima kraj" (Why the dream has an end) in 2002. Karolina gained more popularity in the former , by performing at the Sunčane Skale festival with the song "Kazi mi" ("Tell me"). Karolina released "Ti mozes" ("You could") and "Ke bide se vo red" ("Everything will be okay") as singles in Macedonia. On Karolina's album, she included three English versions of her songs titled "I'm looking for Jamaica", "You could", and "Tell me". 2002 became even more successful for Karolina because she was crowned the winner of "SkopjeFest 2002 with "" ("It Depends on Us"), which allowed her to represent Macedonia in front of a European audience. Some controversy surrounded Karolina's participation and it dealt with the language of the song. MKTV submitted the participation form with the performing language selected as Macedonian. Karolina and her record label thought that this would be a handicap and that Karolina should sing in English so she could successfully compete with the other nations. MKTV dragged out the incident, threatening to send 2nd placed performer if Karolina did not sing in Macedonian. At last MKTV offered Karolina the possibility of performing the song in Macedonian and English, but she eventually declined. The deadline for changes passed and Karolina ended up going to , with the Macedonian version of her song. At the , she ended up in 19th place. During 2002 she held numerous concerts in Macedonia, including three in the "Univerzalna sala" in .

On March 2003 she released her third album "Znaeš kolku vredam" (You know what I'm worth). Also she held many concerts during the "Ilinden" celebrations, such as a concert in on the stage of "Dolni Saraj" with her special guest star . Karolina released music videos for her songs "Hipokrit" ("Hypocrite"), "Ljubov pod oblacite" ("Love under the clouds"), and "Srescemo se opet" ("We will meet again"). She was featured on many television programs on Macedonian TV Stations. After 2003, her career expanded to include , , , and , where her CDs are now also released. Karolina went into the studios and recorded all of her songs from her third album in the so she could appeal to a wider market in those areas. Her first Serbian language album was titled "Kad zvezde nam se sklope...kao nekada" (When the stars align...like once before).

In 2005, Karolina participated once again at in the Sunčane Skale festival. Her song "Ruza Ruzica" ("Red Rose") became an instant hit placing her 4th in the festival. Karolina also released her new song "Se lazam sebe" ("I'm lying to myself"), which was written by the diva of Macedonian pop music, . At the end of 2005, she released the album "Vo zaborav" (In Oblivion). However the promotion of the album started with a scandal when the Czech based "Imperial Video Production" accused Karolina of unprofessionalism during the shooting of the "Plovime" video. Karolina had arrived in Prague in late 2005 to shoot two music videos but left soon after the shooting of the first video. The production company had taken Karolina to court and had sued for 100,000 Euros in damages. Karolina continued with her career releasing the Serbian version of her album called "U Zaboravu" and a special Croatian version, which contained songs sung in the Jekavski dialect. Karolina's music videos have been rotating on . Shortly before going on summer break, Karolina released the song "Umiram bez tebe" ("Dying without you"). Karolina recorded a successful duet with Aki Rahimovski titled "Bela Pesna" ("White Song"), which became a big hit in the Ex-Yugoslavian region. In early 2007, Karolina released a duet with the popular Serbian group called "Ti i ja".On 15.December 2007. Karolina participated on "Radijski Festival" with the song "Kad te nema", and finished on 2nd place. She won the award for the best composition.

Karolina Gočeva represented the at the with the song "" ( _en. It Depends On Us). Her performance was praised by journalists and photographers due to her beauty. She was also nominated for Miss Eurovision 2002. She finished in 19th place though her popularity continued to grow on the .

Karolina Gočeva participated in, and won, the Skopje Fest competition with the song "", a song written by and composed by . The competition took place on , at the Universal Hall in Skopje. Karolina obtained a total of 144 points with a maximum of twelve points from every voting district, procuring her a landslide victory. Karolina became the first artist to represent Macedonia twice at . She competed in the semi-final in , on , performing at number 18. She qualified for the final and performed in the 6th slot on , , where she placed 14th in a field of 24 contestants with a score of 73 points.