Note that a "stationary process" is not the same thing as a "process with a stationary distribution". Indeed there are further possibilities for confusion with the use of "stationary" in the context of stochastic processes; for example a "time-homogeneous" Markov chain (which condition is sometimes called by the name "stationary Markov chain") is sometimes said to have "stationary transition probabilities".

be a stochastic process and let

is said to be stationary if, for all k, for all τ, and for all

Since τ does not affect FX(.), FX is not a function of time. 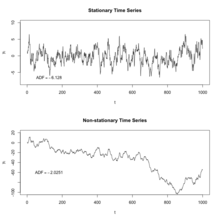 Two simulated time series processes, one stationary the other non-stationary. The Augmented Dickey–Fuller test is reported for each process and non-stationarity cannot be rejected for the second process.

As an example, white noise is stationary. The sound of a cymbal clashing, if hit only once, is not stationary because the acoustic power of the clash (and hence its variance) diminishes with time. However, it would be possible to invent a stochastic process describing when the cymbal is hit, such that the overall response would form a stationary process.

An example of a discrete-time stationary process where the sample space is also discrete (so that the random variable may take one of N possible values) is a Bernoulli scheme. Other examples of a discrete-time stationary process with continuous sample space include some autoregressive and moving average processes which are both subsets of the autoregressive moving average model. Models with a non-trivial autoregressive component may be either stationary or non-stationary, depending on the parameter values, and important non-stationary special cases are where unit roots exist in the model.

Let Y be any scalar random variable, and define a time-series { Xt }, by

Then { Xt } is a stationary time series, for which realisations consist of a series of constant values, with a different constant value for each realisation. A law of large numbers does not apply on this case, as the limiting value of an average from a single realisation takes the random value determined by Y, rather than taking the expected value of Y.

As a further example of a stationary process for which any single realisation has an apparently noise-free structure, let Y have a uniform distribution on (0,2π] and define the time series { Xt } by

Then { Xt } is strictly stationary.

So, a continuous-time random process x(t) which is WSS has the following restrictions on its mean function

the notation is often abbreviated and written as:

This also implies that the autocovariance depends only on τ = t1 − t2, since

When processing WSS random signals with linear, time-invariant (LTI) filters, it is helpful to think of the correlation function as a linear operator. Since it is a circulant operator (depends only on the difference between the two arguments), its eigenfunctions are the Fourier complex exponentials. Additionally, since the eigenfunctions of LTI operators are also complex exponentials, LTI processing of WSS random signals is highly tractable—all computations can be performed in the frequency domain. Thus, the WSS assumption is widely employed in signal processing algorithms.

The terminology used for types of stationarity other than strict stationarity can be rather mixed. Some examples follow.