He came to prominence in the early '70s as a member of the New York Dolls. He later played with The Heartbreakers and as a solo artist.

John Genzale was born in Queens, NY, where he first lived in East Elmhurst and then Jackson Heights.[1] As a boy he played baseball but could not join the Little League, as league rules required the presence of a player's father. He also refused to cut his hair short.

His first musical performance in the winter of 1967 was with The Reign, and after that, with "Johnny and the Jaywalkers," under the name Johnny Volume while a student at Quintano's School for Young Professionals[2].

In 1968 he started going to the Fillmore East on weekends with his girlfriend, Janice. In late 1969, he got a job as a sales clerk at D'Nazz leather shop, on Bleecker Street in the West Village. In the summer of 1970, he went to England for the Isle of Wight Festival. In London he hung out at the Speakeasy Club and bought new clothes on Carnaby Street. Toward the end of 1970 he started hanging out at Nobodys' Club on Bleecker Street, in the West Village. It was near there that he met future Dolls, Arthur Kane and Rick Rivets. He joined their band, "Actress", which became the New York Dolls with David Johansen, Sylvain Sylvain and Billy Murcia. At this time John Genzale renamed himself Johnny Thunders, after the DC comic book hero.

John and the Dolls were signed to Mercury Records due to the enthusiasm of A and R man, Paul Nelson. John recorded two albums with the band, New York Dolls and Too Much Too Soon. They were managed by Marty Thau. Subsequently they worked with Malcolm McLaren for several months, and were an inspiration for the Sex Pistols.

In 1975 Thunders and Nolan left the band, though Johansen and Sylvain continued playing as the New York Dolls until 1977. Their early recordings are still in print and continue to influence young musicians. 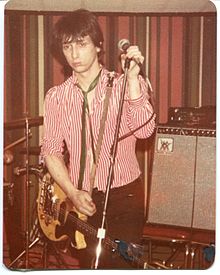 Johnny Thunders, performing at the VFW Post in Ann Arbor, Michigan in July 1979. At that time he was collaborating with Wayne Kramer of the MC5, as 'Gang War'.

With Thunders leading the band, the Heartbreakers toured America before coming to Britain to join the Sex Pistols, Clash and the Damned on the now legendary Anarchy Tour. The group stayed in the UK throughout 1977, where their popularity was significantly greater than in the U.S., particularly among punk bands. While in Britain they signed to Track Records and released their only official studio album LAMF. Since remixed and now regarded as one of the great punk albums, at the time critics generally favourable to the band expressed disappointment with its 'muddy sound'. Displeased with the production the band themselves were soon at loggerheads with each other culminating in drummer Jerry Nolan quitting in November 1977. Shortly after, the Heartbreakers were officially over as a unit.

Thunders stayed in London and recorded the first in a number of solo albums beginning with So Alone in 1978. The notoriously drug-fuelled recording sessions featured a core band of Thunders, bassist Phil Lynott, drummer Paul Cook, and guitarist Steve Jones, with guest appearances from Chrissie Hynde, Steve Marriott, Walter Lure, Billy Rath, and Peter Perrett of The Only Ones. The CD version of the album contains four bonus tracks, including the single "Dead or Alive". After its release, Thunders and Sex Pistols bassist Sid Vicious played in the Living Dead for a short time before moving back to the US and joining Heartbreaker buddies Walter Lure, Billy Rath and sometimes Jerry Nolan for gigs at Max's Kansas City.

In late 1979 Thunders moved to Detroit with his wife Julie and began performing in a band called Gang War. Other members included John Morgan, Ron Cooke, Philippe Marcade and former MC5 guitarist Wayne Kramer. They recorded several demos and performed live several times before disbanding, with Zodiac Records releasing an EP in 1987. Bootlegs of their demos and live performances are circulating; One semi-official live/studio vinyl only LP was released on Zodiac in 1990, credited to Thunders and Kramer and titled Gang War.

During the early 1980s, Thunders re-formed The Heartbreakers for various tours; the group recorded their final album- Live at the Lyceum in 1984.

In 1985, he released Que Sera Sera, a collection of new songs that showed he could still perform convincingly. Three years later he teamed up with ex-Snatch vocalist Patti Palladin and former Only Ones guitarist John Perry to record 'Copy Cats', a covers album inspired by John Lennon's Rock N Roll .

From August 1988, until his death in April 1991, Thunders performed with a band known as the Oddballs: Jamie Heath, saxophone; Alison Gordy, vocals; Chris Musto, drums; Stevie Klasson, guitar; and Jill Wisoff, bass, who left after a year.

His final recording was a version of "Born Too Lose", with German punk rock band Die Toten Hosen, recorded 36 hours before his death in New Orleans.

Many rumors surround Thunders' death at the St. Peter House in New Orleans, Louisiana in April 1991. He apparently died of drug-related causes, but it has been speculated that it was the result of foul play. According to the autobiography Lobotomy: Surviving The Ramones, Dee Dee Ramone took a call in New York the next day from Stevie Klasson, Johnny's rhythm guitar player. "They told me that Johnny had gotten mixed up with some bastards... who ripped him off for his methadone supply. They had given him LSD and then murdered him. He had gotten a pretty large supply of methadone in England, so he could travel and stay away from those creeps - the drug dealers, Thunders imitators, and losers like that."[3]

What is known for certain is that Johnny's room (no. 37) was ransacked and most of his possessions were missing (passport, makeup, clothes). Rigor mortis had set in with his body positioned in an unnatural state, described by eyewitnesses as "like a pretzel", underneath a coffee table. Friends and acquaintances acknowledge he had not been using heroin for some time, relying on his methadone prescriptions. The police did not open a criminal investigation.

Singer Willy DeVille, who lived next door to the hotel in which Thunders died, described his death this way:

I don't know how the word got out that I lived next door, but all of a sudden the phone started ringing and ringing. Rolling Stone was calling, the Village Voice called, his family called, and then his guitar player called. I felt bad for all of them. It was a tragic end, and I mean, he went out in a blaze of glory, ha ha ha, so I thought I might as well make it look real good, you know, out of respect, so I just told everybody that when Johnny died he was laying down on the floor with his guitar in his hands. I made that up. When he came out of the St. Peter's Guest House, rigor mortis had set in to such an extent that his body was in a U shape. When you're laying on the floor in a fetal position, doubled over - well, when the body bag came out, it was in a U. It was pretty awful."[4]

An autopsy was conducted by the New Orleans coroner, but served only to compound the mysteries. According to Thunders' biographer Nina Antonia as posted on the Jungle Records web site, the level of drugs found in his system was not fatal.[5] And according to the book "Rock Bottom: Dark Moments in Music Babylon" by Pamela Des Barres who interviewed Thunders' sister Marion, the autopsy confirmed evidence of advanced leukemia, which would explain the decline in Thunders' appearance in the final year of his life.[6] This also sheds light on the interview in Lech Kowalski's documentary "Born To Lose: The Last Rock and Roll Movie", where Thunders' sister Mary-Ann's husband says, "Only Johnny knew how sick he really was."

In a 1994 Melody Maker interview Thunders' manager Mick Webster described the efforts of his family, "We keep asking the New Orleans police to re-investigate, but they haven’t been particularly friendly. They seemed to think that this was just another junkie who had wandered into town and died. They simply weren’t interested."[7] Marion claims that the original police report is largely missing and Webster further explains that the Coroner who conducted the autopsy was fired for falsifying a report in another case.

Thunders was survived by his ex-wife Julie and four children:sons John, Vito, and Dino; and daughter Jamie Genzale.[8]

Thunders has had numerous bands paying tribute or mentioning him in their songs, while he was alive and after his death.