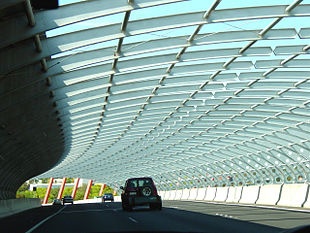 The sound tube in Melbourne, Australia, designed to reduce roadway noise without detracting from the area's aesthetics.

A noise barrier (also called a soundwall, sound berm, sound barrier, or acoustical barrier) is an exterior structure designed to protect sensitive land uses from noise pollution. Noise barriers are the most effective method of mitigating roadway, railway, and industrial noise sources – other than cessation of the source activity or use of source controls.

In the case of surface transportation noise, other methods of reducing the source noise intensity include encouraging the use of hybrid and electric vehicles, improving automobile aerodynamics and tire design, and choosing low-noise paving material. Extensive use of noise barriers began in the United States after noise regulations were introduced in the early 1970s.

Noise barriers have been built in the United States since the mid-20th century, when vehicular traffic burgeoned. In the late 1960s, acoustical science technology emerged to mathematically evaluate the efficacy of a noise barrier design adjacent to a specific roadway. By the 1991s, noise barriers that included use of transparent materials were being designed in Denmark and other western European countries.[1]Below, a researcher collects data to calibrate a roadway noise model for Foothill Expressway.

The best of these early computer models considered the effects of roadway geometry, topography, vehicle volumes, vehicle speeds, truck mix, roadway surface type, and micro-meteorology. Several U.S. research groups developed variations of the computer modeling techniques: Caltrans Headquarters in Sacramento, California; the ESL Inc. group in Palo Alto, California; the Bolt, Beranek and Newman[2] group in Cambridge, Massachusetts, and a research team at the University of Florida. Possibly the earliest published work that scientifically designed a specific noise barrier was the study for the Foothill Expressway in Los Altos, California.[3]

Numerous case studies across the U.S. soon addressed dozens of different existing and planned highways. Most were commissioned by state highway departments and conducted by one of the four research groups mentioned above. The U.S. National Environmental Policy Act[4] effectively mandated the quantitative analysis of noise pollution from every Federal-Aid Highway Act Project in the country, propelling noise barrier model development and application. With passage of the Noise Control Act of 1972,[5] demand for noise barrier design soared from a host of noise regulation spinoff.

By the late 1970s, over a dozen research groups in the U.S. were applying similar computer modeling technology and addressing at least 200 different locations for noise barriers each year. In 1973 Sound Fighter® Systems (SFS), a company based out of Shreveport, LA, started designing, engineering and manufacturing high-performance absorptive sound walls. Sound Fighter® Systems is the oldest established manufacturer of absorptive outdoor noise barriers in America.[6] As of 2006, this technology is considered a standard in the evaluation of noise pollution from highways. The nature and accuracy of the computer models used is nearly identical to the original 1970s versions of the technology.

The acoustical science of noise barrier design is based upon treating a roadway or railway as a line source. The theory is based upon blockage of sound ray travel toward a particular receptor; however, diffraction of sound must be addressed. Sound waves bend (downward) when they pass an edge, such as the apex of a noise barrier. Further complicating matters is the phenomenon of refraction, the bending of sound rays in the presence of an inhomogeneous atmosphere. Wind shear and thermocline produce such inhomogeneities.

The sound sources modeled must include engine noise, tire noise, and aerodynamic noise, all of which vary by vehicle type and speed. The resulting computer model is based upon dozens of physics equations translated into thousands of lines of computer code. Software applications are available which are able to model these situations and assist in the design of such noise barriers.

Some noise barriers consist of a masonry wall or earthwork, or a combination thereof (such as a wall atop an earth berm). Sound abatement walls are commonly constructed using steel, concrete, masonry, wood, plastics, insulating wool, or composites. In the most extreme cases, the entire roadway is surrounded by a noise abatement structure, or dug into a tunnel using the cut-and-cover method. The noise barrier may be constructed on private land, on a public right-of-way, or on other public land. Because sound levels are measured using a logarithmic scale, a reduction of nine decibels is equivalent to elimination of about 80 percent of the unwanted sound.

Noise barriers can be extremely effective tools for noise pollution abatement, but theory calculates that certain locations and topographies are not suitable for use of any reasonable noise barrier. Cost and aesthetics play a role in the final choice of any noise barrier. 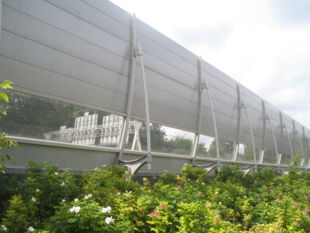 This noise abatement wall in The Netherlands has a transparent section at the driver's eye-level to reduce the visual impact.

Disadvantages of noise barriers include:

With regard to construction costs, a major factor is the availability of excess soil in the immediate area which could be used for berm construction. If the soil is present, it is often cheaper to construct an earth berm noise barrier than to haul away the excess dirt, provided there is sufficient land area available for berm construction. Generally a four-to-one ratio of berm cross sectional width to height is required. Thus, for example, to build a 6-foot-high (1.8 m) berm, one needs an available width of 24 feet (7.3 m).

Earth berm noise barriers can be constructed solely of excess earth from grading pads for a residential development it will protect. Thus its entire construction cost is negligible; arguably, it may pay into the project, since offhaul of earth may have been needed. A further nuance of this particular project is that the residential side of the berm is over-excavated, which gives more privacy between highway and homes and also enhances noise benefit. Finally, note the aesthetics of the earth berm which blends with scenic elements of the natural hills of Annadel State Park in the background. It may be a surprise to find out this berm is over six feet in height, since the aesthetics of earth mounding reduce the visual impact of the structure, compared to a soundwall.

As a minor embellishment to noise barrier design, one may note the concept of constructing a louver or cap atop the wall that is directed back toward the noise source. This concept follows the theory that such a design should inhibit shadow zone diffraction filling in sound behind the noise barrier. In actual experience the benefits are slight compared to the benefits of a higher barrier and the costly construction techniques necessary to create and maintain such a device. Variation of the louver design can be found in Denmark, where the designs are also intended to minimize reflected sound. Furthermore, some of the Danish soundwalls are made of transparent materials to minimize the visual impact; such material use, however, compromises the efficacy by reducing mass.[citation needed]