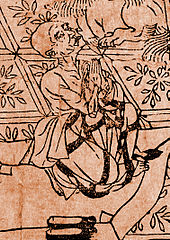 The Diamond Sūtra (Sanskrit: Vajracchedikā Prajñāpāramitā Sūtra), is a short and well-known Mahāyāna sūtra from the Prajñāpāramitā, or "Perfection of Wisdom" genre, and emphasizes the practice of non-abiding and non-attachment. Note that the title properly translated is the Diamond Cutter of Perfect Wisdom although it is popular to refer to it as the Diamond Sūtra.

A copy of the Chinese version of Diamond Sūtra, found among the Dunhuang manuscripts in the early 20th century and dated back to 868, is, in the words of the British Library, "the earliest complete survival of a dated printed book."[1]

The earliest known Sanskrit title for the sūtra is the Vajracchedikā Prajñāpāramitā Sūtra. In English, shortened forms such as Diamond Sūtra and Vajra Sūtra are common. The Diamond Sūtra has also been highly regarded in a number of Asian countries where Mahāyāna Buddhism has been traditionally practiced. Translations of this title into the languages of some of these countries include:

The first translation of the Diamond Sūtra into Chinese is thought to have been made in 401 CE by the venerated and prolific translator Kumārajīva.[4] Kumārajīva's translation style is distinctive, possessing a flowing smoothness that reflects his prioritization on conveying the meaning as opposed to precise literal rendering.[5] The Kumārajīva translation has been particularly highly regarded over the centuries, and it is this version that appears on the 868 CE Dunhuang scroll. In addition to the Kumārajīva translation, a number of later translations exist. The Diamond Sūtra was again translated from Sanskrit into Chinese by Bodhiruci in 509 CE, Paramārtha in 558 CE, Xuanzang in 648 CE, and Yijing in 703 CE.[6][7][8][9]

A traditional pocket-sized folding edition of the Diamond Sūtra in Chinese.

The Diamond Sūtra, like many Buddhist sūtras, begins with the famous phrase "Thus have I heard" (Skt. evaṃ mayā śrutam). In the sūtra, the Buddha has finished his daily walk with the monks to gather offerings of food, and he sits down to rest. Elder Subhūti comes forth and asks the Buddha a question. What follows is a dialogue regarding the nature of perception. The Buddha often uses paradoxical phrases such as, "What is called the highest teaching is not the highest teaching".[10] The Buddha is generally thought to be trying to help Subhūti unlearn his preconceived, limited notions of the nature of reality and enlightenment.

A list of vivid metaphors for impermanence appears in a popular four-line verse at the end of the sūtra:[11]

All conditioned phenomena
Are like dreams, illusions, bubbles, or shadows;
Like drops of dew, or flashes of lightning;
Thusly should they be contemplated.

In the Zen school

The extant copy has the form of a scroll, about 16 feet long. The archaeologist Sir Marc Aurel Stein purchased it in 1907 in the walled-up Mogao Caves near Dunhuang in northwest China from a monk guarding the caves - known as the "Caves of a Thousand Buddhas".

The colophon, at the inner end, reads:

Reverently made for universal free distribution by Wang Jie on behalf of his two parents on the 15th of the 4th moon of the 9th year of Xiantong [11 May 868].

This is approximately 587 years before the Gutenberg Bible was first printed.