Little Church Around the Corner

Little Church Around the Corner 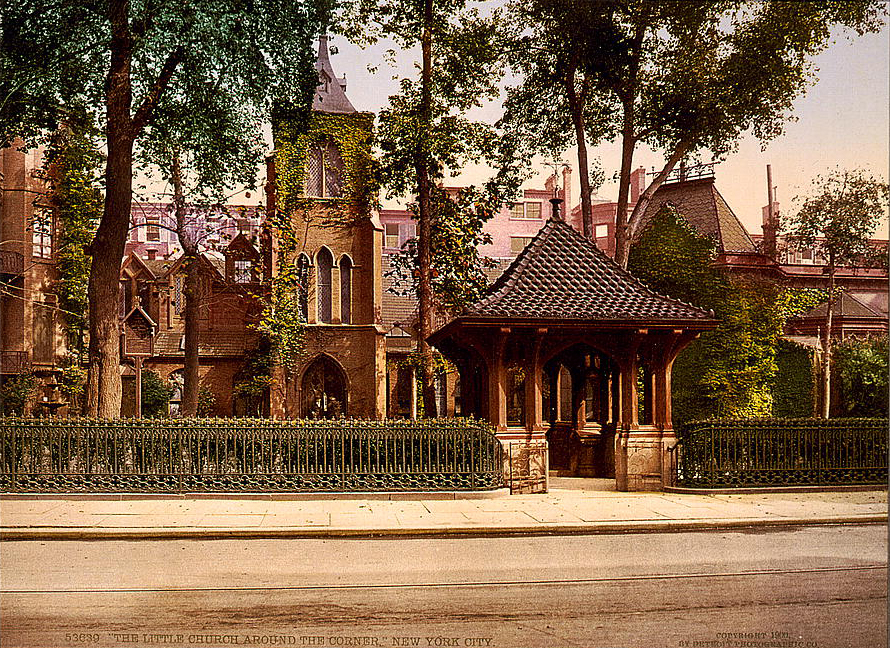 The Church of the Transfiguration, more often known as The Little Church Around the Corner, was founded in 1848 by the Rev. Dr. in . The first services were held in a home at 48 East 29th street and in 1849 the new church was built and consecrated.

Located at 1 East 29th Street,in the Murray Hill District, the church is set back from the street behind a garden creating a facsimile of the English countryside in midtown and has long been an oasis for New Yorkers of all faiths who relax in the garden, pray in the chapel or enjoy free weekday concerts in the main church. It has also been known as the "wedding church" because of the popularity of the church for weddings.

The “Little Church Around the Corner,” was founded in 1848 “to embrace all races and classes.” Designed in the early style and with its quaint retains a picturesque quality of a true English parish church, despite being in sight of the Empire State Building. The church also features numerous and eclectically designed side chapels and a 14th century stained glass window.

Transfiguration has been a leader of the movement within the Episcopal Church from its founding. While this movement often is associated with elaborate worship, it also has stressed service to the poor and oppressed from its earliest days. Dr. Houghton built a congregation that cut across class and racial ines, sponsored bread lines to feed the hungry, worked vigorously for the abolition of slavery and harbored runaway slaves. In 1863, during the Civil War Draft Riots Houghton gave sanctuary to es who were under attack. The rioters blamed slaves and freedmen for the war and the draft.

Ties to the theater

Actors were among the social outcasts whom Dr. Houghton befriended. In 1870 the rector of a nearby church refused to conduct funeral services for an actor named (the father of Joseph and {1}), but suggested that a "little church around the corner" probably would do "that sort of thing." , a fellow actor who was trying to arrange Holland's burial, exclaimed "God bless the little church around the corner!" and the church began a long standing association with the theater.

, when living in as a young writer of novels and lyrics for musicals, married his wife Ethel at the Little Church in September 1914. Subsequently Wodehouse would set most of his fictionalised weddings at the church; and the hit musical "Sally" he wrote with and ended with the company singing, in tribute to the congregation: "Oh dear little Church 'Round the Corner / Where so many lives have begun / Where folks without money / see nothing that's funny / In two living cheaper than one".

Actor of "" fame was married here (for a second time). In 1923 the [http://www.actorsguild.org/ Episcopal Actors' Guild] held its first meeting at Transfiguration. Such theatrical greats as , , , , and have served as officers or council members of the guild.

In 1973, The Little Church was listed on the in recognition of its position as a shrine of the American church and theater.

This is also the church where Sex and The City's Samantha met "Friar Fuck".

The church has long been associated with a program of fine music. The tradition of a men and boys choir has been maintained with special music for concerts and summer services provided by a choir of mixed voices. In 1988 the Arnold Schwartz Memorial organ, a new tracker was built and installed at the church by C. B. Fisk, Inc.Sunday
* 8:00 am Morning Prayer
* 8:30 am Low Mass
* 11:00 am Solemn Mass (Followed by Coffee Hour)Monday - Friday
* 8:40 am Morning Prayer
* 12:10 pm Low Mass
* 5:10 pm Evening Prayer(The Monday and Wednesday Holy Eucharists include the Rite of Healing)

* [http://www.littlechurch.org/ Official website of the Little Church Around the Corner]
* [http://sacredmusicamerica.com/harmony/lccsound.html The Anglican Musical Tradition - Church of the Transfiguration]
* [http://ship-of-fools.com/Mystery/2005/1161.html Ship of Fools - Mystery Worshipper]
* lists two famous persons in their [http://www.findagrave.com/php/famous.php?page=cem&FScemeteryid=1982947 Columbarium]