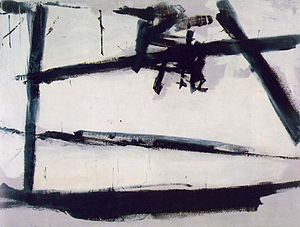 Action painting sometimes called "gestural abstraction", is a style of painting in which paint is spontaneously dribbled, splashed or smeared onto the canvas, rather than being carefully applied.[1] The resulting work often emphasizes the physical act of painting itself as an essential aspect of the finished work or concern of its artist.

The term was coined by the American critic Harold Rosenberg in 1952[2] and signaled a major shift in the aesthetic perspective of New York School painters and critics. According to Rosenberg the canvas was "an arena in which to act". While abstract expressionists such as Jackson Pollock, Franz Kline and Willem de Kooning had long been outspoken in their view of a painting as an arena within which to come to terms with the act of creation, earlier critics sympathetic to their cause, like Clement Greenberg, focused on their works' "objectness." To Greenberg, it was the physicality of the paintings' clotted and oil-caked surfaces that was the key to understanding them as documents of the artists' existential struggle.[citation needed]

Rosenberg's critique shifted the emphasis from the object to the struggle itself, with the finished painting being only the physical manifestation, a kind of residue, of the actual work of art, which was in the act or process of the painting's creation.

Over the next two decades, Rosenberg's redefinition of art as an act rather than an object, as a process rather than a product, was influential, and laid the foundation for a number of major art movements, from Happenings and Fluxus to Conceptual, Performance art, Installation art and Earth Art.

It is essential for the understanding of action painting to place it in historical context. A product of the post-World War II artistic resurgence of expressionism in America and more specifically New York City, action painting developed in an era where quantum mechanics and psychoanalysis were beginning to flourish and were changing peoples perception of the physical and psychological world; and civilization’s understanding of the world through heightened self-consciousness and awareness.

The preceding art of Kandinsky and Mondrian had freed itself from the portrayal of objects and instead tried to evoke, address and delineate, through the aesthetic sense, emotions and feelings within the viewer. Action painting took this a step further, using both Jung and Freud’s ideas of the subconscious as its underlying foundations. The paintings of the Action painters were not meant to portray objects per se or even specific emotions. Instead they were meant to touch the observer deep in the subconscious mind, evoking a sense of the primeval and tapping the collective sense of an archetypal visual language. This was done by the artist painting "unconsciously," and spontaneously, creating a powerful arena of raw emotion and action, in the moment. Action painting was clearly influenced by the surrealist emphasis on automatism which (also) influenced by psychoanalysis claimed a more direct access to the subconscious mind. Important exponents of this concept of art making were the painters Joan Miró and André Masson. However the action painters took everything the surrealists had done a step further.