Dazaifu (太宰府市, Dazaifu-shi?) is a city located in Fukuoka Prefecture, Japan.[1] Nearby cities include Ōnojō and Chikushino. Although mostly urban, it does have arable land used for paddy fields and market gardening.

The city was officially founded on April 1, 1982, although it has been important historically for around a thousand years.

Dazaifu was the imperial office governing Kyūshū, corresponding to Tagajō in Tōhoku, was moved from present-day Fukuoka after 663. Dazaifu hosted foreign embassies from China and Korea. Kōrokan, a guesthouse for foreign embassies, was also established. From the Nara period through the Heian period and until the Kamakura period, Dazaifu was one of the military and administrative centers of Japan. In the Heian period, Dazaifu was a place of exile for high-ranking courtiers. Nobles exiled there include Sugawara no Michizane[2] His grave is at Dazaifu Tenman-gū.

Dazaifu was sometimes attacked by rebels. At other times the head of Dazaifu himself raised a rebellion.[chronology citation needed]

With the invasions of the Mongols and the decline of imperial authority, Dazaifu became less politically significant. In the Muromachi period the political center of Kyūshū was moved to Hakata.

In medieval times, Dazaifu was the base of the Shōni clan.[1] The Shōni were later expelled by the Ōuchi clan.

In the Edo period, Dazaifu was a part of the Kuroda han until its abolition in 1873.

The Kyushu National Museum opened on October 16, 2005. A wood and glass building in a hilly landscape, it hosts collections of Japanese artifacts related to the history of Kyūshū.

Kōmyōzen-ji is a Zen temple famous for its stone garden. It was built during the Kamakura period just next to Dazaifu Tenman-gū. All three are within walking distance of Nishitetsu Dazaifu Station. Another temple, Kanzeon-ji, was built in the 8th century. It was once the chief Buddhist temple on Kyūshū[3] and houses a number of historical, artistic, and religious treasures.

The ruins of the medieval Dazaifu Administrative Buildings, also located within walking distance of Dazaifu Station, are today a public park.

There is small museum about Sugawara no Michizane who died here in exile in Kyushu in 903.[1]

There are several universities in the city:

Area primary and secondary schools are administered by the Dazaifu Board of Education. 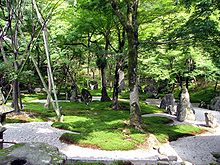