A cleaver in use

A cleaver is a large knife that varies in its shape but usually resembles a rectangular-bladed hatchet. It is used mostly for hacking through bones as a kitchen knife or butcher knife, and can also be used for crushing via its broad side, typically garlic.

In contrast to other kitchen knives, the cleaver has an especially tough edge meant to withstand repeated blows against meat and bone. This is accomplished by using a softer steel and thicker blade – a harder steel and thinner blade will fracture more readily. Formally, weaker knives would suffer buckling failure when used in a cleaving fashion.

The edge of a cleaver does not need to be particularly sharp, because the knife's design, like a hatchet or axe, relies on its weight to cut efficiently. In fact, the presence of a "razor-edge" on a cleaver can be counterproductive as it will rapidly degrade with use. Accordingly, the grind is generally wider – a 25° edge angle (50° included angle) is common, compared to 20–22° for most Western kitchen knives, and 15–18° for East Asian kitchen knives.

The tough metal and thick blade of a cleaver also makes it a suitable tool for crushing with the side of the blade. This contrasts with hard, thin slicing knives, which should not be used for crushing – they can crack under repeated stress.

Cleavers are primarily used for cutting through thin or soft bones and sinew, or through hard vegetables such as squash, where twisting may chip or shatter a slicing blade. For example, a cleaver is well-suited to cutting apart a chicken, which has thin bones, or separating ribs.

Cleavers are not used for cutting through thick, hard bones – instead, one employs a bone saw, either manual or powered.

Cleavers occur with some frequency in traditional Chinese thought.

An old Zen story on the proper use of a cleaver tells of a butcher who effortlessly cut ox carcasses apart, without ever needing to sharpen his cleaver. When asked how he did so, he replied that he did not cut through the bones, but rather in the space between the bones.[1]

In explaining his ideal of junzi, Kǒng Fūzǐ remarked "Why use an ox-cleaver to carve a chicken?" on the futility of the common people seeking to emulate noblemen.[2] 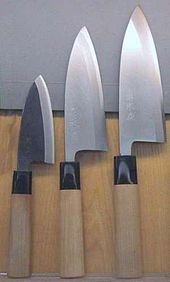 In Japanese cutlery, the main cleaver used is the light-duty deba bocho, primarily for cutting the head off fish (fish are the main meat in traditional Japanese cuisine).

For crushing vegetables, a shamoji (rice paddle) is used instead of the thin knives generally used in Japanese kitchens.

The Chinese chef's knife is frequently incorrectly referred to as a Chinese "cleaver" due to the similar rectangular shape. Although the Chinese chef's knife looks much like the cleavers familiar in butcher shops in Europe and North America, Chinese chef knives are much thinner in cross-section and are intended more as general-purpose kitchen knives, as a chef's knife. A Chinese chef's knife is mostly used to slice boneless meats, chop, slice, or mince vegetables, and to flatten garlic bulbs or ginger, while also serving as a spatula to carry prepared ingredients to the wok.

For butchering tasks and to prepare boned meats, the Chinese have long produced a heavier series of 'bone' cleavers designed to take care of tasks similar to the Western meat cleaver.