Zhang Dan
This is a Chinese name; the family name is Zhang.

The unrelated Zhang Dan and Zhang Hao teamed up in 1997. They immediately had a lot of success on the junior circuit. They won two medals on the Junior Grand Prix in their first year on it and then placed 5th at the Junior Grand Prix Final. They also won the bronze medal at the 1999 Chinese national championships and the silver at the 2000 Chinese national championships.

In the 2000-2001 season, they won the Junior Grand Prix Final, placed third at nationals, and then won Junior Worlds. At the 2000 Junior Worlds, they performed a quadruple twist, the first quad twist ever performed at that event.

They stayed in the junior ranks in the 2001-2002 season, winning the Junior Grand Prix Final yet again. They won the bronze medal at the 2002 Four Continents Championships and then went to the 2002 Olympics, where they placed 11th. After the Olympics, they went to their first Worlds and came in 9th place.

Following that season, Zhang and Zhang became serious contenders. They consistently medaled at their Grand Prix events. They won the 2005 Four Continents Championships and then won the bronze at the 2005 Worlds.

Zhang and Zhang went into the 2006 Olympics as medal contenders. They had planned a throw quadruple salchow jump for the free skate, a jump which had not yet been landed in competition. Zhang Dan fell on it during the free skate and suffered an injury, but chose to finish the program. There was a minor controversy about finishing the program because while Zhang Dan had been lying on the ice from the fall, the referee had stopped the music, and the Zhangs took a certain amount of time to restart the program. ISU rules say that the program can be continued if the referee agrees the stoppage was due to a valid reason, such as injuries or equipment failures. Once the referee has approved a continuation, the skaters are given two minutes to continue the program from the point where the music stopped. Zhang regrouped within this period and was able to finish the program. They won the silver medal, placing ahead of defending Olympic medalists Shen Xue & Hongbo Zhao. At Worlds, they won the silver, behind Pang Qing & Tong Jian.

In the 2006-2007 season, Zhang and Zhang placed first at Skate Canada, second at the NHK Trophy, and would go on to place third at the Grand Prix Final. They placed 5th at the 2007 World Figure Skating Championships later that season.

Before the 2010-2011 season began, her partner Hao broke his finger, forcing the team to pull out of their two Grand Prix assignments. He also dealt with some shoulder and cervical vertebra problems.[7]

On February 14, 2011, the Zhangs' ages became the subject of controversy. Although her International Skating Union bio lists Zhang Dan as born on October 4, 1985, a Chinese skating association website suggested she was born on that day in 1987.[2] This would mean that during the 2001-02 season she was 14 and too young to compete in senior events such as the Four Continents where they won bronze, as well as the Olympics and World Championships.[2] Her partner's age also came under scrutiny. His ISU bio states that he was born on July 6, 1984 but the Chinese website suggested he was born on February 6, 1982, making him too old to compete in junior events during the 2002-03 season, such as the 2003 World Junior Championships where they won gold.[2] The dates disappeared from the website by February 15.[8] On February 17, the ISU said there were no discrepancies for the Zhangs in terms of the birthdates listed on their passports, ISU registration forms and the Chinese Olympic Committee's website.[8]

Zhang & Zhang on the podium at the 2009 World Championships. 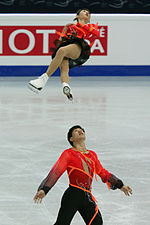