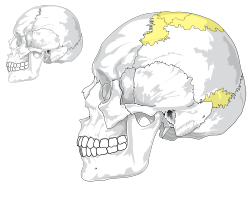 Wormian bones, also known as extra sutural bones[1] are extra bone pieces that occur within a suture in the cranium. These are irregular isolated bones which appear in addition to the usual centers of ossification of the cranium and, although unusual, are not rare.[2] They occur most frequently in the course of the lambdoid suture, which is more "torturous" of a suture. They are also occasionally seen within the sagittal and coronal sutures. A large wormian bone at lambda is often referred to as an Inca bone (Os Incae),[3] due to the relatively high frequency of occurrence in Peruvian mummies. Another specific wormian bone, the pterion ossicle, sometimes exists between the sphenoidal angle of the parietal bone and the great wing of the sphenoid bone.[4] They tend to vary in size and can be found on either side of the skull. Usually, not more than several are found in a single individual, but more than one hundred have been found in the skull of a hydrocephalic adult.

Derivation of the name

Ole Worm, Professor of Anatomy at Copenhagen, 1558–1654, He taught Latin, Greek, physics and medicine. Main contributions to science in embryology, Wormian bones of the skull have been named after him.