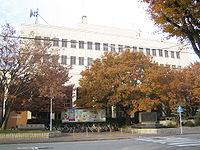 “Chiryū” as a local place name appears in documents in the Nara period. During the Edo period, the area prospered as Chiryū-juku, one of the post stations on the Tōkaidō connecting Edo with Kyoto. The town was noted for its horse trading fairs. Part of the present day city were under the control of Kariya Domain, a feudal han under the Tokugawa shogunate.

After the Meiji restoration, Chiryū Town was created within Hekikai District, Aichi Prefecture on October 1, 1889. It attained city status on December 1, 1970.

The Kikatsubata is the prefectural flower of Aichi prefecture as well as of Chiryū City. Each year at the end of April a festival is held in the temple garden as a celebration of the flowering.