Princess Maud of Wales (Maud Charlotte Mary Victoria; 26 November 1869 – 20 November 1938) was Queen of Norway as spouse of King Haakon VII. She was a member of the British Royal Family as the youngest daughter of King Edward VII and Alexandra of Denmark and granddaughter of Queen Victoria and also of Christian IX of Denmark. She was the younger sister of George V. Queen Maud was the first queen consort of Norway since 1380 who was not also queen consort of Denmark or Sweden.

Princess Maud of Wales (centre) as a teenager, together with her sisters Louise (left) and Victoria (right).

Princess Maud of Wales was born at Marlborough House, London as the daughter of Albert Edward, Prince of Wales, the eldest son of Queen Victoria and at that time heir apparent to the British throne. Her mother was Princess Alexandra of Denmark.

Princess Maud was christened at Marlborough House by John Jackson, Bishop of London, on 24 December 1869. Her godparents were her paternal uncle The Prince Leopold (for whom The Duke of Cambridge stood proxy); Prince Frederick William of Hesse-Kassel (represented by Prince Francis of Teck); Count Gleichen; the Duchess of Nassau (for whom Princess Francis of Teck); the King of Sweden and Norway (who was represented by Baron Hochschild, the Swedish minister); the Princess of Leiningen (represented by Claudine Rhédey von Kis-Rhéde); her maternal aunt the Tsarevna of Russia (represented by the Baroness de Brunnow, the Russian ambassador's wife); the Crown Princess of Denmark (represented by Madame de Bülow, the Danish Minister's wife); and the Duchess of Inverness (widow of Queen Victoria's uncle the Duke of Sussex).

She was a high-spirited child, a quality that earned her the nickname Harry. Maud took part in almost all the annual visits to the Princess of Wales's family in Denmark and later accompanied her mother and her sisters on cruises to Norway and the Mediterranean. She, along with her sisters Princess Victoria and Princess Louise, received the Imperial Order of the Crown of India from Queen Victoria on 6 August 1887. Like her sisters, Princess Maud also held the First Class of the Royal Order of Victoria and Albert and was a Dame Grand Cross of the Order of the Hospital of St. John of Jerusalem.

Royal Monogram as Queen of Norway 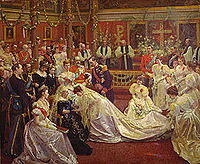 The Marriage of Princess Maud of Wales

On 22 July 1896, Princess Maud married her first cousin, Prince Carl of Denmark, in the private chapel at Buckingham Palace. Prince Carl was the second son of Crown Prince Frederick of Denmark, Queen Alexandra's elder brother, and Princess Louise of Sweden. The bride's father, the Prince of Wales, gave her Appleton House on the Sandringham Estate, as a country residence for her frequent visits to England. It was there that the couple's only child, Prince Alexander, was born on 2 July 1903. Tor Bomann-Larsen suggested that the birth of the couple's only child after seven years of marriage may have been the result of an early form of artificial insemination.[1]

Prince Carl was an officer in the Danish navy and he and his family lived mainly in Denmark until 1905. In June of that year, the Norwegian parliament, Storting, dissolved Norway's ninety-one year-old union with Sweden and voted to offer the throne to Prince Carl. Following a plebiscite in November, Prince Carl accepted the Norwegian throne, taking the name of Haakon VII, while his young son took the name of Olav. King Haakon and Queen Maud were crowned at the Nidaros Cathedral in Trondheim on 22 June 1906, the last coronation of a Scandinavian monarch.

Queen Maud, together with her husband, Haakon VII of Norway, and their son Crown Prince Olav.

Queen Maud never lost her love of Britain, but she quickly adapted to her new country and duties as a queen consort. She supported charitable causes, particularly those associated with children and animals, and gave encouragement to musicians and artists. She learned to ski and arranged for an English garden at Kongsseteren, the Royal lodge overlooking the nation's capital Oslo. Queen Maud's last public appearance in Britain was the coronation of her nephew, King George VI, in May 1937. She sat in the royal box at Westminster Abbey next to her sister-in-law Queen Mary and her niece Mary, Princess Royal.

Maud also acquired a reputation for dressing with fashionable chic. An exhibition of numerous items from her elegant wardrobe was held at the Victoria and Albert Museum in 2005.

Maud died of heart failure in London on 20 November 1938, six days before her 69th birthday (and the thirteenth anniversary of her mother's death), three days after an operation. Her body was returned to Norway on board the HMS Royal Oak, the flagship of Second Battle Squadron of the Royal Navy's Home Fleet. Queen Maud was buried in the royal mausoleum at the Akershus Castle in Oslo. At her death, Queen Maud was the last surviving child of King Edward VII and Queen Alexandra. 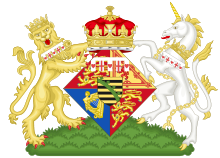 Upon her marriage, Maud was granted the use of a personal coat of arms, being those of the kingdom, with an inescutcheon of the shield of Saxony, differenced with a label argent of five points, the outer pair and centre bearing hearts gules, the inner pair crosses gules.[2] The inescutcheon was dropped by royal warrant in 1917.