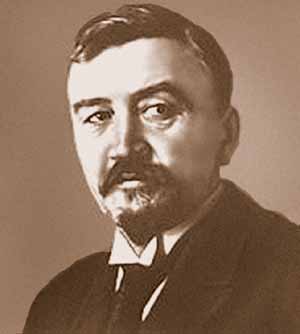 Aleksandr Ivanovich Kuprin (Александр Иванович Куприн, , (, OS) in the town of in the

Kuprin was a son of a Liubov' Alekseevna Kuprina, princess(of the Kulunchakovs)

Kuprin left military service in 1894, after which he tried his hand at all sorts of jobs, including provincial journalism, dental care, land surveying, acting, circus performer, church singer, doctor, hunter, fisher, etc. Reportedly, "all of these were subsequently reflected in his fiction." His first essays were published in in two collections. Reportedly, "although he lived in an age when writers were carried away by literary experiments, Kuprin did not seek innovation and wrote only about the things he himself had experienced and his heroes are the next generation after Chekhov's pessimists." His early short stories, including several on horses and other animals, seethe with love of life in all its manifestations.

Although the 1896 short story "Moloch" first made his name known as a writer, it was his novel "The Duel" (1905) which brought him fame in literary circles. [Nicholas J. L. Luker (1982). "An Anthology of Russian Neo-realism: The "Znanie" School of Maxim Gorky", ISBN 0882334212 - Page 137] It was this work that made him famous in contemporary literary circles and "Kurpin was highly praised by fellow writers including , , , Nobel Prize-winning " and who acclaimed him a true successor to Chekhov. After "The Duel" he paid less and less interest to high literature and began to share his time between pubs and brothels. His sensationalist novel about the lurid life of prostitutes, "The Pit" (1915), was accused by Russian critics of excessive Naturalism.

Although not a conservative himself, he did not agree with . While working for a short time with at the publishing house, he criticized the Soviet regime. In spring 1919, from near Petrograd, Kuprin left the country for . He lived in for most of the next 17 years, succumbing to He wrote about this in much of his work. He eventually returned to on , , just a year before his death, at the height of the . His return paved the way for publication of his works within .

Reportedly, "even today, Alexander Kuprin remains one of the widest read classics in Russian literature," with many films made based on his works, "which are also read over the radio," partly due to "his vivid stories of the lives of ordinary people and unhappy love, his descriptions of the military and brothels, making him a writer for all times and places."