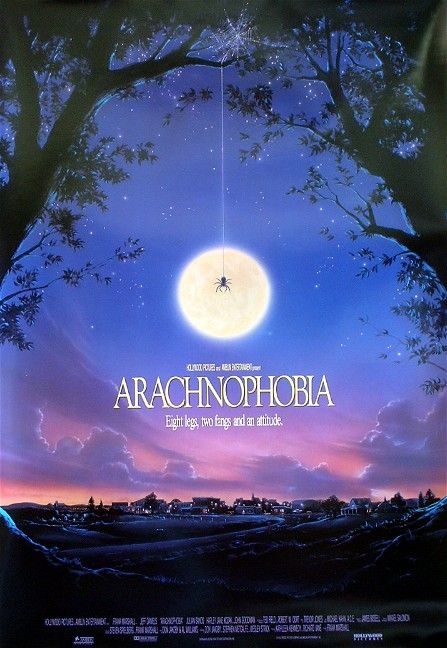 A deadly spider from the n Amazon is brought into the through the inside of the coffin of one of its victims, dead nature photographer Jerry Manley (). It then breeds with local spiders, creating a new type of spider that invades the small town of Canaima, California. The film focuses on Ross Jennings (Daniels), who is new to the town and faces a lack of patients due to elderly rival Sam Metcalf, who was supposed to retire and give his patients to Ross. It is established that Ross has a fear of spiders. Ross' reputation is severely damaged as his few patients begin to die, but this is the work of the spiders rather than his neglect. After Metcalf is himself killed by one of the spiders, it is realized that the town is infested with deadly arachnids, and with the help of exterminator Delbert McClintock (Goodman), Dr. James Atherton () and his assistant Chris Collins (), an effort is made to wipe out the species. Eventually the "queen" is traced back to Ross's own basement, where he manages to overcome his fear enough to kill the creature.The movie ends with the Jennings family back in . As Ross and his wife Molly () enjoy a fine wine, an occurs. While checking the kids, an happens.

Filmmaker was involved with "Arachnophobia", with one of his earlier producers Frank Marshall directing for the first time. Spielberg and Marshall are both the executive producers of the film.

, of "" fame, stated in "" [Page 44, Nov 2006 issue] that "Arachnaphobia" was one of the first movies he worked on and that he often relied on simple magnets for several of the effects.

The film made use of 374 Avondale spiders, which were picked for their large size, lack of actual venom, and unusually social lifestyle. They were guided around the set by the use of heat and cold, but the large "queen" was an articulated model.

To create the s of spiders being stepped on or squashed, people stepped on mustard packs or crunched s. [Rick Gamble, "A stinging commentary," "Expositor", Brantford, Ontario: April 22, 2006, pg. D.7.]

"Arachnophobia" was the first film released by ,

The film was a financial success,

In his book, critic calls the film a "slick comic thriller" and approves of the acting, warning, "Not recommended for anyone who's "ever" covered their eyes during a movie." "" associated the film with s "about the small town threatened by alien invaders," and said it was well made but "oddly unresonant." [D. Ansen, "A choice of chuckles," "Newsweek", 23 July 1990, vol. 116, issue 4, p. 64.] said it made audiences "squirm out of enjoyment, not terror," and listed details in the film that he felt were typical of such films, including "the bright young doctor, whose warnings are ignored" and "the loyal wife and kids," as well as "the usual cats and dogs, necessary for the obligatory scene in which they can sense something even when the humans can't." He gave the film three stars. [Roger Ebert, "Arachnophobia," "", July 18, 1990.] The film won a from The , Fantasy and Horror films for Best Horror Film and Best Actor (Daniels). Young actress was nominated for a best actress award from the .

The film drew protests from some people interested in spiders, as they believed the film tarnished the public image of spiders.

A for the film, also called "Arachnophobia", was released in 1990. It included instrumental music from the film as well as songs such as "Blue Eyes Are Sensitive To The Light" by and "" by .

*, a film about giant spiders invading an Arizona town