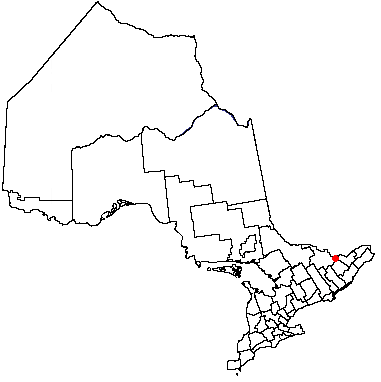 Arnprior (2006 Population 7,158 [Statistics Canada, [http://www12.statcan.ca/english/census06/data/profiles/community/Details/Page.cfm?Lang=E&Geo1=CSD&Code1=3547002&Geo2=PR&Code2=35&Data=Count&SearchText=Arnp&SearchType=Begins&SearchPR=35&B1=All&Custom= 2006 Community Profiles: Community highlights for Arnprior] . Retrieved on , .] ; UA population 9,076) is a in eastern Renfrew County, in eastern , at the mouth, EL convert|243|ft|m, of the Madawaska River, as it enters the in the . The town is a namesake of Arnprior, , and is known for lumber, hydro power generation, aerospace, farming and its proximity to the national capital region.

In [http://www.ottawariver.org/pdf/31-ch5-3.pdf 1823] , a convert|1200|acre|km2|sing=on surveyed block, was ceded to [http://www.bytown.net/lairdmcn.htm Archibald McNab] and given the eponomous name, McNab Township. McNab had approval from the [http://www.thecanadianencyclopedia.com/index.cfm?PgNm=TCE&Params=A1ARTA0002719 Family Compact] to treat the settlers on his land in the feudal manner practiced in Scotland. Iin 1831 the town was named by the Buchanan Brothers after McNab's ancestral home of Arnprior, .

Tired of the harsh treatment, the settlers revolted and, after a [http://www.collectionscanada.gc.ca/confederation/023001-2001-e.html government investigation] , he was forced to vacate the area in 1841. Arnprior, Braeside and NcNab township grew as separate communities and boomed when they became incorporated into eastern Ontario's massive industry.

One of the most successful businessmen of the upper Ottawa was Daniel McLachlin, who built a massive sawmill at the confluence of the Madawaska and Ottawa Rivers, and expanded the community of Arnprior. [Library and Archives Canada, "Dictionary of Canadian Biography Online", " [http://www.biographi.ca/EN/ShowBio.asp?BioId=39272 McLACHLIN, Daniel (Donhuil)] ". Retrieved on , .] The lumber industry maintained a significant position until the closing of the [http://members.shaw.ca/beyondnootka/biographies/david_gillies.htm Gillies Mill] . One of the most enduring structures of the day was a grist mill built by the Buchanans on the west bank of the Madawaska River. The grey stone building served many purposes after it stopped being used as a grist mill, finally being operated as a restaurant and a gas station, first by the Beattie and then the Baird families, ending in 1974. The facility has been bought by Ontario Hydro prior to the restructuring on the bridge and the creation of a new weir to control the river. The building was consumed by fire in 1976. The forests of the period are represented in the Grove which is an excellent example of indigenous forest, grown after a fire in the 18th century. With individual specimens reaching convert|175|ft|m, [http://nhic.mnr.gov.on.ca/areas/areas_report.cfm?areaid=18444 these are the tallest white pines in Ontario] .

Arnprior became a recognized name in the numismatic trade. This has a special link to a local employer. In 1955 Playtex ordered some silver dollars for their employees. These coins are later found to show only two and one-half water lines instead of four to the right of the canoe. This variety becomes known as the Arnprior dollar.

The history of Arnprior is preserved and documented at the Arnprior and District Museum [Virtual Museum of Canada, " [http://www.virtualmuseum.ca/PM.cgi?LM=MuseumFlash&LANG=English&scope=Museum&Referer=Museum&mark=Search&start=1&

] ". Last updated , . Retrieved , .] (located in the [http://www.virtualmuseum.ca/pm.php?id=record_detail&fl=0&lg=English&ex=123&rd=55773&hs=0 former post office building] and library) and the Arnprior and District Archives [Ottawa Valley Guide, " [http://www.ottawavalleyguide.ca/arnpriorarchives.html Arnprior &amp; District Archives] ". Retrieved , .] (located next door in the basement of the public library). The [http://www.arnprior.ca/mhc/ArnpriorHCDS/HERITAGE%20SURVEY%20Madawaska%2035.pdf sandstone building] is the defining element in local architecture

The history of Arnprior was documented in popular form by Leo Lavoie, long-time Arnprior resident, in his book, "The Arnprior Story: 1823-1984".

The lumber trade continued in the form of the Gillies sawmill in nearby McNab Township until it's closing in 1993. Pictures of the early days of the lumbering industry are seen at the online [http://www.virtualmuseum.ca/pm.php?id=exhibit_home&fl=0&lg=English&ex=00000115 Charles Macnamara Retrospective] .

Kenwood Mills, initially a blanket manufacturer who developed woven fabrics for the pulp and paper industry, was a significant employer in Arnprior and was bought in 1918 by Huyck Corporation. They were a strong contributor to Arnprior remaining viable during the Depression. [Arnprior and District Archives, [http://www.adarchives.org/collections/96-0074.htm The Town and the Mill (Motion Picture Film)] , description of archival holdings. Most companies are moving out of Arnprior in favour of Mexico. Retrieved , .]

[http://www.sullivan.ca/about%20us.htm M J Sullivan and Sons] and Smith Construction companies, were significant economic drivers and employers based in Arnprior.

The airport at Arnprior was built for the British Commomwealth Air Training Plan and hosted No. 2 Flying Instructor School for the British Commonwealth Air Training Plan. Post War, the facility was used by the Canadian Military and a training base known as the [http://archives.cbc.ca/war_conflict/cold_war/clips/1463/ Civil Defense College] , later [http://www.publicsafety.gc.ca/prg/em/cemc/03abt_02-eng.aspx Emergency Measures Training Centre] .

After the Second World War, companies such as Playtex, Pfizer and Boeing came to Arnprior. Boeing Aircraft Company began manufacturing in 1955 and maintained an operation until selling to Arnprior Aerospace in October 2005.

The Madawaska River at McEwen's Creek was dammed to create [http://www.opg.com/power/hydro/ottawa_st_lawrence/arnprior.asp a peaking hydro station] with approval given in 1972. The dam, which became operational in 1976, has created a new body of water known as . This was the fifth and last dam to be built on the Madawaska River and they have a total generating capacity of 614 MW.

Agriculture has been a fixture surrounding Arnprior since the NcNab introduced the Scottish immigrants. The self sufficient farming tradition has been celebrated by the since 1854.

Arnprior has been served since 1945 by the .

Mayor: (first elected in 2003, re-elected , to a term which expires in 2010) Council [http://www.arnprior.ca/councilcontact.htm] consists of Mayor, Reeve and Five Councillors

Arnprior is served by five schools: three are administered by the (two elementary schools &mdash; and &mdash; and one regional secondary school,

is the only municipally sponsored sport in Arnprior. The represent the town in , which is the town's highest level of competition in this sport. The games are played at the [http://www.arnprior.ca/nsc.htm Nick Smith Centre] which features two year round ice rinks, a 25 metre indoor swimming pool, Fitness Centre and Community Hall with kitchen. The two ice rinks each have ice surface measuring 200' X 85'. Arena 'A' seating capacity of over 2,000; standing and seated 4,000 capacity.

was established, as a open-air sport in the Arnprior area, around 1865. The now occupies a 4-sheet building on Galvin Street (est. 1970).

The only print media dedicated to Arnprior is the Arnprior Chronicle-Guide. There is no independent, non-syndicated media coverage of Arnprior available in print form.

Arnprior is located on the system, where Highway 417 to the east becomes the two-lane Highway 17 to the west. The town is served by the , elevation 109 metres (358 ft) and a nearby floatplane base for ; scheduled commercial flights leave from the Ottawa/Macdonald-Cartier International Airport, 56 kilometres to the east.

Arnprior has a long history with railroads. The [http://www.railways.incanada.net/Articles/Article2003_3.html Canada Central Railway] first reached Arnprior on , . [ [http://www.railwaybob.com/Constituents/CPRConstituents.htm Constituents of Canadian Pacific Railway in Southern Ontario] .] The [http://www.railways.incanada.net/Articles/Article2003_3.html Easter Sunday, March 23, 1880] , change to brought the (CPR) main line. Later the (CNR) came and, through the majority of the 20th century, Arnprior was served by both major Canadian railways . The CNR tracks were pulled up and the right-of-way is used as a hiking trail, while the CPR continues to operate through the town.

The town is located at the of the Ottawa and Madawaska rivers. It is cut off from the lower Ottawa River and the by the Chats rapids, and now the Chats Falls Station. Following exploration, travel and transportation was by : the Ottawa River by Arnprior was a main route for the .

Arnprior, aka "the Prior", is the gateway to tourism in the Upper Ottawa Valley. [http://www.valleyexplore.com/drive/mightyottawa.htm] and the western gateway to [http://www.ottawa.ca/index_en.html Ottawa] , Canada's National Capital Region.

Anrprior is the start of the River Road that runs in close proximity along the Ottawa River through Braeside, Sand Point to join with Storyland Road.

Arnprior also holds an abundance of wildlife in the town's local forest, the Grove.

Of note are the many walking and biking trails in Arnprior. The Millennium and Macnamara Trails [http://www.arnprior.ca/trailspage.htm] provide scenic views of the waterfront, downtown heritage homes, and two nature trails including a walk-through of the Gillies Grove [http://www.arnprior.ca/grove.htm] , a 45 acre tract of Old Growth Forest, preserving the White Pine which was the foundation of the local lumber industry. Additionally the rivers and local lakes encourgae boating, fishing and [http://www.canoemuseum.net/ canoeing] .