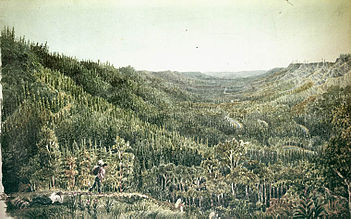 Portage La Loche by George Back in 1825

The Methye Portage or Portage La Loche in northwestern Saskatchewan was one of the most important portages in the old fur-trade route across Canada. It connected the Mackenzie River basin to rivers that ran east to the Atlantic. It was reached by Peter Pond in 1778 and abandoned in 1883 when steamboats began running on the Athabasca River with links to the railroad. It ranks with Grand Portage as one of the two most important and difficult portages in Canada.

'Methye' is Cree and 'La Loche' is French for a fish that is called 'Burbot' in English.

The Methye had been in use by indigenous peoples as a trade route for generations. They introduced it to Peter Pond[1] in 1778. Although Anthony Henday had come within sight of the Rocky Mountains in 1754 by overland routes to the south, the advance of western exploration was limited until this fur trade transportation route to the Athabasca opened. The portage was in constant use until 1883 when the Canadian Pacific Railway reached Calgary ending more than 100 years as the main access to the north.[2]:23 From the winter of 1822, York boats came into use on this route in addition to canoes. Furs were transported up the Clearwater River by crews who would bring them to the centre of the portage, where they would be picked up by crews from Norway House for that portion of their transport.[3]:705

It also allowed for the spread of smallpox to previously untouched aboriginal populations, decimating them in a matter of years.[citation needed]

The Methye was also used by Sir Alexander MacKenzie on his exploratory expedition to the west coast, an expedition which reached the Pacific Ocean in 1793, fully 12 years before the more famous Lewis and Clark expedition.

For background see Canadian Canoe Routes (early). The trade route began on Lake Winnipeg and ran west up the Saskatchewan River to Cumberland House, Saskatchewan north up the Sturgeon-Weir River, across Frog Portage to the Churchill River, west up the Churchill past the depot on Lac Île-à-la-Crosse, through Peter Pond Lake to Lac La Loche. The portage proper, which is 12 miles long, began at Wallis Bay on the north side of Lac La Loche. The path ascends slowly for 8 miles to the small Rendezvous Lake. Here crews coming from the north and south would exchange their loads (Different boats were used on the two sides of the portage and were rarely carried across it.). The path ascends slowly from Rendezvous Lake until there is suddenly a view of the Clearwater River valley and the path descends about 180 meters in three or four miles to the Clearwater. (The altitude of Lac La Loche is about 1460 feet, Rendezvous Lake about 1680 feet and the Clearwater about 1035 feet.) This section is so steep that sledges, horses and oxen were used. The portage road, which is wide enough for a wagon, is still visible. Leaving the portage the route went west down the Clearwater River into the Mackenzie River basin.

Lac La Loche with a view towards the Portage