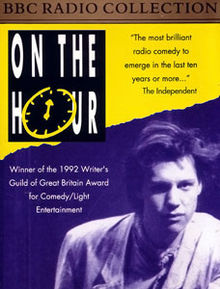 On the Hour was a British radio programme that parodied current affairs broadcasting, broadcast on BBC Radio 4 between 1991 and 1992.

Written by Chris Morris, Armando Iannucci, Steven Wells, Andrew Glover, Stewart Lee, Richard Herring and David Quantick, it starred Morris as the overzealous and self-important principal anchor (for which he used his own full name). He was accompanied by a regular cast of Steve Coogan, Patrick Marber, David Schneider, Doon Mackichan and Rebecca Front, who portrayed assorted news reporters, presenters and interviewees. The programme also featured the very first appearance of Coogan's character Alan Partridge as the Sportsdesk reporter.

As in much of Morris' work, surrealism was an important part of the programme, the nonsense in the content ("De-frocked cleric eats car park", "Borrowed dog finds Scotland", etc) delivered in the same straight-faced manner with which contemporary news stories are dealt, and it has often been quoted that Morris' initial intention was indeed to show how the public would believe anything if it was delivered with a straight-face. It did fool many people, with some listeners ringing in to complain about how the anchor treated his guests. The programme also utilised editing of out-of-context sound-clips and prank phone calls, heightening its surreal quality.

The satirical edge was equally significant, both the references within news programmes to the fact that they are reporting the news and repeating the show's title as well as such aspects as newsspeak, media-manipulation, exploitation of tragedies, patronising mistreatment of the general public, lack of fact-checking - personified by Marber's Peter O'Hanraha-hanrahan - and the general assumption that the programme itself is infallible ("On the Hour — Towards a New Eden"). Also satirised were party political broadcasts, chummy yet vacuous radio DJs (in the form of Morris' Wayne Carr), religious broadcasting, glossy magazines, 'fun' local events, local radio, youth information shows, Radio Four plays, Royal ceremonies and even satirical comedies that don't hit the mark - as well as the absurdities of life.

Twelve episodes were made (including a Christmas special, of which two versions exist) and broadcast in 1991 and 1992. The team (minus Lee and Herring due to creative/legal disputes, who were replaced by Peter Baynham and Father Ted writers Graham Linehan and Arthur Mathews) subsequently made a television series loosely based on it called The Day Today. The final programme closed with Morris introducing a set of headlines with the line "And there is still just time to part the beef curtains on tomorrow's news".

Due to the aforementioned dispute with Lee and Herring, the show was initially only commercially available (on audio cassette) as a two-hour audio compilation, edited down from the seven hours of both series and specials, which removed all traces of their writing.

Like many BBC Radio comedies, On the Hour has been repeated on BBC Radio 7 although most of these deviate from the original broadcast versions.[citation needed] Two episodes from Series One are regularly aired in their 30-minute form, being extended repeats from 1991, while Series Two transmissions are based on the edited repeats for BBC Radio 4. The penultimate episode of Series Two has not been repeated on BBC7. Off-air recordings of the original programmes are, however, available through file-sharing and torrent sites.

Both series were released [1] as two audio CD boxed sets on 24 November 2008 by Warp Records. Both series can also be purchased on iTunes.