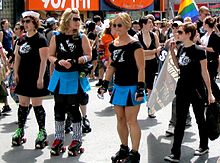 Participants at this 2007 Dyke March in Toronto exhibit both gender-neutral and feminine characteristics.

Lipstick lesbian is a slang term used to describe lesbian and bisexual women who exhibit extremely feminine gender attributes, such as wearing make-up (thus, lipstick), wearing dresses or skirts and having other characteristics associated with feminine women. Most female same-sex sex scenes in mainstream pornography are portrayed in this way.

The term was used in San Francisco at least as far back as the 1980s. In 1982, Priscilla Rhoades, a journalist with the gay newspaper The Sentinel, wrote a feature story on "Lesbians for Lipstick". The term is thought to have emerged in wide usage during the early 1990s. A 1997 episode of the television show Ellen widely publicized the phrase. In the show, Ellen DeGeneres's character, asked by her parents whether a certain woman is a "dipstick lesbian", explains that the term is "lipstick lesbian", and comments that "I would be a chapstick lesbian."

In 1999, columnist Mark Steyn called actress Anne Heche, who was dating DeGeneres at the time, "the world's most famous lipstick lesbian."[1]