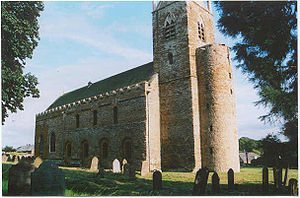 All Saints' Church, Brixworth, in Northamptonshire is an outstanding example of early Anglo-Saxon architecture located in central England, and has been called "perhaps the most imposing architectural memorial of the 7th century yet surviving north of the Alps"[1]. It is the largest English church which remains substantially as it was in the Anglo-Saxon period.

Brixworth is mentioned in the Peterborough Chronicle as being a monastery founded when Sexwulf became bishop of Mercia, before the death of King Wulfhere in 675AD. Many elements from the original building remain visible, although there are later additions, notably the tower, from further periods of building in the 10th, 13th and 19th centuries. The older building contains features typically found in architecture of a later period, for example an ambulatory.[2] Now it is a parish church and a Grade I listed building.

Roman architecture can be considered the precedent for early Christian church building; hence the term 'Romanesque'. The church design resembled the form of an Early Christian basilica, but with piers instead of columns.

What remains of the original building is an arcaded nave infilled with windows, a presbytery separated from the nave by a great arch, and an apse rebuilt in the nineteenth century on the original foundations. There is also a tower to the west.

Archaeological excavations have shown that the original church had side chambers, called porticus, which would have been in addition to the present nave. At the position of the present tower was a narthex, and original pillars now covered by flooring show that there was a three arched opening separating the nave from the presbytery. The original entrance would have been on the west, and the present south entrance was made in Norman times.

Reclaimed Roman stonework was used in the construction of the building; there was a large Roman villa nearby[3]. There is also the use of Roman-sized brick tiles in the arcading and other arches; the form of which are Roman in precedent. The re-use of Roman stonework can also be seen in other Anglo-Saxon buildings.

One unusual feature of All Saints, Brixworth, is the ambulatory running around the outside of the original apse below ground level. Originally steps led down to the ambulatory, which was covered by a barrel vault. The purpose of this ambulatory was probably to house or provide access to preserved relics.

The tower which replaced the narthex, with a stair turret, was added in the 10th century, still in Anglo-Saxon times, with the upper levels and spire added in the 13th century. This is one of four remaining Anglo-Saxon stair turrets in England, and is similar in design to the one at Brigstock church, a few miles away.

A triple arch was inserted into the existing masonry of the west nave wall at high level, replacing an existing arch. The arches are supported by baluster shafts, which are typical in Anglo-Saxon architecture, and can also be seen at the tower of All Saints' Church, Earls Barton, nearby.

Brixworth has been identified with Clofesho, the unidentified site of Anglo-Saxon synods in the 8th and 9th centuries, though there are other candidates; this might account for the unusually large size of the building by the standards of the time.