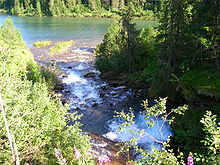 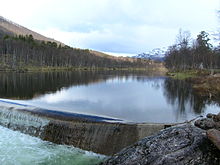 Dunderlandsdalen is a valley in Rana municipality in the county of Nordland, Norway. From just below the plateau of eastern Saltfjellet, it continues south-westward to the Ranfjord (latitude 66 20 N.). It's located 8 miles south of the Arctic circle.

European route E6 passes through Dunderlandsdalen. The tunnel Illhøllia tunnelen, between Nevermoen and Røssvoll, was opened in 2002. The Nordlandsbanen railway also follows the valley. Bolna is situated in the uppermost part of the valley.

The small valley is sight to several accidents and recorded events in Norwegian history. During the second world war, Nazis had several concentration camps in the valley. They mainly housed Polish and Russian prisoners, used to build the Nordlandsbanen railway from Trondheim. The stretch covering Saltfjellet was extremely brutal and many lost their lives building this. The German troops disposed the majority of the diseased the the Rana Elva (river). The strong currents made it almost impossible to recover anyone.

In 1948 the Dunderlandsdal-accident hit. To present day the worst bus accident in Norwegian history. A bus with native Norwegian Sami-people slid of the road and headed out in the Rana Elva (river). From the 23 people on board, 16 were never found. A memorial stone with engraved names of the dead, was placed on the accident sight in 1950. The sight is to present day, considered a holy place to the Sami people.

In 1953 a family tragedy struck the valley. A family was found slaughtered at a remote farm. A young girl at the age of 6 and her mother were found killed in the barn. The father was found hung in the same barn.

In 1995 another tragic event hit the valley. During a boy scout camp at an old farm, a 12 year old girl disappeared. The girl was from the town of Tromsø, in northern Norway. The event was widely covered in Norwegian press. Search crews went on it for two years, but all they found was her backpack. It was located by the Rana Elva (river).

Today the valley only house a small number of people and has an abandoned station on the Nordlandsbanen railway.

The mountain rocks in Dunderlandsdal is a caledonian shale, known from its occurrences of iron ore, mica schist and marble. Its mining industry has produced Fauske marble, also present on Fauske. On Storforshei, there have been a large-scale iron mining industry.

There are also pyrites mines. The valley has several stalactite caverns in the limestone, some of the tributary streams flowing for considerable distances underground. From the head of Dunderlandsdal a sequestered bridle-path runs to Saltdal on the Skjerstadfjord, with a branch through the magnificent Junkersdal.

Deposits of iron ore was known since 1799, and was worked out by Dunderland Iron Ore Company in several operative periods, the first one from 1902. The river Ranelva provided water-power. The company was dismantled in 1947.

Since 1937, Rana Gruber has worked out iron ore. Norsk Jernverk was established in 1946, and began in 1964 to work out magnetite and hematite from the iron ore.

Settlements in the stone age

There have been settlements in Dunderlandsdal since the stone age. In the summer of 2003 a Danish tourist discovered a «battle axe» (Streitaxe) close to the river of Eiterå. The axe was delivered to the Cultural Department of Rana Museum on July 1, 2004.[1]

This is the first discovery of the battle axe culture in inner parts of North Norway. In 1913, a 20 cm long axe from the same cultural horizon was discovered on Brattland in Utskarpen.

The axe is a «boat-axe» of Swedish-Norwegian type from 2800−2400 BC. It was no functional tool, but a dignity symbol of worthiness and a high social class. It may have belonged to a local chieftain.

The stripe on the backside of the axe resembles an edge from moulding, and is an imitation of moulded axes in bronze from Skåne or Denmark. According to the geologist Barbara Prisemann (Department of Natural history, Rana museum), the axe is made from the rock type green shale.

For the Sámi the valley has a special symbolic value due to a tragic incident that occurred about one hundred years ago. In the early 1900s a bus returning from a Sámi conference in Tromsø drove off the road and crashed into the river at the bottom of the valley. Most of the people aboard the bus died, and thus the South Sámi lost most of their political leaders in one single blow. There is a memorial on the site where the bus ran off the road, somewhat hidden in the forest but accessible from the road by a small stairway.