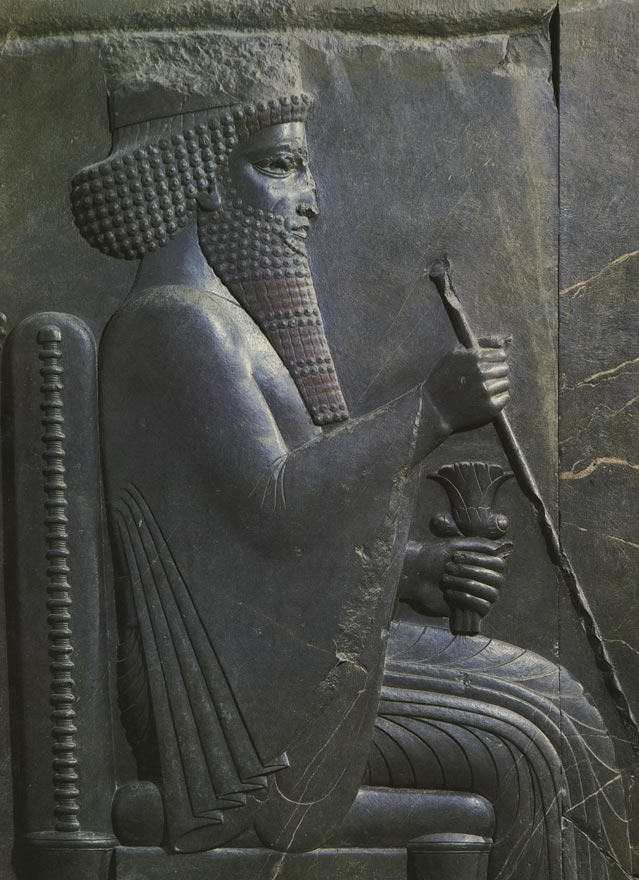 "The Persians" ( _el. Πέρσαι, "Persai") is an Athenian by the ancient Greek playwright . First produced in 472 BCE, it is the oldest surviving play in the . It dramatizes the Persian response to news of their military defeat at the (480 BCE), which was a decisive episode in the ; as such, the play is also notable for being the only extant Greek tragedy that is based on contemporary events.

"The Persians" was the second part of a trilogy that won the first prize at the dramatic competitions in Athens’ festival in 472 BCE. The first play in the trilogy was called "Phineus"; it presumably dealt with ’ rescue of King from the torture that the monstrous inflicted at the behest of Zeus. The subject of the third play, "", was either a mythical Corinthian king who was devoured by his horses because he angered the goddess or else a Boeotian farmer who ate a magical herb that transformed him into a sea deity with the gift of prophecy. [A catalogue of Aeschylean plays contains the two titles "Glaucus Potnieus" and "Glaucus Pontius" – hence the uncertainty. To add to the confusion, one title could easily be a garbled duplicate of the other. The consensus seems to favor "Glaucus Potnieus" (thus, e.g., Lesky 1996, 244). See, however Muller/Lewis 1858, 322.] In "The Persians", Xerxes was defeated because he angered the gods when he built a bridge across the Hellespont; given Aeschylus’ propensity for writing connected trilogies, the theme of divine retribution may connect the three. It has been argued by some that these plays would have indirectly forecast events of the Persian invasion. Based on their presumed content, ’ march through and his defeat at the in 479, respectively, seem likely candidates. [See Munn (2000, 30).] The following the trilogy, "Prometheus the Fire-lighter", comically portrayed the titan’s theft of fire.Fact|date=September 2008

"The Persians" takes place in (in modern ), at the time one of the capitals of the , and opens with a chorus of old men of Susa, who are soon joined by the Queen Mother, , as they await news of her son King Xerxes' expedition against the Greeks. Expressing her anxiety and unease, Atossa narrates "what is probably the first in European theatre." [Taxidou (2004, 99).] This is an unusual beginning for a tragedy by Aeschylus; normally the chorus would not appear until slightly later, after a speech by a minor character. An exhausted messenger arrives, who offers a graphic description of the and its gory outcome. He tells of the Persian defeat, the names of the Persian generals who have been killed, and that Xerxes had escaped and is returning. The climax of the messenger's speech is his rendition of the battle cry of the Greeks as they charged: "On, sons of Greece! Set free / Your fatherland, your children, wives, / Homes of your ancestors and temples of your gods! / Save all, or all is lost!" (401-405). [Raphael and McLeish (1991, 14). In the original, this reads: “ὦ παῖδες Ἑλλήνων ἴτε, / ἐλευθεροῦτε πατρίδ', ἐλευθεροῦτε δὲ / παῖδας, γυναῖκας, θεῶν τέ πατρῴων ἕδη, / θήκας τε προγόνων: νῦν ὑπὲρ πάντων ἁγών.”.]

At the tomb of her dead husband Darius, Atossa asks the chorus to summon his ghost: "Some remedy he knows, perhaps, / Knows ruin's cure" they say. [Raphael and McLeish (1991, 20).] On learning of the Persian defeat, Darius condemns the behind his son’s decision to invade Greece. He particularly rebukes as impious Xerxes’ decision to build a bridge over the to expedite the Persian army’s advance. Before departing, the ghost of Darius prophesies another Persian defeat at the (479 BCE): "Where the plain grows lush and green, / Where ' stream plumps rich Boeotia's soil, / The mother of disasters awaits them there, / Reward for insolence, for scorning God." [Raphael and McLeish (1991, 26).] Xerxes finally arrives, reeling from his crushing defeat. The rest of the drama (908-1076) consists of the king alone with the chorus lamenting the enormity of Persia’s defeat.

Aeschylus was not the first to write a play about the Persians--his older contemporary wrote two plays about them. The first, "The Seige of Miletus" (written in 493 BCE, 21 years before Aeschylus' play), treated the destruction of a Ionian colony of Athens in by the Persians; for his portrayal of this brutal defeat, which emphasized Athens' abandonment of its colony, Phrynichus was fined and a law was passed forbidding subsequent performances of his play. [See 6.21.2 and Taxidou (2004, 96-7).] The second, "Phoenician Women" (written in 476 BCE, four years before Aeschylus' version), treated the same historical event as Aeschylus’ "Persians". Neither of Phrynichus' plays have survived.

Interpretations of "Persians" either read the play as sympathetic toward the defeated Persians or else as a celebration of Greek victory within the context of an ongoing war. [For the first reading, see See, for example, Segal (1993, 165) and Pelling (1997, 1-19); for the second, see Hall (1996) and Harrison (2000). While there is some disagreement, the consensus is that the Persian Wars did not come to a formal conclusion until 449 BCE with the .] The sympathetic school has the considerable weight of Aristotelian criticism behind it; indeed, every other extant Greek tragedy arguably invites an audience's sympathy for one or more characters on stage. The celebratory school argues that the play is part of a culture that would find it difficult to sympathize with its hated barbarian enemy during a time of war. [See Hall (1991).] During the play, Xerxes calls his pains "a joy to my enemies" (1034).

Having won first prize in 472 BCE, the play was subsequently produced in in 467 BCE (one of the few times a play was produced twice during the lifetime of the author).Fact|date=September 2008 The version produced in 467 probably forms the basis of the surviving version, and may have been slightly different from the original.

Seventy years after the play was produced, the comic playwright mentions "The Persians" in his "Frogs" (405 BCE). In it, he has Aeschylus describe "The Persians" as "an effective on the will to win. Best thing I ever wrote"; while says that he "loved that bit where they sang about the days of the great Darius, and the chorus went like this with their hands and cried 'Wah! Wah!'" (1025-27). [See Barrett (1964, 194).]

"The Persians" was popular in the and , who also fought wars with the Persians and its popularity has endured in modern Greece. According to Anthony Podlecki, during a production at Athens in 1965 the audience "rose to its feet en masse and interrupted the actors' dialogue with cheers." [Podlecki (1986, 78).]

The American directed an important production of "The Persians" at the Edinburgh Festival and Los Angeles Festival in 1993, which articulated the play as a response to the of 1990-1991. The production performed a new translation by . [See Favorini (2003) and Banham (1998, 974).]