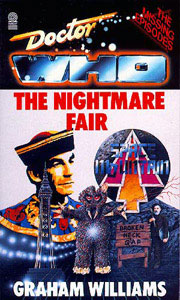 "The Nightmare Fair" is the first of a series of s, based on a number of cancelled scripts from the 1986 season of "". It was written by former series producer , and would have been directed by Matthew Robinson had it gone to air. It was first published by in 1989 as the first volume of its "Missing Episodes" series. It is the first novel-length text featuring The Doctor not to be based upon a previously telecast or broadcast production, although being a novelization it is not strictly speaking an "original" novel; the first such book would appear in 1991.

An closely based on Williams' script was released in May 2003, with profits going to the charity Sense. For this adaptation, the Sixth Doctor was played by Steve Hill, and Peri by Jennifer Adams Kelley. [http://www.type40.com/DW/dw_AudioDetails.asp?ID=360]

The and his companion Peri are lured in the to , where they discover that something is afoot in the local videogame arcade. The Doctor's old adversary the is behind it all, and the Doctor and Peri must fight their way through his videogames in order to defeat him.

It was announced in 1985 that , controller of BBC1, had cancelled a number of long running programmes in order to help fund the launch of a new soap opera named "". Of the many programmes that were cancelled (including such BBC icons as "", "" and ""), "Doctor Who" was the most high profile. A campaign was quickly launched by the national press to see about its return and Grade very quickly confirmed that "Doctor Who" would be returning in 1986.

Several stories had already been in the planning stages for the 23rd Season of "Doctor Who", three of which were in the middle of being scripted when the announcement was made. Former series Producer Graham Williams was to have written the season opener, featuring a return of the Celestial Toymaker as seen in the 1966 serial of the same name. Being the first slated for production, Williams script was by far the most advanced at the time of cancellation, with even Matthew Robinson (who had helmed "" and "" in the previous two seasons) pencilled in as director.

In 1988, , which had been successfully publishing novelisations of "Doctor Who" stories for many years, saw itself quickly running out of available televised material (although a number of serials remained unadapted, most of these were off-limits due to licensing problems). While negotiations went forward with the BBC for the publication of all new adventures, the decision was made to resurrect three of the cancelled scripts and publish them in book form. The writers of all three were approached, and all were signed on to write the novels. Being the most complete of these scripts, "The Nightmare Fair" required far less additional material than the other two, and in May 1989 it became the first to be published under the "Missing Episodes" banner. As such, it also became the very first full novel featuring the Doctor to be published based upon non-televised material (and the first of some 275 such releases from different publishers as of 2007).

The next two books in the series were "" by , released in August 1989, and "" by Philip Martin, published in July 1990 (the first "Doctor Who" novel based on non-televised material to be published after the end of the original series).

#The original ending of the 1985 series finale, "", had the Doctor telling Peri he was going to take her to Blackpool. Before broadcast, however, the decision was made to the Doctor before he says this. Williams' novelization of the serial does not, therefore, take its lead from the original ending of "Revelation". At the start of this novel TARDIS is drawn into "the nexus of the primeval cauldron of Space-Time itself" and he and Peri are surprised to find themselves in Blackpool.
#The novel "Divided Loyalties" ends with the Toymaker telling his companion Stefan "I'll take you to Blackpool", both setting up this story and pastiching the original end of "Revelation".