Infobox_Film
name = All About Anna 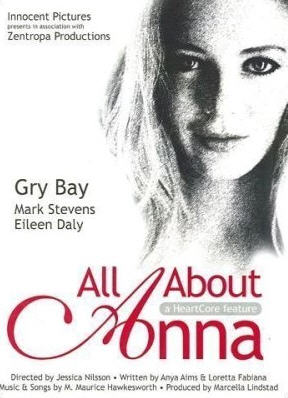 "All About Anna" is a Danish film released in , directed by and starring and . The film is explicit in its exploration of sexual relationships. It avoidsFact|date=July 2008 being classified as , however, through focus on character development and avoidance of closeup views of genital/genital contact.

It is a co-production between and 's Zentropa Productions, and is the third of Zentropa's sex films for women, following "Constance" (1998) and "" (1999). All three films were based on the [http://www.innocentpictures.com/aaa_manifest.php?la=en/ Puzzy Power Manifesto] developed by Zentropa in 1997.

"All About Anna" tells the story of Anna (), a single woman who seeks to maintain an active sex life while staying clear of romantic relationships. When a former boyfriend (Mark Stevens) shows up, she starts wondering how much longer she can maintain her emotional independence, and if that's even what she wants. At the same time, she is offered a job as costume designer on a French theatre, where the local stage actors Pierre () and Sophie () offer new amorous temptations.

"All About Anna" was officially selected for and .

It was included in the series "Cinematic Sexualities in the 21st Century", arranged by in collaboration with Film Studies Center.

In April 2008, U.S. trade journal "AVN" gave the film an AAAAA Editor's Choice Review. It was one of only four films to receive the journal’s highest rating that month. Critic wrote: "It is beautifully crafted and constantly entertaining. [...] The question is, why can’t mainstream American films move on up to this grown-up degree of sexual explicitness? Retailing: This title can be sold as either mainstream or adult — the best of both worlds." [AVN Magazine, April 2008, page 154: "Editor's Choice - All About Anna"]

The film exists in at least three versions. The original Scandinavian DVD release contains both the Producer's Cut and the Director's Cut. A Softcore Version with no explicit sexual footage has also been released (in Germany).

The successful US theatrical premiere was held on , , in , .

The two-disc US DVD was released on .