Lio Convoy is the name of a in various the . See also . 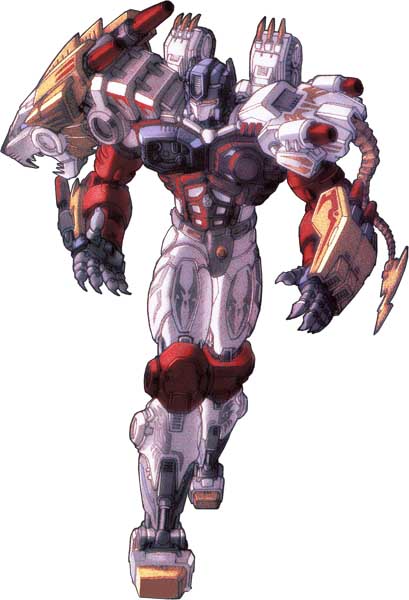 caption =Lio Convoy as he appeared in "Beast Wars The Gathering"
affiliation =Maximal
subgroup =Convoys
Deluxe Beasts
Ultra Beasts
function =Maximal Supreme Commander
partner =
motto ="I will protect the freedom of the Galaxy until the day I die and after that I will have no regrets."
alternatemodes =
series =
voiceby = (BWII)
()

Originally a brave and noble Maximal commander, after his ship was attacked by a group of renegade Predacons led by Galvatron, Lio Convoy was dispatched to pursue the Predacons and bring them to justice. Chasing them to the planet Gaia (in reality a future Earth), Lio Convoy was injured by the fields of (similar to the energon fields in Beast Wars). He was then rescued by a white lion, whose form he scanned to give him a beast mode for protection. However, believing him to be dying the Matrix had copied itself into another Maximal: , who came to think of himself as Lio Convoy's son.

After many adventures to prevent Galvatron from gaining the Angolmois energy, Lio Convoy would meet his foe one last time on the Nemesis, a planet-sized warship Galvatron intended to use to suck the energy out of planets. As his team sabotaged the Nemesis from within Lio Convoy and Galvatron clashed for the last time. Unable to defeat his Angolmois charged enemy, the two Matrixes combined their powers to merge Lio Convoy and Lio Junior, allowing them to defeat the insane Galvatron. Enraged by this defeat Galvatron set his own Matrix to self-destruct the Nemesis. Although the Maximals survived the explosion, they became trapped inside a wormhole.

"Beast Wars II" also produced a feature film entitled "Lio Convoy is in Imminent Danger!" In this film, the Predacons of the series discover a mysterious transwarp device that allows them to summon the monstrous from Cybertron's past to aid them. The Maximals then summon (referred to as "Convoy" in Japan, but not to be confused with the original Autobot Optimus) from prehistoric Earth prior to his becoming Transmetal. Optimus Primal then aided Lio Convoy in battling the demonic Transformer by combining the power of their Matrixes, transforming into "Flash Lio Convoy" and "Burning Convoy", they destroyed Majin Zarak and returned Optimus Primal to prehistoric Earth.

Many years later, after further battles of the Angolmois energy between and revealed its' true origin - the lifeforce of - the Chaos-Bringer was resurrected, and caused Big Convoy's Maximals to fall inside the same wormhole as Lio Convoy. There, Lio Convoy explained the nature of the threat and used what little was left of his power to help them escape. However, Lio Convoy was later able to escape himself, and aided Big Convoy and Magmatron in Unicron's eventual defeat, helping to bring about a new age of peace on Cybertron.

His first actual appearance in an American series was during 2006 in the first issue of 's "", sending on a mission as a double-agent infiltrating 's Predacons. However, he was not named; his first American toy was not yet released at the time. He had a Cybertronian redesign as in the storyline, Lio Convoy had yet to travel to Earth to become a lion. However, this Cybertronian form (except for his head) bore absolutely no resemblance to his Cybertronian form in the first two episodes of the Japanese animated series.

In the second "Beast Wars" mini-series produced by IDW, "The Ascending", he appears under the name of Lio Convoy, now transforming into his familiar white lion form. Receiving Razorbeast's signal from Earth (aided by a disembodied Magmatron), Lio took the Pack, an elite Maximal unit, to Earth to assist. They arrived in time to turn the tide of the Predacon assault, but was surprised when their commander, Ravage, brokered a truce between the two factions. He was, however, too late to stop Razorbeast being infected by .

, the co-author of the series, explained that he, editor and Ben Yee decided to use all names as they originally appeared “"for better or worse"” regardless of any changes made over the years. [ [http://simonfurman.wordpress.com/2007/08/15/aicool-dudes/#comments A.I.COOL DUDES « simon furman ] ]

*"Beast Wars Second" Lio Convoy (1998):According to the "Beast Wars Second" show bible Lio Convoy stands three meters tall and can run at 200 km/h in beast mode. With a toy standing twenty centimeters tall, the Lio Convoy toy is 1/15 scale. His toy was sold at retail in Asia and over the internet in North America. [ [http://web.archive.org/web/*/www.hasbrocollectors.com/product.cfm?product=4 Internet Archive Wayback Machine ] ] [http://www.bwtf.com/bws/toys/reviews/lioconvoy.shtml ]

*Robot Masters Lio Convoy (2005):A deluxe sized version of Lio Convoy. Lio Convoy appeared in this Japanese exclusive series with a new deluxe sized toy closely based on his original form. There was later a Dengeki Hobby Exclusive black recolor of the toy in Decepticon packaging based upon the black recolor of the original toy. Lio Convoy also appeared in the Robot Masters comic that was only available in Japan. [ [http://www.fantofan.jp/photo%20gallery/rm-blacklioconvoy.htm Dengeki Hobby Exclusive Robotmasters Black Lio Convoy ] ]

*Beast Tech Robot Fighters Lio Convoy:A Chinese made knockoff based on the original Lio Convoy toy was sold in discount stores. This toy is gold and grey colors, is slightly oversized and simplified.