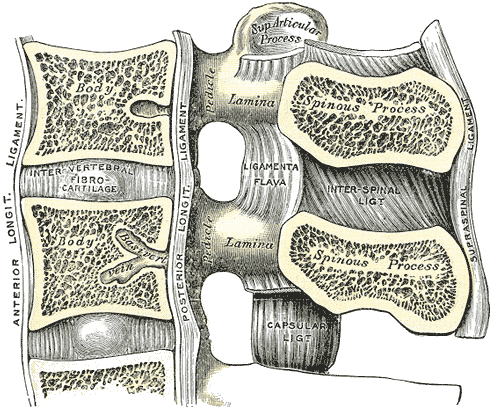 Caption2 = Posterior view of muscles connecting the upper extremity to the vertebral column. Nuchal ligament labeled in red at center.
From =
To =
Precursor =
System =
Artery =
Vein =
Nerve =
Lymph =
MeshName =
MeshNumber =
DorlandsPre = l_09
DorlandsSuf = 12493174
The supraspinal ligament (supraspinous ligament) is a strong fibrous cord, which connects together the apices of the from the to the ; at the points of attachment to the tips of the spinous processes is developed in the ligament.

It is thicker and broader in the lumbar than in the thoracic region, and intimately blended, in both situations, with the neighboring .

The most superficial fibers of this ligament extend over three or four vertebræ; those more deeply seated pass between two or three vertebræ while the deepest connect the spinous processes of neighboring vertebræ.

Between the spinous processes it is continuous with the .

It is continued upward to the and median , as the .