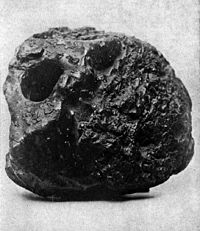 A coal torpedo. This example was prepared as a model, with a partial coal dust coating and the plug left out. It was found in Jefferson Davis' office by Union General Edward Ripley when Union forces captured Richmond in April 1865.

The coal torpedo was a hollow iron casting filled with explosives and covered in coal dust, deployed by the Confederate Secret Service during the American Civil War, and intended for doing harm to Union steam transportation. When shoveled into the firebox amongst the coal, the resulting explosion would at the very least damage the boiler and render the engines inoperable. At worst, a catastrophic boiler explosion would kill crewmen, plus passengers, start a fire, perhaps, even sink the vessel. 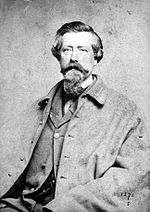 Thomas Courtenay in the uniform of a Confederate Army Captain.

The coal torpedo was invented by Capt. Thomas Edgeworth Courtenay of the Confederate Secret Service.[1][2] During the Civil War, the term torpedo was used to indicate a wide range of explosive devices including what are now called land mines, naval mines, improvised explosive devices, and booby traps. Northern newspapers referred to Courtenay's coal bombs as torpedoes, or sometimes "infernal machines"; Courtenay himself called it his "coal shell".[3]

The torpedoes were manufactured at the 7th Avenue Artillery shop (across the street from Tredegar Iron Works) in Richmond, Virginia, in January 1864.[4] The manufacturing process was similar to that used for artillery shells, except that actual pieces of coal were used as patterns for iron castings. The walls of the coal shell were about 3/8 inch thick, creating a hollow space inside sufficient to hold 3–4 ounces of gunpowder. After filling, the shell was closed with a threaded plug, then dipped in melted beeswax and rolled in coal dust, creating the appearance of a lump of coal.[5] Finished coal torpedoes were about 4 inches (10 cm) on a side and weighed 3–4 lb (1.5–2 kg). The size and powder charge of the coal torpedo was similar to a 6 pound Shrapnel shell (a hollow, four-inch cannonball containing gunpowder and 24 musket balls as shrapnel) or the equivalent of three Civil War-era hand grenades. Even so, the explosion of a coal torpedo under a ship's boiler would not by itself be sufficient to sink the vessel. The purpose of the coal torpedo was to burst the pressurized steam boiler, which had the potential to cause a tremendous secondary explosion. Boiler explosions were not uncommon in the early years of steam transportation, and often resulted in the complete destruction of the vessel by fire. In action, the coal torpedo would leave little evidence that a boiler explosion was due to sabotage. 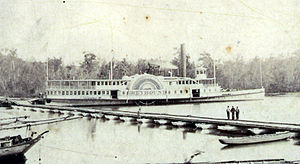 Courtenay was authorized to form a company of men to infiltrate enemy lines and place coal torpedoes in the coal piles used to fuel Union steam ships.[6] It was especially intended to be used against ships of the Union blockade, although Courtenay was authorized to act against any Union military or commercial shipping in Confederate waters.[7][8] Although the Union blockade and other forms of military shipping were Courtenay's primary targets, he also had plans to use the coal torpedo to attack steam locomotives, although no confirmed attacks are known to have been made.

On 19 March 1864, a Union gunboat captured a rebel courier crossing the Mississippi, carrying a letter from Courtenay describing the coal torpedo. The correspondence was forwarded to Admiral David Porter, who immediately issued his General Order 184, which began

The enemy have adopted new inventions to destroy human life and vessels in the shape of torpedoes, and an article resembling coal, which is to be placed in our coal piles for the purpose of blowing the vessels up, or injuring them. Officers will have to be careful in overlooking coal barges. Guards will be placed over them at all times, and anyone found attempting to place any of these things amongst the coal will be shot on the spot.[3]

In April 1865, most of the official papers of the Confederate Secret Service were burned by Secretary of State Judah P. Benjamin just before the government evacuated Richmond, making it impossible to determine with any certainty how many ships were destroyed by Courtenay's shell. Union Admiral Porter credited the coal torpedo with sinking the Greyhound, a private steamboat that had been commandeered by General Benjamin F. Butler for use as a floating headquarters on the James River.[1][9] Courtenay also took credit for the boiler explosion on the gunboat USS Chenango that killed 33 men, though the vessel itself survived and was repaired and returned to duty.[1][10] In the Spring of 1865, Canadian customs raided a house in Toronto that had been rented by Jacob Thompson, one of the commissioners of the Confederate Secret Service stationed in Canada. They found coal torpedoes and other incendiary devices hidden under the floorboards.[11] A former Confederate agent named Robert Louden claimed on his deathbed that he had used a coal torpedo to sink the steamboat Sultana, killing an estimated 1,800 of her 2,400 passengers, many of whom were recently freed Union prisoners of war, on April 27, 1865, although this claim is controversial.[6][12]

After the Civil War

Courtenay had traveled to England in 1864 and remained there until 1867, trying to sell the "secret" of the coal torpedo to foreign governments. He approached the British War Office, but they turned him down after he would not agree to allow them to examine his invention before purchasing it.[10] When Courtenay returned to the United States, one or more business partners to whom he had entrusted the secret remained in England. The Times in 1873 reported rumors that disreputable ship owners were purchasing coal torpedoes to put in their own ships as a form of insurance fraud, so that over-insured ships and cargo would sink while far out at sea, leaving no evidence.[13][14] Other reports scoffed at the rumors, suggesting they were false stories planted by supporters of Samuel Plimsoll, a Member of Parliament who was trying to pass a bill reforming the shipping industry.[15] Nothing was ever proven, but the reports stirred up popular interest in various supposed methods of sabotaging ships, and the coal torpedo even made an appearance in the short story, "That Little Square Box," by Arthur Conan Doyle, published in a story collection entitled The Captain of the Polestar, and other tales.

The Fenian Brotherhood, an Irish nationalist organization operating in the United States in the late 1860s–1870s, reportedly considered placing coal torpedoes in the furnaces of New York City hotels as well as English transatlantic steamships.[16]

Both the American OSS and the British SOE used forms of exploding coal in World War II.[17] The German commandos who came ashore on Long Island in 1943 as part of Operation Pastorius carried plastic explosives disguised as coal for use against coal-fired electric generating plants.[18] Such a German coal torpedo was given to the British double agent Eddie Chapman (also known as "Agent Zig-Zag") to sabotage the merchant ship City of Lancaster, but he passed it on to his MI5 handler instead.[19] Similar devices were also made by the Japanese during World War 2.[20]

Stanley Karnow hints in his book Vietnam: A History that the CIA prepared explosive coal for use against North Vietnamese railways during the Vietnam War.[21]