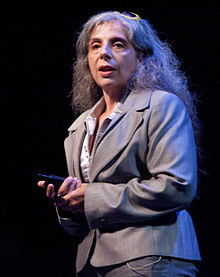 Adams presenting at TEDxHouston in June 2011

Constance Adams is an architect who now works in the space program.

Adams studied sociology at Harvard University, then went on to Yale University, where she completed a master's degree in architecture. After a two-year apprenticeship with Kenzo Tange Associates in Tokyo, followed by four years working in Berlin on commercial and master planning projects, she was employed by the Johnson Space Center in Houston, Texas, where she now lives with her daughter.[citation needed] .

Among other projects, Adams was involved in developing the Lockheed-Martin design[citation needed] of an inflatable module for the International Space Station. The module, known as TransHab ("transit habitat"), was designed to provide living quarters for astronauts aboard the space station, including a common room, gymnasium, shower, etc. Budget considerations and delays, as well as politics, meant that the module failed to develop beyond the design stage.[citation needed]

In 2005 Adams was named an Emerging Explorer by National Geographic.[1]

"A spaceship is a delicately balanced environment. Every element that doesn't contribute to the overall functioning of the system is by definition working against it. The same is true of our planet – our mothership – though sadly, most architecture today is slowly fatal to nature's systems." (Constance Adams)

"If you can't visualize it, don't build it." (Constance Adams)

5. "Habitability as a Tier One Criterion in Exploration Mission and Vehicle Design",1999, NASA Technical Reports Server