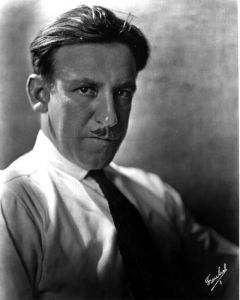 Tod Browning (, &ndash; , ) was an American motion picture , director and .

Browning's career spanned the silent and talkie eras. Best-known as the director of "Dracula" (1931), the cult classic "Freaks" (1932), and classic silent movie collaborations with , Browning directed many movies in a wide range of genres.

He was born Charles Albert Browning, Jr., in , the second son of Charles Albert and Lydia Browning. As a young boy, he put on amateur plays in his backyard. He was fascinated by the circus and carnival life, and at the age of 16 he ran away from his well-to-do family to become a performer.

Changing his name to "Tod", he traveled extensively with s, carnivals, and circuses. His jobs included working as a talker (barker, as the term is also known isn't correct) for the , performing a live burial act in which he was billed as "The Living Corpse", and performing as a with the Ringling Brothers Circus. He would draw on this experience as inspiration for some of his film work.

He performed in as an , magician, , etc. He appeared in the "Mutt and Jeff" and "The Lizard and the Coon" acts, and in a act titled "The Wheel of Mirth" alongside comedian Charles Murray.

Beginnings of a film career

Later, while Browning was working as director of a variety theater in , he met . He began acting along with Murray on single-reel nickelodeon comedies for Griffith and the Biograph company.

In 1913 Griffith split from Biograph and moved to . Browning followed and continued to act in Griffith's films, now for Reliance-Majestic Studios, including a stint as an extra in the epic "Intolerance". Around that time he began directing, eventually directing 11 short films for Reliance-Majestic. Between 1913 and 1919, Browning would appear as an actor in approximately fifty motion pictures.

In June of 1915, he crashed his car at full speed into a moving train. His passengers were film actors and . Booth was killed instantly, while Seigmann and Browning suffered serious injuries, including in Browning's case a shattered right leg and the loss of his front teeth. During his convalescence, Browning wrote scripts, and did not return to active film work until 1917.

Browning's feature film debut was "" (1917), about a captain who sacrifices himself to save his passengers from a fire. It was well-received.

Browning moved back to New York in 1917. He directed two films for Metro Studios: "" and "", both starring , the latter in a dual role achieved with techniques that were groundbreaking for the time. He moved back to California in 1918 and produced two more films for Metro: "" and "Revenge".

In the spring of 1918 he left Metro and joined Bluebird Productions, a subsidiary of Universal Pictures, where he met . Thalberg paired Browning with for the first time for the film "" (1919), a melodrama in which Chaney played a thief who forces a poor girl from the slums into a life of crime. Browning and Chaney would ultimately make ten films together over the next decade.

The death of his father sent Browning into a depression that led to alcoholism. He was laid off by Universal and his wife left him. However, he recovered, reconciled with his wife, and got a one-picture contract with . The film he produced for MGM, "", was a moderate success, putting his career back on track.

Thalberg reunited Browning with Lon Chaney for "The Unholy Three" (1925), the story of three circus performers who concoct a scheme to con and steal jewels from rich people using disguises. Browning's circus experience shows in his sympathetic portrayal of the es. The film was a resounding success, so much so that it was later remade in 1930 as Lon Chaney's first (and only) talkie. Browning and Chaney embarked on a series of popular collaborations, including "The Blackbird" and "The Road to Mandalay". "The Unknown" (1927), featuring Chaney as an armless knife thrower and as his scantily-clad carnival girl obsession, was originally titled "Alonzo the Armless" and could be considered a precursor to "" in that it concerns a love triangle involving a circus freak, a beauty, and a strongman. "London After Midnight" (1927) was Browning's first foray into vampire film and is a highly sought-after which starred Chaney, , and . The last known print of "London After Midnight" was destroyed in an studio fire in 1965. In 2002, a photographic reconstruction of "London After Midnight" was produced by for . Browning and Chaney's final collaboration was "Where East is East" (1929), of which only incomplete prints have survived. Browning's first talkie was "The Thirteenth Chair" (1929), which was also released as a silent and starred .

After Chaney's death in 1930, Browning was hired by Universal Pictures to direct "Dracula" (1931). Although Browning wanted to hire an unknown European actor for the title role and have him be mostly offscreen as a sinister presence, budget constraints and studio interference necessitated the casting of Bela Lugosi and a more straightforward approach. Although the film is now considered a classic, at the time Universal was unhappy with it and preferred the Spanish-language version filmed on the same sets at night.

After directing the boxing melodrama "The Iron Man" (1931), he began work on "Freaks" (1932). Based on the short story "Spurs" by Clarence Aaron "Tod" Robbins, the screenwriter of "The Unholy Three", the film concerns a love triangle between a wealthy dwarf, a gold-digging aerialist, and a strongman; a murder plot; and the vengeance dealt out by the dwarf and his fellow circus freaks. The film was highly controversial, even after heavy editing to remove many disturbing scenes, and was a commercial failure. Browning's career was derailed.

Browning found himself unable to get his requested projects greenlighted. After directing the drama "Fast Workers" (1933) starring John Gilbert, who was also not in good standing with the studio, he was allowed to direct a remake of "London After Midnight", originally titled "Vampires of Prague" but later retitled "" (1935). In the remake, the roles played by Lon Chaney in the original were split between and Bela Lugosi (spoofing his Dracula image).

After that, he directed "" (1936), originally titled "The Witch of Timbuctoo", from a script he wrote himself. It starred Lionel Barrymore as an escapee from an island prison who avenges himself on the people who imprisoned him using living "dolls" who are actually people shrunk to doll-size and magically placed under Barrymore's hypnotic control. Browning's final film was the murder mystery "Miracles for Sale" (1939).

After "Miracles for Sale", Browning did some scenario work for MGM. In 1942 he retired and moved to Malibu. He became such a recluse that soon after his wife died in 1944, "Variety" accidentally published an obituary for him. Even his neighbors rarely saw him. In the late 1950s he developed throat cancer, necessitating tongue surgery. When his brother Avery died in 1959, he attended the funeral from a private room and would not let family members see him.

Tod Browning was found dead at age 81, on , , in the bathroom of some friends in Malibu. He is interred in , Los Angeles.