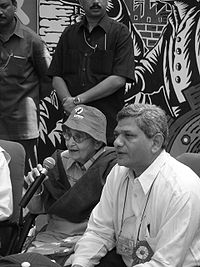 Lakshmi Sahgal (bottom left) in 2005 with a member of the Politburo of the CPI (Marxist) Sitaramom Echuri at a news conference.

A doctor by profession, Captain Lakshmi came into the limelight in India towards the end of World War II for her role as the commander of the Rani of Jhansi Regiment of the INA and her role as a minister in Subhas Bose's Azad Hind government. She later became involved in politics in independent India, serving as a member of parliament in the Upper House and later running for President as a left wing candidate. Lt Col Swaminathan is commonly referred to as Captain Lakshmi in India, referring to her rank at the time of being taken prisoner in Burma, as widely reported in Indian newspapers at the end of the war and which captured the public imagination, as opposed to her not widely known promotion in the last days of Azad Hind.

Sahgal was born as Lakshmi Swaminathan, daughter of Dr S. Swaminathan, a leading lawyer practising Criminal Law at Madras High Court. Her mother was A.V. Ammukutty, better known as Ammu Swaminathan, a social worker and independence activist and hailed from the famous Vadakkath family of Anakkara in Palghat, Kerala. A.V. Kutty Malu Amma was another well known freedom fighter from the same family.

Lakshmi decided to study medicine because she wanted to be of service to the poor, especially to poor women.[citation needed] As a result, she received an MBBS degree from Madras Medical College in 1938. A year later, she received her diploma in gynaecology and obstetrics.

In 1940,she left for Singapore where she established a clinic for the poor, mostly migrant labour, from India. She was not only a doctor but also played an active role in the India Independence League.

In 1942, during the surrender of Singapore by the British to the Japanese, she worked in serving the prisoners of war who were wounded during the fighting. In the process, she came in contact with Indian Prisoners of War (POWs) who were thinking of forming an Indian liberation army.

Subhas Chandra Bose arrived in Singapore on July 2, 1943. In the next few days, at all his public meetings, Netaji spoke of his determination to raise a women's regiment, the Rani of Jhansi Regiment, which would also "fight for Indian Independence and make it complete".[citation needed]

Lakshmi joined the new regiment, called the Rani of Jhansi Regiment. She was given the rank of a Colonel[citation needed]. The unit had the strength of a Brigade. In a regular army, this women's army unit was the first of its kind in Asia. The army fought on the side of the Axis powers against the British.

Lakshmi was active both militarily and on the medical front. Later, she became the Minister in charge of Women's Organization in Arzi Hukumate Azad Hind (Provisional Government of Free India), led by Subhash Chandra Bose. She held this portfolio over and above her command of the Rani of Jhansi Regiment.

After marrying Colonel Prem Kumar Sahgal, the couple settled down in Kanpur. She carried on with her medical profession and served the refugees who were arriving in large numbers following the Partition of India.

In 1971 she joined the Communist Party of India (Marxist) and represented the party in the Rajya Sabha. During the Bangladesh crisis she organised relief camps and medical help in Calcutta for Bangladesh refugees who streamed into India at the time. She was nominated the Left Front's candidate for post of President of India in 2002.Later she became a leader of the All India Democratic Women's Association.

Colonel Prem Kumar Sahgal was among those who were released from the Red Fort by the British. In March 1947, Colonel Sahgal and Captain Lakshmi were married in Lahore, British India. Colonel Sahgal was the son of Justice Achhru Ram Sahgal. After their marriage, they settled in Kanpur.

Her daughter Subhashini Ali is a prominent communist politician and a labour activist. According to her daughter, Sahgal is an atheist.[1]

In 1998, she was awarded the Padma Vibhushan by the President of India.