The Efficiency Movement was a major movement in the United States, Britain and other industrial nations in the early 20th century that sought to identify and eliminate waste in all areas of the economy and society, and to develop and implement best practices.[1] The concept covered mechanical, economic, social, and personal improvement.[2] The quest for efficiency promised effective, dynamic management rewarded by growth.[3]

The Efficiency Movement played a central role in the Progressive Era in the United States, where it flourished 1890-1932.[4] Adherents argued that all aspects of the economy, society and government were riddled with waste and inefficiency. Everything would be better if experts identified the problems and fixed them. The result was strong support for building research universities and schools of business and engineering, municipal research agencies, as well as reform of hospitals and medical schools, and the practice of farming.[5] Perhaps the best known leaders were engineers Frederick Winslow Taylor (1856–1915), who used a stopwatch to identify the smallest inefficiencies, and Frank Bunker Gilbreth, Sr. (1868–1924) who proclaimed there was always "one best way" to fix a problem.

Leaders such as Herbert Croly, Charles van Hise and Richard Ely sought to improve governmental performance by training experts in public service comparable to those in Germany, notably at the Universities of Wisconsin and Pennsylvania. Schools of business administration set up management programs oriented toward efficiency.[6]

State governments were active as well. For example, Massachusetts set up its "Commission on Economy and Efficiency" in 1912. It made hundreds of recommendations.[8]

Leading philanthropists such as Andrew Carnegie[9] and John D. Rockefeller actively promoted the efficiency movement. In his many philanthropic pursuits, Rockefeller believed in supporting efficiency. He once said,

"To help an inefficient, ill-located, unnecessary school is a waste...it is highly probable that enough money has been squandered on unwise educational projects to have built up a national system of higher education adequate to our needs, if the money had been properly directed to that end."[10]

The Massachusetts Commission on Economy and Efficiency reflected the new concern with conservation. It said in 1912:

"The only proper basis for the protection of game birds, wild fowl and, indeed, all animals is an economic one, and must be based upon carefully constructed and properly enforced laws for the conservation of all species for the benefit of future generations of our citizens, rather than based on local opinion....This expenditure for the protection of fish and game is clearly a wise economy, tending to prevent the annihilation of birds and other animals valuable to mankind which might otherwise become extinct. It may be said that Massachusetts and her sister States have suffered irreparable loss by carelessly allowing, for generations past, indiscriminate waste of animal life."[12]

President Roosevelt was the nation's foremost conservationist, putting the issue high on the national agenda by emphasizing the need to eliminate wasteful uses of limited natural resources. He worked with all the major figures of the movement, especially his chief advisor on the matter, Gifford Pinchot. Roosevelt was deeply committed to conserving natural resources, and is considered to be the nation's first conservation President.[13] 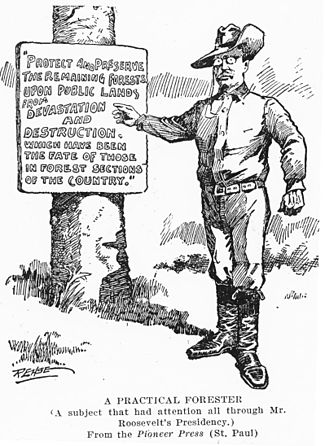 In 1908, Roosevelt sponsored the Conference of Governors held in the White House, with a focus on natural resources and their most efficient use. Roosevelt delivered the opening address: "Conservation as a National Duty."

in contrast, environmentalist John Muir promulgated a very different view of conservation, rejecting the efficiency motivation. Muir instead preached that nature was sacred and humans are intruders who should look but not develop. Working through the Sierra Club he founded, Muir tried to minimize commercial use of water resources and forests.[14] While Muir wanted nature preserved for the sake of pure beauty, Roosevelt subscribed to Pinchot's formulation, "to make the forest produce the largest amount of whatever crop or service will be most useful, and keep on producing it for generation after generation of men and trees." [15]

In U.S. national politics, the most prominent figure was Herbert Hoover, a trained engineer who downplayed politics and believed dispassionate, nonpolitical experts could solve the nation's great problems, such as ending poverty.[16]

After 1929, Democrats blamed the Great Depression on Hoover and helped to somewhat discredit the movement, though the demand for efficiency and elimination of waste remains an important component of American values.

Boston lawyer Louis Brandeis (1856–1941) argued bigness conflicted with efficiency and added a new political dimension to the Efficiency Movement‎. As early as 1895 he had warned of the harm that giant corporations could do to competitors, customers, and their own workers. The growth of industrialization was creating mammoth companies which he felt threatened the well-being of millions of Americans.[17] In "The Curse of Bigness" he argued, "Efficiency means greater production with less effort and at less cost, through the elimination of unnecessary waste, human and material. How else can we hope to attain our social ideals?."[18]

The Bedaux system, developed by American entrepreneur Charles Bedaux (1887–1944) combine elements of Taylorism and Fordism and was especially influential in Germany. The Bedaux system represented a method of time and motion studies with aspects of both wage management and business management. For wages, the system promoted premiums for extra performance on top of a guaranteed hourly wage. The Bedaux system tried to reconfigure management and accounting, with an emphasis on controlling costs. It covered both blue- and white-collar workers, and especially middle managers. During the 1920s-1990s worldwide there were about one thousand companies in 21 countries that were run according to Bedaux, including giants such as Swift meatpacking, Eastman Kodak cameras, B.F. Goodrich rubber, DuPont chemicals, and General Electric. In addition there were numerous users in Britain, France and Germany.[19]

Relation to other movements

Later movements had echoes of the Efficiency Movement and were more directly inspired by Taylor and Taylorism. Technocracy, for instance, more of a fad than a movement, and others flourished in the 1930s and 1940s.

Postmodern opponents of nuclear energy in the 1970s broadened their attack to try to discredit movements that saw salvation for human society in technical expertise alone, or which held that scientists or engineers had any special expertise to offer in the political realm.

In engineering, the concept of efficiency was developed in Britain in the mid-18th century by John Smeaton (1724–1792). Called the "father of civil engineering", he studied water wheels and steam engines.[20] In the late 19th century there was much talk about improving the efficiency of the administration and economic performance of the British Empire.[21]

National Efficiency was an attempt to discredit the old-fashioned habits, customs and institutions that put the British at a handicap in competition with the world, especially with Germany,[22] which was seen as the epitome of efficiency.[23] In the early 20th century, "National Efficiency" became a powerful demand — a movement supported by prominent figures across the political spectrum who disparaged sentimental humanitarianism and identified waste and model as witnesses a mistake that could no longer be tolerated. The movement took place in two waves; the first wave from 1899 to 1905 was made urgent by the inefficiencies and failures in the Second Boer War (1899–1902). Spectator magazine reported in 1902 there was "a universal outcry for efficiency in all departments of society, in all aspects of life".[24] The two most important themes were technocratic efficiency and managerial efficiency. As White (1899) argued vigorously, the empire needed to be put on a business footing and administered to get better results. The looming threat of Germany, which was widely seen as a much more efficient nation, added urgency after 1902. Politically National Efficiency brought together modernizing Conservatives and Unionists, Liberals who wanted to bring modernize their party, and Fabians such as George Bernard Shaw and H. G. Wells, along with Beatrice and Sidney Webb, who had outgrown socialism and saw the utopia of a scientifically up-to-date society supervised by experts such as themselves. Churchill in 1908 formed an alliance with the Webbs, announcing the goal of a "National Minimum", covering hours, working conditions, and wages – it was a safety net below which the individual would not be allowed to fall.[25][26]

Representative legislation included the Education Act of 1902, which emphasized the role of experts in the schools system. Higher education was an important initiative, typified by the growth of the London School of Economics, and the foundation of Imperial College.[27]

There was a pause in the movement between 1904 and 1909, when interest resumed. The most prominent new leaders included Liberals Winston Churchill and David Lloyd George, whose influence brought a bundle of reform legislation that introduced the welfare state to Britain.

Much of the popular and elite support for National Efficiency grew out of concern for Britain's military position, especially with respect to Germany. The Royal Navy underwent a dramatic modernization, most famously in the introduction of the Dreadnought, which in 1906 revolutionized naval warfare overnight.

In Germany the efficiency movement was called "rationalization" and it was a powerful social and economic force before 1933. In part it looked explicitly at American models, especially Fordism.[28] The Bedaux system was widely adopted in the rubber and tire industry, despite strong resistance in the socialist labor movement to the Bedaux system. Continental AG, the leading rubber company in Germany, adopted the system and profited heavily from it, thus surviving the Great Depression relatively undamaged and improving its competitive capabilities. However most German businessmen preferred the home-grown REFA system which focused on the standardization of working conditions, tools, and machinery.[29]

"Rationalization" meant higher productivity and greater efficiency, promising science would bring prosperity. More generally it promised a new level of modernity and was applied to economic production and consumption as well as public administration. Various versions of rationalization were promoted by industrialists and Social Democrats, by engineers and architects, by educators and academics, by middle class feminists and social workers, by government officials and politicians of many parties. It was ridiculed by the extremists in the Nazi and Communist movements. As ideology and practice, rationalization challenged and transformed not only machines, factories, and vast business enterprises but also the lives of middle-class and working-class Germans.[30]

W. Edwards Deming (1900–1993) brought the efficiency movement to Japan after World War II, teaching top management how to improve design (and thus service), product quality, testing and sales (the last through global markets), especially using statistical methods. Deming then brought his methods back to the U.S. in the form of quality control called Continuous improvement process.[31]